Plenty of digital space has been devoted to right-wing criticisms of the COVID-19 response, ranging from pedestrian concerns about proportionality to wild conspiracy theories invoking the Book of Revelation.

But when it comes to claims of anti-Christian persecution, it’s hard to beat Bishop Athanasius Schneider for sheer imagination.

The Kazakhstani auxiliary bishop has appeared more than once on infamous Catholic news outlet LifeSite News since the pandemic began, sharing his various opinions on what the COVID crisis means, why it’s happening, and how it should be handled within the Church. 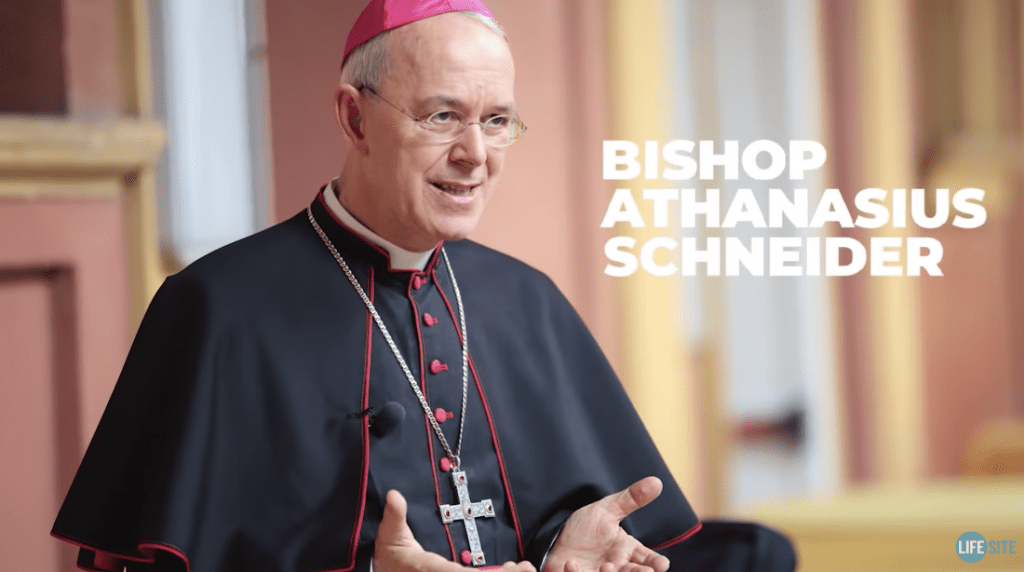 Like many other religious leaders, he doesn’t think quarantine orders should apply to him and his sect:

It’s not clear whether Schneider is being disingenuous on purpose, or if he genuinely believes that a religious gathering is as necessary for human survival as food.

But he’s taken it a step further and made it personal: In a talk before last week’s virtual Rome Life Forum, he came right out and called his fellow bishops “fake shepherds” if they decided to close their churches in accordance with social-distancing guidelines and regulations:

The unbelievable fact was that in the midst of this worldwide ban of the public Holy Mass, many bishops even before the government banned public worship issued decrees by which they not only forbade the public celebration of Holy Mass, but of any other sacrament as well.

It’s not clear what advantage he thinks these “fake shepherds” stood to gain by closing down their churches, unless it’s the advantage of not spreading a deadly disease throughout the diocese — a trivial concern, Schneider seems to indicate.

And if that’s not theatrical enough for your tastes, he went back through two millennia of Christian history to invoke the era of early Christian persecution in Rome, when the faithful are said to have celebrated worship rites in the catacombs to avoid detection:

In many countries, and especially in predominantly Catholic countries, this prohibition [the COVID lockdown] was enforced in such a systematic and brutal way, that it seemed as though the ruthless historical persecutions of the Church were brought back. An atmosphere of the catacombs was created with priests celebrating Holy Mass in secrecy with a group of the faithful.

(It’s worth mentioning that the catacombs probably weren’t used that way in early Christianity, and some historians question how much of the early Christian persecution narrative is little more than myth.)

To instruct his brother bishops on how they should be responding to the threat of COVID-19, Schneider looks back to an earlier plague, that of sixteenth-century Italy:

In the time of the plague, which had an incomparably higher mortality rate as the current epidemic of COVID-19, St. Charles Borromeo increased the number of the public celebrations of Holy Mass. Even though he closed the churches for a while, he at the same time ordered that there should be Masses celebrated in many public and open places, such as squares, crossroads, street corners. He obliged the priests to visit the sick and the dying to administer them the sacraments of Penance and of Extreme Unction. He ordered public processions to be held, in which people walked in due distance, to make reparation for the sins and invoke Divine Mercy.

St. Charles Borromeo did not forget the care for the body of the infected people, but at the same time his primary concern was the spiritual help of the sacraments, with which the sick had to be strengthened.

It’s incredible to think that Schneider believes modern churches should model their coronavirus response plans on the actions of a historical figure who had no idea how to stop people from contracting the plague or dying from it.

The bishop’s flair for the dramatic would be admirable if it weren’t so dangerous.

All that is to say nothing of why Schneider believes coronavirus has stricken the world in the first place. In a conversation with LifeSite editor John-Henry Westin, Schneider shared his opinion that the virus is a “divine appeal” calling on the faithful to repent the sins of the Church, “a punishment of a loving Father” designed to bring his children closer to him.

If Schneider sees this as the act of a loving parent, I’m suddenly extremely grateful for priestly celibacy.

When Schneider speaks of the Church’s recent sins, surely he’s talking about some very serious misconduct, right? The sexual abuse of children, perhaps? Or the cruelty inflicted on LGBTQ people through conversion therapy and familial rejection? Well, not exactly.

[Repentance is needed] because of the mistreatment of Our Lord in the Holy Eucharist, the reception of Holy Communion in the hand, which leads to the trampling of Jesus in the various particles left over in people’s hands and therefore brushed onto the floor.

In more than two thousand years of church history, this is surely the worst thing the Catholic Church has ever done.

Consequently, Schneider has some recommendations for how Pope Francis might play his part in ending COVID-19 and ensuring no such plague descends on humanity again:

One could suggest that the Pope, together with cardinals and bishops, carry out a public act of reparation in Rome for the sins against the Holy Eucharist, and for the sin of the acts of religious veneration to the Pachamama statues.

Once the current tribulation has ended, the Pope should issue concrete liturgical norms, in which he invites the entire Church to turn again towards the Lord in the manner of celebration, i.e. celebrant and faithful turned in the same direction during the Eucharistic prayer. The Pope should also forbid the practice of Communion in the hand, for the Church cannot continue unpunished to treat the Holy of Holies in the little sacred Host in such a minimalistic and unsafe manner.

That ought to help a great deal. Thanks bunches, Athanasius. 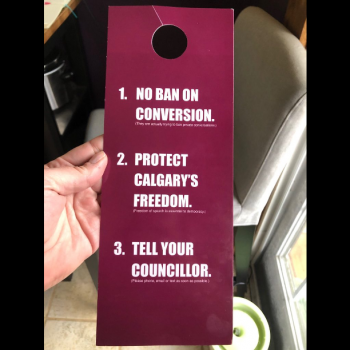 May 24, 2020 Christian Heritage Party Peppers Calgary With Conversion Therapy Propaganda
Browse Our Archives
What Are Your Thoughts?leave a comment