More evidence of the superior morality that religion bestows on its followers comes to us from South Korea:

Prosecutors raided facilities of Shincheonji, a minor religious sect, on Friday as part of their ongoing probe into allegations that the group hindered state efforts to contain the new coronavirus in the early stages of the pandemic.

Some 100 investigators took part in the raids into the secretive group’s branches nationwide, to seize materials in connection with the charges brought against the group’s founder, Lee Man-hee. …

The raid marks the prosecution’s first forcible investigation into the group since February when a group of people who claimed to be victims of the religious group filed a complaint against the 89-year-old Lee for embezzlement, dereliction of duty and violation of infectious disease prevention laws.

Shincheonji’s central theology is that Lee is the second coming of Jesus Christ. He has made his followers believe that the Bible consists chiefly of mysterious metaphors that only he can decipher.

That particular derangement is perhaps harmless, but we can’t say the same for the sect’s behavior after the initial cases of COVID-19 came to light.

As the disease spread among Shincheonji’s members and thousands of others, the group’s founder and leaders refused to get tested, citing their religious beliefs to privacy, resulted in a national outcry against the group. Shincheonji members also resisted government attempts at tracking the spread of pandemic and implementation of social distancing rules.

The New York Times interviewed former members who divulged that

Worshipers sit packed tightly on the floor and attend even when sick. … “We were taught not to be afraid of illness,” said Lee Ho-yeon, who left the church in 2015. A church leader boasted to followers on Feb. 9 that although hundreds of people had died in Wuhan, China, where the outbreak began, no Shincheonji worshipers there became sick.

God will protect us! We are invincible!

The Korea Herald reports that the Shincheonji sect caused almost half the country’s 11,000-plus known coronavirus cases, but an archived page from the Korea Centers for Disease Control and Prevention claims the correct percentage is 60.

Lee Man-hee, who has apologized on TV for “unintentionally” spreading the virus, was recently charged with homicide and inflicting injury, as were other leaders of the 240,000-strong sect.

If only such a thing were possible in the United States.

As the country has suffered war and deprivation in the past century, 120 self-styled messiahs promising a new world of peace have emerged, 70 commanding sizable followings. … Some ended up in jail on fraud or rape charges or lived in disgrace after the rapture they had promised never came. But their apostles split and spread, rebranding themselves into new sects.

Much like a mutating virus, when you think about it. 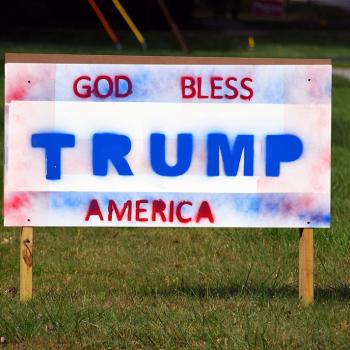 May 23, 2020
Listen to These Former Evangelical Republicans Explain Why They Left the GOP
Next Post

May 23, 2020 Alaska School Board Eats Crow, Restores Students' Access to Five Great Books
Browse Our Archives
What Are Your Thoughts?leave a comment