This morning, Joe Biden said something stupid. (Surprise.) He claimed, perhaps jokingly, on a morning radio talk show with a predominantly black audience, “If you have a problem figuring out whether you’re for me or Trump, then you ain’t black.” And then, he apologized for it because it wasn’t funny, it wasn’t accurate, and what-the-hell-are-you-doing-Joe?

A Democratic slip-up will always get more coverage than a Republican fuck-up.

All you have to do is shut up and let the Biden clip speak for itself. 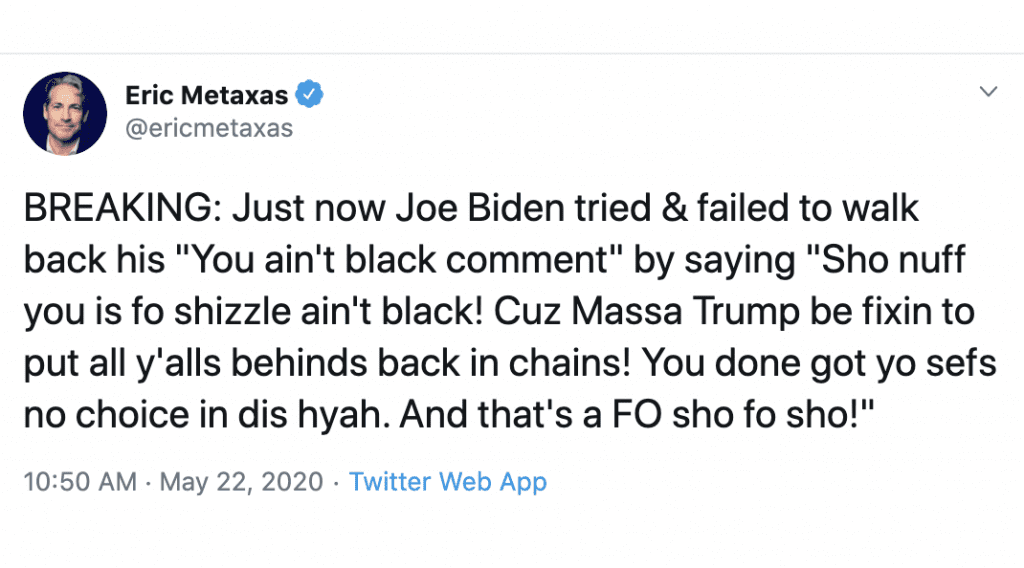 BREAKING: Just now Joe Biden tried & failed to walk back his "You ain't black comment" by saying "Sho nuff you is fo shizzle ain't black! Cuz Massa Trump be fixin to put all y'alls behinds back in chains! You done got yo sefs no choice in dis hyah. And that's a FO sho fo sho!"

This is why there’s no conservative version of The Daily Show. Conservatives aren’t funny or clever. Their response to a racist comment is to be waaaaaay more racist. Unlike Biden, Metaxas hasn’t apologized. That tweet is still up. He’s just retweeting supportive comments now.

But there are some interesting responses:

He is being racist

Have a blessed Friday.

Eric, this isn’t funny. This is the Twitter equivalent of Blackface.

If I have ever seen a career destroying tweet, it is this one. Seriously, dude, either delete it or go burn a cross.

On the other hand – are you with some right-wing media group? Cause then this will just be found funny by your, shall I say, racist fans.

When you accepted Trump as your lord and savior, did it come with a complimentary white hood? This is disgusting, no matter what point you were trying to make. You grieve God with this nonsense, but then, God was only a money-making tool for you, right?

All of this comes just days after Metaxas claimed the only reason people were anti-racist was because of the Bible.

I guess that means he’s never read it. 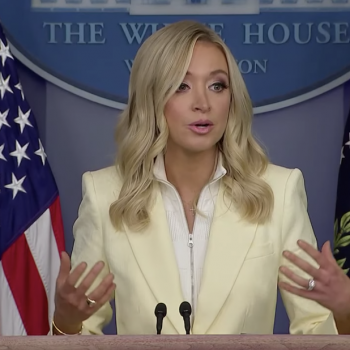