Eric Metaxas: People Are Only Anti-Racism and Anti-Slavery Because of the Bible May 21, 2020 Hemant Mehta

Eric Metaxas: People Are Only Anti-Racism and Anti-Slavery Because of the Bible

Do you oppose slavery? Do you oppose racism? Then you owe a debt of gratitude to the Bible, because, according to Christian author Eric Metaxas, no one would be anti-slavery and anti-racism without it.

He explained all this to pastors of Godspeak Calvary Chapel and right-wing activist Charlie Kirk, none of whom had the guts to challenge him on his lies.

By the way, [abolitionist William Wilberforce] could say, “oh, yeah, and we’re a Christian nation,” right? You’re Christians, right? Right? OK, well, let me explain to you what that means. It means we have to abolish slavery. It means this is evil, that this is wrong. Now, it was a long campaign, but where did he get these ideas? Where did the other abolitionists get these ideas? They got these ideas from the Scripture.

And so those of us who are Christians have to understand that anybody who’s against racism, anyone who is against slavery, any who’s against any of this bad stuff, you know, you can use that to explain to them, yes, and guess why you’re against that? Guess why this culture knows racism is wrong? We got it from the Bible.

And by the way, that’s a fact.

You don’t need to like it, you don’t need to be a Christian, but that’s a historical fact. There’s no way around that, that the idea of abolishing slavery, the idea that slavery is wrong, all these ideas worked their way through history and they come from Scripture. And a man named Wilberforce was chosen by God to drag these ideas into the center of culture.

And by the way, they’ve been there ever since. So that every woke agnostic in Sweden knows I’m supposed to help the poor, racism is wrong. They all seem to know this. But why? Why do you help the poor? Tell me, where’d you get that idea from? They don’t know. Well, I’m here to to remind you to remind them, there’s no other place you get that idea.

This David Barton-esque revisionist history suggests no one ever spoke out against racism and slavery until the Bible — which has been repeatedly used throughout history to defend racism and slavery — came along. It’s even more ignorant when you realize Metaxas and Kirk are vocal backers of Donald Trump, whose racism has never been hidden.

It’s true that many abolitionists were inspired by the Bible, but so were their opponents. And the arguments that took place in the 1800s were no different than the ones we have today, with each side claiming the other was misinterpreting Scripture and bringing shame to Christianity itself.

As the late progressive Christian Rachel Held Evans wrote a few years ago, speaking of this very issue,

… the pro-slavery side had more going for it in the way of proof texts. Slavery apologists could cite passages like Genesis 17:2, Deuteronomy 20:10-11, 1 Corinthians 7:21, Ephesians 6:1-5, Colossians 3:18-25; 4:1, and I Timothy 6:1-2 to support their case. They pointed out that slavery was practiced by the people of Israel and regulated by God, and that Jesus never said a word against slaveholding.

Metaxas — no shock here — is cherry picking passages in order to downplay all the ways the Bible has been used to justify both racism and slavery. More to the point, there are people who work to end both scourges in places where the Bible plays no significant role.

The Bible has done far more harm than good in those areas. But Metaxas, the right-wing historian, is eager to distort the past in his favor even when he’s the very kind of person Wilberforce would have opposed if he lived today. 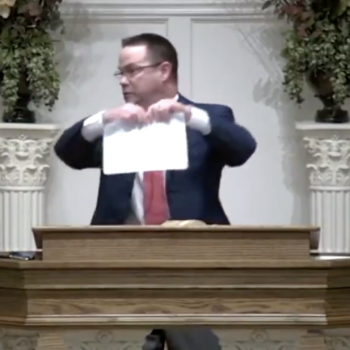 May 21, 2020
Baltimore Pastor Tears Up Cease-and-Desist Order in Front of Overcrowded Church
Next Post 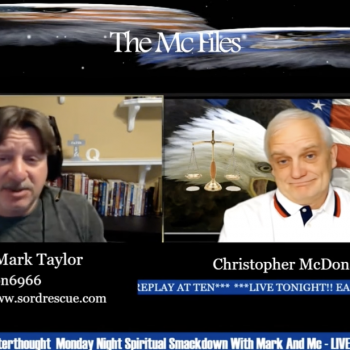 May 21, 2020 Mark Taylor: We Must Have Faith in God That Obama Will Be Executed for Treason
Browse Our Archives
What Are Your Thoughts?leave a comment