Back in March, because they were not permitted to give an invocation inside the State Capitol to open a session, members of the Washington state chapter of The Satanic Temple held an “infernal ritual” outside the building.

There were Christian Nationalists staging a counter-protest as well. They were led by domestic terrorist and lawmaker State Rep. Matt Shea (below), best known for his “Biblical Basis for War” manifesto and for proposing the creation of a 51st state just for Christians. 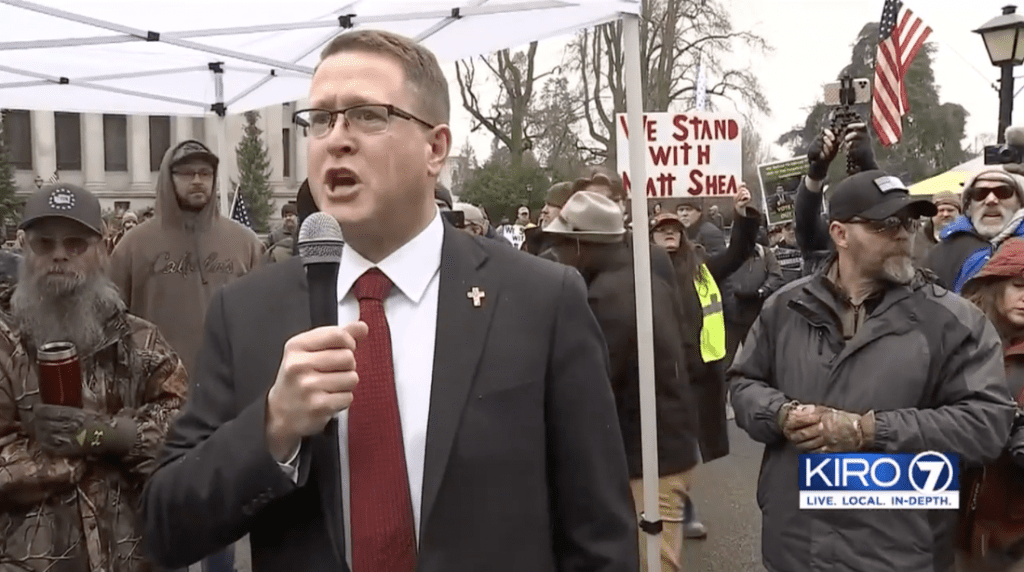 While his rhetoric was overwhelmed by the Satanists’ protest, Shea proceeded to pour olive oil on the steps of the Capitol… perhaps to anoint the place with Jesus or some religious nonsense like that.

Whatever the reason, it did a shit-ton of damage. And now the state has sent Shea a repair and clean-up bill for $4,761.34.

Shea, a Republican from the Spokane Valley, is being billed $4,761.34 for damage to the steps and base of Legislative Building North, Department of Enterprises (DES) spokeswoman Linda Kent said.

Shea can be seen on separate surveillance video carrying a bottle of olive oil through Capitol hallways, on Capitol grounds and on the stone steps that ended up stained. In some of the videos he is trailed by a group of men wearing black leather vests emblazoned with crucifixes. Several of the men carry shofars, or rams horns.

“Special care must be taken when cleaning and repairing historic masonry such as the masonry of the Legislative Building,” Kent said. “There is considerable science involved in the preservation and cleaning of historic masonry.”

Oof. A costly bill and invoking science. It’s a double whammy. But it’s also deserved. Vandalism in the name of Jesus doesn’t make it okay.

Shea didn’t respond to reporters for comment, but The Satanic Temple sure as hell did. Spokesperson Lucien Greaves told me this about the incident:

… this brings to question Mr. Shea’s state of mind, his ability to distinguish reality from fantasy, and his competence in acting appropriately in ways that do not threaten the safety of himself or others.

But while one might reasonably question whether or not Mr. Shea should at least temporarily be denied access to sharp objects and his own bank account pending further evaluation, there is no question that anybody possessed of Mr. Shea’s flagrant antipathy towards the most fundamental principles of the United States Constitution should not be holding the office of one charged with upholding those principles.

If Mr. Shea is so offended by our First Amendment guarantees that he finds it impossible to accept public religious expression that does not align with his own, then I hope the people of Washington will demand his immediate resignation.

This is America, Mr. Shea.

Love it or leave it.

He’s right about the demand. There’s no reason anyone like Shea should be in politics. He’s a disgrace to a party that already recruits its lawmakers from the bottom of the barrel. If he cared about Washington more than himself, he would have resigned a long time ago. It’s not too late.

(Featured screenshot via YouTube. Thanks to @yazikus for the link)

May 14, 2020
Dave Daubenmire: Obama, the "Communist Muslim Freak," Must Go to Jail
Next Post 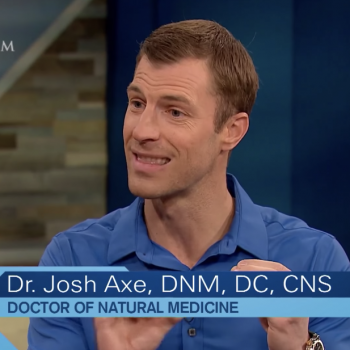 May 15, 2020 Influential Evangelicals Promoted the Lie That Essential Oils Can Cure COVID
Browse Our Archives
What Are Your Thoughts?leave a comment