Georgia Pastor Says a Rabbit’s Foot Won’t Help You, But God Totally Will May 10, 2020 Terry Firma

Georgia Pastor Says a Rabbit’s Foot Won’t Help You, But God Totally Will

Pastor Charles J. Harris of the Beattie Road Church of Christ in Albany, Georgia doesn’t like superstitions — except his own. He’s as incredulous as you and I at the thought that some people think that a rabbit’s foot will bring them luck. But carrying a little gold cross around your neck, or thumbing through a Bible, that will obviously lead to the greatest fortune of all — being bathed in the light of the Lord. 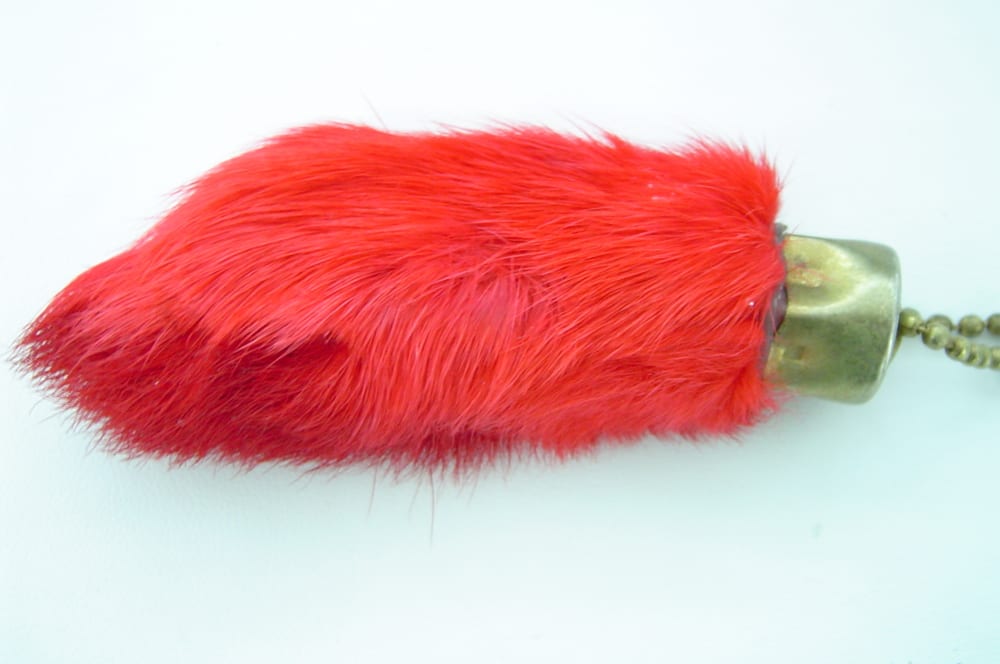 Harris writes in the Albany Herald:

An American tradition is that if you have a rabbit’s foot, good luck will come your way. I am not sure where this idea originated, but mankind has so often looked to find a magic potion or icon of some sort that will help them in times of trouble.

That got me thinking. I can easily imagine that with just a few different turns in history, Christianity would only be a marginal cult today, or not exist at all; and that a religion revering rabbits would be the predominant faith worldwide, its adherents stroking an amputated rabbit’s foot for the luck they hope to receive from their leporine Lord. 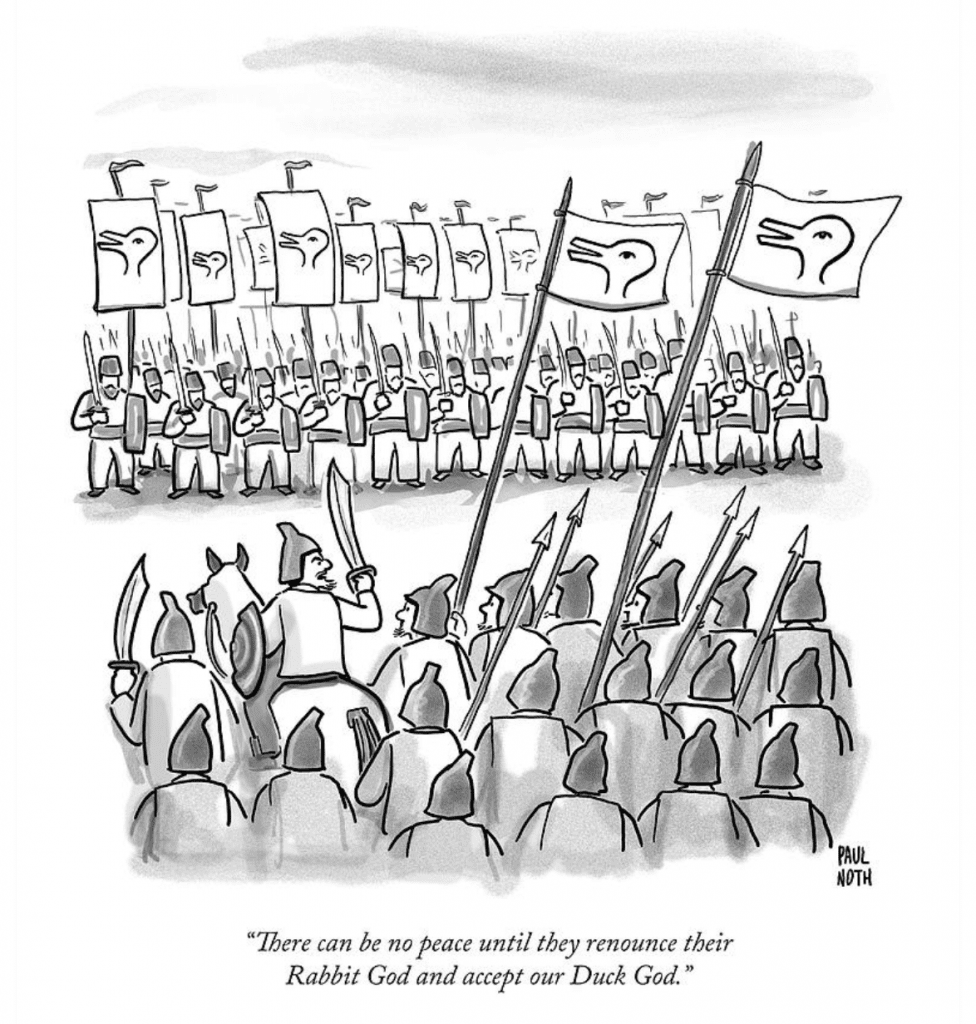 It seems to me that how religion forms and emerges is almost totally random. If we somehow started humanity over, science would eventually return to roughly the same body of knowledge we have today — but religions would be completely different. We might well have a tribe of a billion people who believe in the divinity of a Cosmic Saucer of Milk that magically created every living thing from curd; and a competing clan of two billion who worship a pantheon of half a dozen two-headed gnomes that live in the Earth’s core and demand daily blood sacrifices of bullfrogs, or virgins, or virgin bullfrogs.

You know what else wouldn’t change much, besides science? Atheism. Godless folk would still be head-desking and face-palming as they watch the Gnomists and the Saucerans battle and kill each other, the warring parties united only in their violent ill will towards heretics who decline to bend the knee to deities.

Anyway, back to Harris. Where’s he taking his rabbit-foot sermon?

The Jews thought they had the ultimate item to help them in the midst of trouble. When the Philistine army came against the Israelites, the Jews were losing the battle. What was their “rabbit’s foot?” It was the Ark of the Covenant designed by God and which contained those tablets on which God had written the Ten Commandments. They brought it into the camp of Israel, believing it would help them win. It didn’t work. “The ark of God was captured.” (1 Sam. 4:12) That ark had its purpose, but God never wanted it to be thought of as a good luck charm.

For that, the Almighty wants us to finger tiny jewelry sculptures of His son who’d just been tortured to death by crucifixion. It only makes sense!

The Philistines… finally decided [the ark] should be taken into the sacred house where their god, Dagon, was kept. The next morning, their idol was found lying face down “bowing” itself before the ark of God.

I read blowing the first time. I like my version better.

So they stood Dagon upright again. Early the next morning, … Dagon had fallen again and his head and both of his hands were separated from his body. The only thing that remained was the torso of Dagon. (1 Sam. 5:1-5) God then brought a plague of tumors on the Philistines.

Apparently we are we to believe that the Christian God is great because he punished the Philistines in an exceptionally cruel and hideous fashion — people, mind you, to whom He hadn’t even revealed himself!

Quick question: Did the Lord afflict the Philistines’ children with tumors too? Or was He kind enough to only torment their parents with cancerous growths, which presumably meant He slowly orphaned the young ones as they got to watch their moms and dads writhe and wither?

Ah. It’s right there in 1 Samuel 5:9: “[God] afflicted the people of the city, both young and old, with an outbreak of tumors.” Cool. Family-style suffering. That must’ve taught those kids, who had nothing to do with any ark, that the Abrahamic God was totally worth worshiping.

That describes the Catholic Church’s millions of plaster statues to a T. Should God also afflict the world’s 1.2 billion Catholics with tumors? Would that meet with Harris’s apparent approval too?

What does this have to do with us? … Paul showed that whatever we covet after becomes our idol. (Col. 3:5) It is tragic to see our nation thinking that a man’s life consists of how many material possessions he can get. (Check Luke 12:15) Houses, cars, luxurious clothing, electronics, traveling and vacations have become the gods of so many around us. These dominate our society so much we become like those who unknowingly are idolatrous. Have we not learned during recent events that these gods are unable to help us in the midst of the storm?

We happen to have a president whose career exemplifies rapacious coveting — a man who lived his entire life amassing opulent homes and gilded skyscrapers. When Trump moved to the White House, he had to get used to how spartan his new residence was relative to the splendor of his Mar-a-Lago quarters, and especially compared to the three floors of his hideously ostentatious Louis XIV-style penthouse in New York, gleaming with marble and 24-karat gold.

Do you suppose that Charles Harris has written even one newspaper column criticizing American evangelicals’ Orange Savior for his idolatry? Of course not.

Harris’s (and Trump’s) particular superstition doesn’t include a belief in the talismanic power of a severed rabbit’s foot. It does comprise, however, a number of odious doctrines and indefensible dogmas that we examine and deflate on this blog every day. Personally, I’ll bet that the average person with a rabbit’s-foot amulet does less harm than the average evangelical blowhard for Jesus.

Maybe someone really should start that rabbit-revering religion.

May 10, 2020
Evangelist Franklin Graham’s NYC COVID Tents Are Gone; So Is His Anti-LGBTQ Hate
Next Post 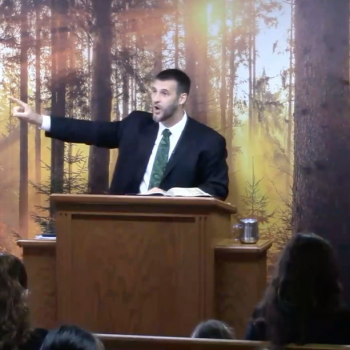 May 11, 2020 Baptist Hate-Preacher Spends Mother's Day Preaching That "Feminism is a Plague"
Browse Our Archives
What Are Your Thoughts?leave a comment