As social distancing measures to halt the spread of COVID-19 become ever more tiresome, the Catholic Church is here to help — with high-level clergymen wrapped up in drama worthy of reality TV.

It’s just too bad that they’re doing it by claiming that the risk of COVID-19 is a false narrative aimed at justifying previously unacceptable levels of government control so those in power can persecute Christians.

That’s the gist of an open letter circulating among Catholic conservatives, called “Appeal for the Church and the World.” Supporters are invited to add their signatures to the letter petition-style if they agree with its contents.

And what contents they are! The letter asks readers to accept that COVID-19 is a pretext for destroying fundamental rights and freedoms, questioning the seriousness of the pandemic that has claimed at least 274,000 lives within mere months:

The facts have shown that, under the pretext of the COVID-19 epidemic, the inalienable rights of citizens have in many cases been violated and their fundamental freedoms, including the exercise of freedom of worship, expression and movement, have been disproportionately and unjustifiably restricted. Public health must not, and cannot, become an alibi for infringing on the rights of millions of people around the world, let alone for depriving the civil authority of its duty to act wisely for the common good. This is particularly true as growing doubts emerge from several quarters about the actual contagiousness, danger and resistance of the virus. Many authoritative voices in the world of science and medicine confirm that the media’s alarmism about COVID-19 appears to be absolutely unjustified.

We have reason to believe, on the basis of official data on the incidence of the epidemic as related to the number of deaths, that there are powers interested in creating panic among the world’s population with the sole aim of permanently imposing unacceptable forms of restriction on freedoms, of controlling people and of tracking their movements. The imposition of these illiberal measures is a disturbing prelude to the realization of a world government beyond all control.

The letter goes on to call for governments to prioritize individual freedom, media to present all sides of the COVID controversy, and clergy to resist state orders requiring that places of worship remain closed (at least to large groups). It declares battle lines drawn — “either with Christ or against Christ” — and implores the Virgin Mary’s help to “crush the head of the ancient Serpent and defeat the plans of the children of darkness.”

Imagine sitting down to compose a call for a more measured response to COVID-19… and this is the final product.

Yet the document has garnered approval from conservatives across the spectrum of the Catholic faithful, from the most powerless lay person to a cardinal living heartbeats away from the papal throne.

That most powerful of signatories is Ghanian prelate Cardinal Robert Sarah. Or is it? Sarah now insists he never signed the document. Others involved, though, say that he gave the letter and its contents his full support — and they can prove it.

So who’s telling the truth here?

According to the National Catholic Register, the principal author of the letter is Archbishop Carlo Maria Viganó, a notorious conservative priest known for criticizing the Vatican’s policies on virtually everything, to the point of pronouncing Pope Francis a heretic. Viganó has not just claimed that Sarah signed and supported the document; he backed up his assertion with a time-stamped chronology of their communications on the subject.

Viganó quotes Sarah’s initial supportive response to the letter, which he transcribed from a recorded telephone call:

It seems to me a very serious matter. I think that this Appeal will do much good, because it will make us reflect and take a position: I agree that it should be published as soon as possible… I agree to put my name to it, because this is a fight that we must engage in together, not only for the Catholic Church but for all mankind.

It seems that Sarah had second thoughts, however, which he communicated to Viganó via text message on the evening of May 7:

Dearest Excellency, as I am still working in the Roman Curia, some friends of mine advised me not to sign your proposed Appeal. Perhaps it would be better to remove my name this time. I am very sorry. You know my friendship and my closeness to you. Thank you for your understanding.

The only problem was that, at the time Sarah sent the message, the text of the appeal and its list of signatories — including Cardinal Sarah — had been public for nearly three hours.

Viganó has since removed Sarah’s name from the list of signatories on the website. But he’s also expressed displeasure that Sarah claimed to have never signed the document at all rather than explain his decision to reverse course, painting Viganó as a liar in the process:

With surprise and deep regret, I then learned that His Eminence had used his twitter account, without giving me any notice, to make statements that cause serious harm to the truth and to my person.

I am very sorry that this matter, which is due to human weakness, and for which I bear no resentment towards the person who caused it, has distracted our attention from what must seriously concern us at this dramatic moment.

Whoever advised Sarah to withdraw his support for the document did him a favor.

While he’s publicly expressed some of the same concerns the letter raises, his argument is tame by comparison. Sure, he thinks Catholic liturgy ought to be considered an essential service and canceling Mass is overreach. But we’ve never seen him claim that COVID-19 has been blown out of proportion by governments who want to persecute Christians (and other freedom-lovers) as a prelude to a one-world government.

That particular message might seem like a bridge too far for Sarah. Then again, we’re talking about the same cardinal who opposed quarantine-safe “take-out Communion” on the grounds that the use of baggies disrespects the wafer. It’s not his reputation for being the sensible one has a long history.

(Image via Shutterstock. Thanks to Rick for the link) 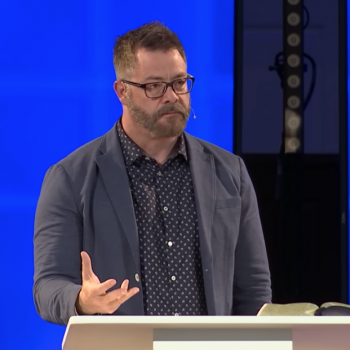 May 10, 2020
Pastor Who Often Asked Atheists "How's That Working Out For You?" Dies of Suicide
Next Post