In theory, this isn’t weird. Rural areas like Sierra County don’t always have the law enforcement officials they need, so volunteers can be given that kind of authority. But that’s not why this is happening.

It turns out that law enforcement officials are exempt from the lockdown orders issued by Democratic Gov. Michelle Lujan Grisham… so if you deputize members of a church, they could gather in person even if the order says churches, like other non-essential businesses, aren’t allowed to do that.

This isn’t just a government official promoting Christianity by speaking at a church in full gear; it’s a sheriff rewarding Christians with the opportunity to put their communities in the direct path of the virus. It’s going to get people killed.

In the middle of the Sunday service, the sheriff deputized any churchgoer who was willing to sign up.

“I guess one of the benefits of what we just did here is that under the governor’s order law enforcement is exempted from her order — believe me folks that is not my intent here today,” he said.

Riiiight. Not his intent. He’s just willing to grant unearned authority to literally anyone who happens to be in the very Christian church he’s speaking in. No background check needed. And if deputizing them makes them exempt from the governor’s orders, well, hahahahaha, what a coincidence!

There haven’t really been COVID cases in the county — just one positive test so far — mostly because it’s rural area, but the whole reason for maintaining social distance is to prevent the virus from spreading.

Not that Hamilton cares. He offered this additional pick-me-up to everyone in the congregation:

“I’m not in any way shape or form attempting to minimize the impact that that’s had on our state on their friends and on their families, but the reality, folks, is that we’re all going to die,” the sheriff said.

We’re all going to die faster because Christian supremacists like Hamilton would rather put everyone in danger than keep them sheltered for a little while longer. I seem to care about the people in that church more than he does.

Hamilton later said deputizing all those people had to do with putting down riots and other acts of civil disobedience… even though those kinds of things don’t happen in the area. Which is to say he only did it to work around a Democratic governor whose goal is to save lives. 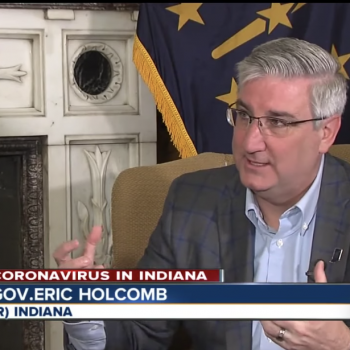 May 7, 2020 Indiana Churchgoers Will Mass-Gather Again; Governor Calls Them "Control Group"
Browse Our Archives
What Are Your Thoughts?leave a comment