On Monday, Republican State Rep. Nino Vitale of Ohio was deservedly mocked for saying he wouldn’t wear a face mask because God created us in His image and a mask would (somehow) cover that up.

No word yet on why Vitale wears clothes at all…

In any case, preacher Andrew Wommack is now following suit.

He said on his Truth & Liberty Coalition show that he also couldn’t bring himself to wear a mask because that’s not what Jesus would do.

Andrew Wommack doesn’t think he should have a wear a mask because he can’t picture Jesus wearing one. pic.twitter.com/hVb2iz18c2

I don’t know that they have a Constitutional right to require you to wear a face mask and stuff like this. I can see the practicality of it…

Well, you know, we’re supposed to see ourself in Christ… and I just can’t even picture Jesus wearing a mask as He goes around and praying for people. It just doesn’t compute for me.

Yeah, well, I can’t imagine Jesus wearing glasses, skinny jeans, or expensive sneakers either, and yet churches are full of pastors who do all three.

It’s amazing how the same people who always urge us to act like Jesus never seem to follow him when it comes to helping the poor or being kind to their neighbors. Yet if there’s a disease that Democratic leaders are responsibly trying to limit, suddenly we have to act like medicine hasn’t evolved in thousands of years.

If the virus doesn’t kill us, then faith-based ignorance may do the trick.

May 5, 2020
Televangelist: God Dared Me to Trust Him More, Then He Gave Me a New Private Jet
Next Post 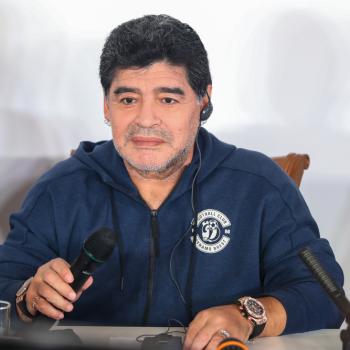 May 5, 2020 Cheating Soccer Has-Been Diego Maradona Hopes "Hand of God" Will Erase COVID-19
Browse Our Archives
What Are Your Thoughts?leave a comment