6 Takeaways from the Largest-Ever Study of Atheists in America May 5, 2020 Hemant Mehta

6 Takeaways from the Largest-Ever Study of Atheists in America

Whenever major polling groups survey Americans about religion, atheists are usually lumped in with agnostics and people who believe in something even if they aren’t part of any organized religion — the “Nones.” It’s hard to know what atheists in America believe simply because it’s hard to find a representative sample — and a polling group willing to look at us specifically.

It’s also cost-prohibitive. It may be useful to know how different religious groups voted, for example, but not necessarily how atheists differed from agnostics since we mostly vote the same way.

American Atheists has taken a big leap in fixing that with the release of Reality Check: Being Nonreligious in America. 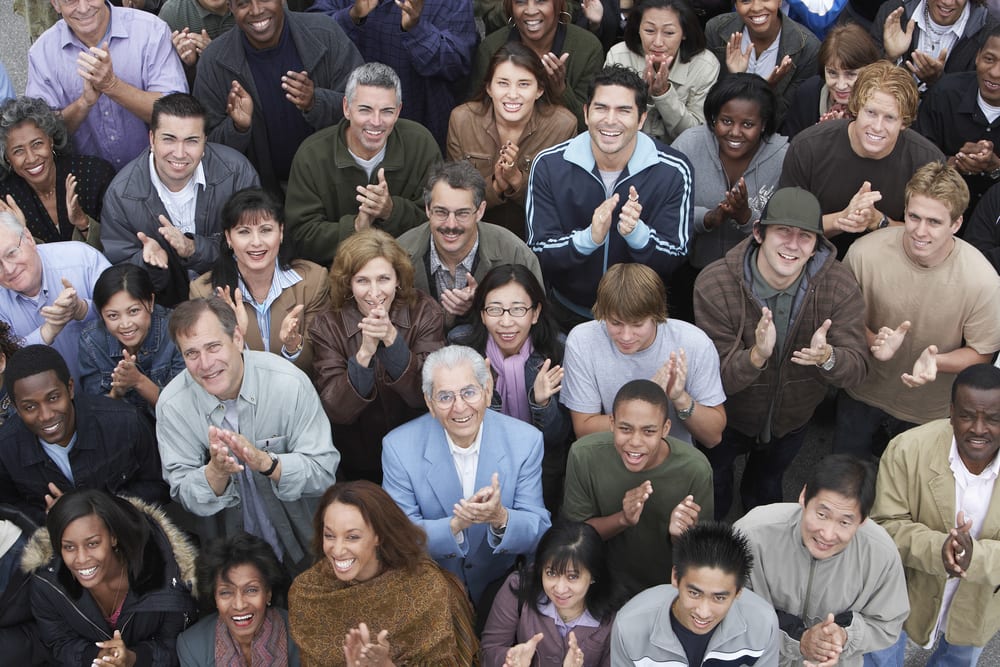 They used information obtained through the (online) U.S. Secular Survey to find out what roughly 34,000 non-religious participants thought about a variety of topics. 34,000. They say it’s “the largest ever data collection project on secular Americans and their experiences.”

To be clear, this isn’t a survey about all atheists in America. You’d need a lot of money to pull that off. This is a self-selected group of people, the kind who are willing to take this sort of survey online. But it was heavily promoted, in a variety of ways, to gather as many participants as possible, and there’s still a lot of useful information we can glean from that.

So what did we learn? Here are just 6 takeaways: 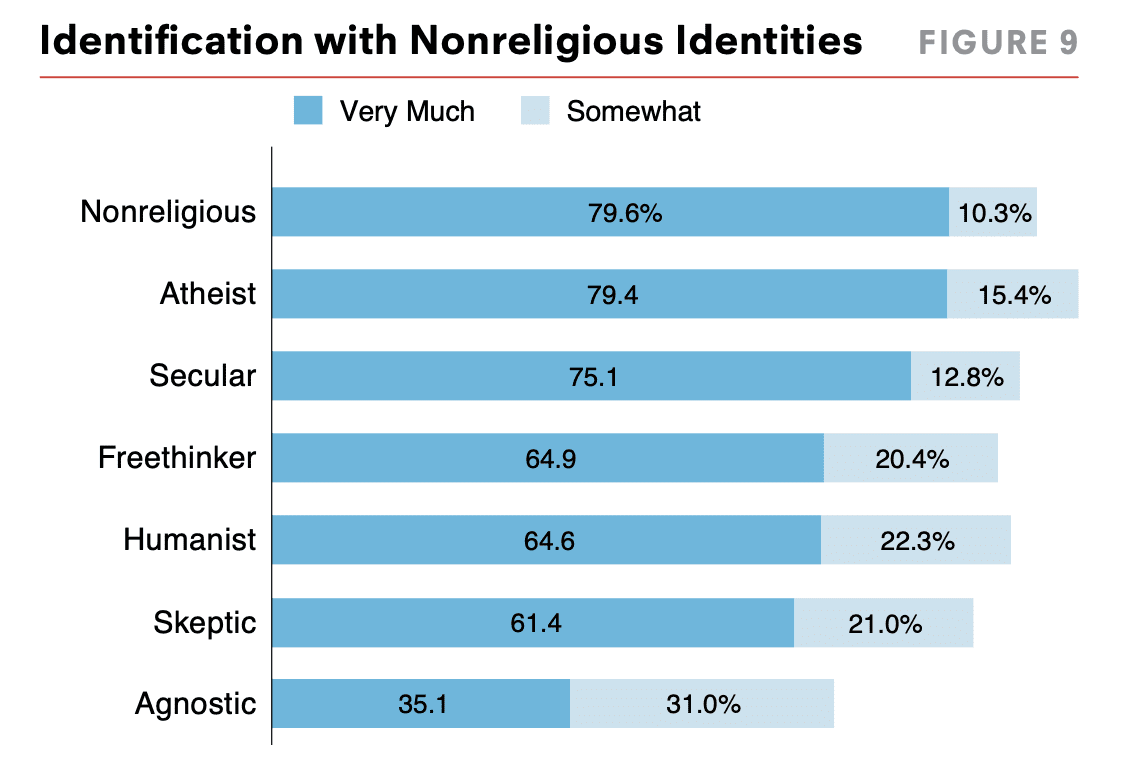 I suspect most of us use a variety of these labels depending on who we’re talking to. Everything but “agnostic” would apply to me personally. 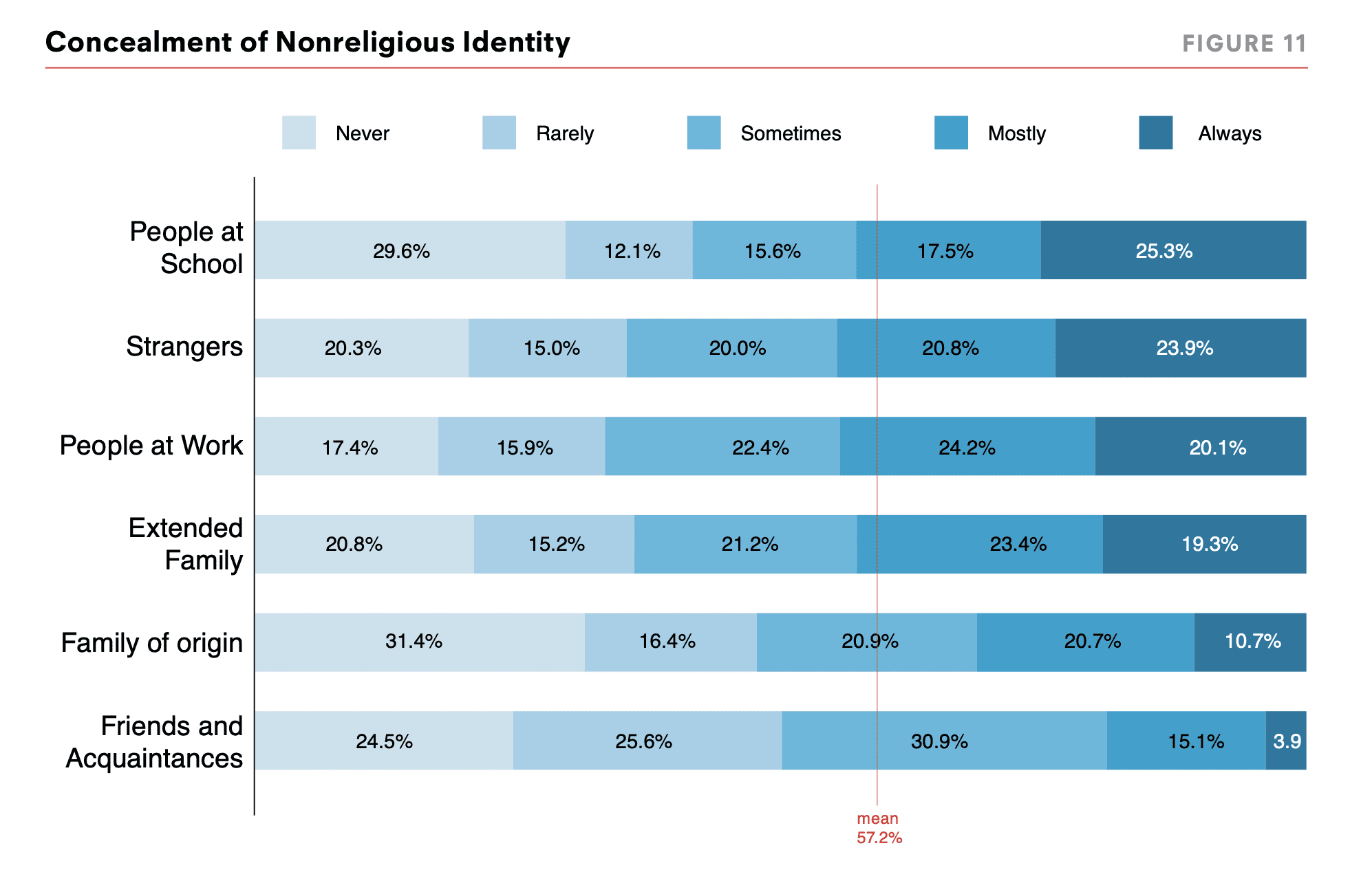 I’m surprised by how many more people hide their atheism at work than from their families. I would have thought it’s safer to tell your work colleagues you’re not religious than your religious parents, but outing yourself at work may pose greater threats to your livelihood. 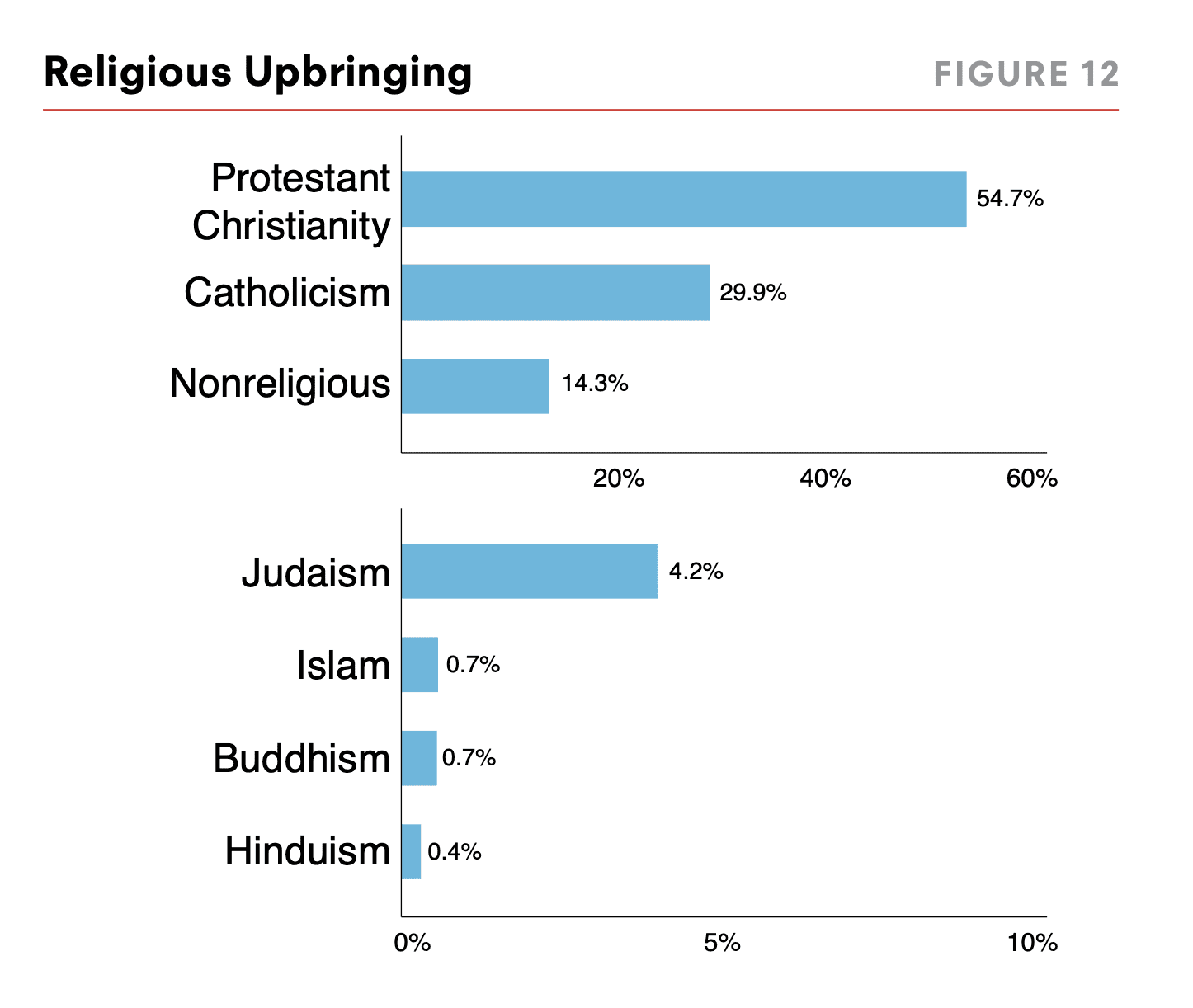 More than 40% of participants said their homes were “somewhat firm” or “very firm” about religious expectations. In other words, they took religion seriously in their families… and yet it didn’t keep them in the fold. It’s also going to be fascinating to see what happens when we have more kids raised in non-religious homes. While only 14.3% of participants grew up with non-religious parents, I suspect that number will skyrocket over the next generation. 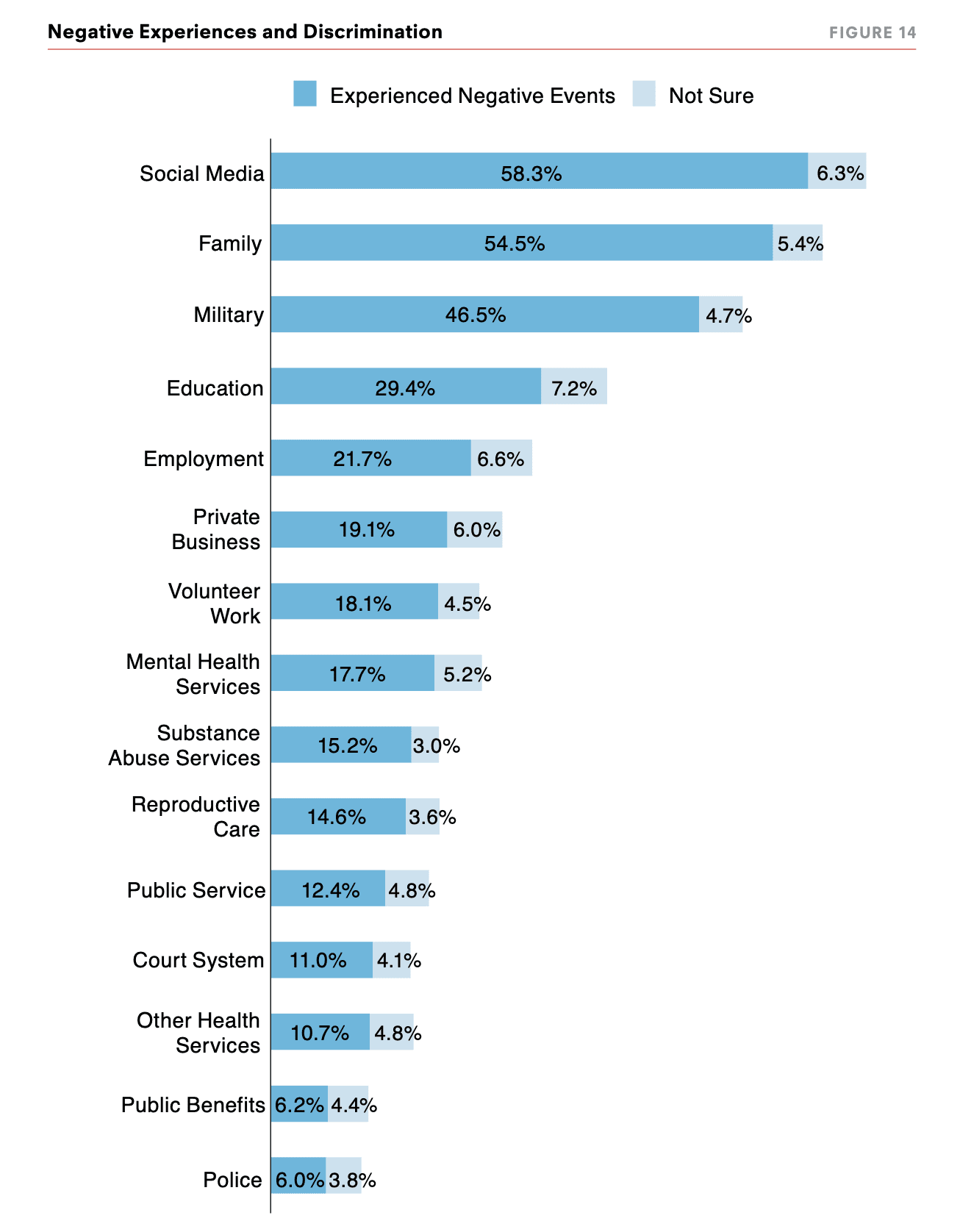 The most common areas where participants reported having negative experiences due to their nonreligious identity were using social media or commenting online (58.3%) and with their families (54.5%).

Participants were also asked if they had been threatened, experienced property damage, or been hit, punched, kicked, or assaulted in the past 3 years because of their secular identities. While the vast majority (86.7%) of survey participants did not experience any of these events, 12.2% of survey participants reported being personally threatened, 2.5% had their personal property damaged, and 0.9% have been hit, punched, kicked, or physically assaulted because of their nonreligious identity. 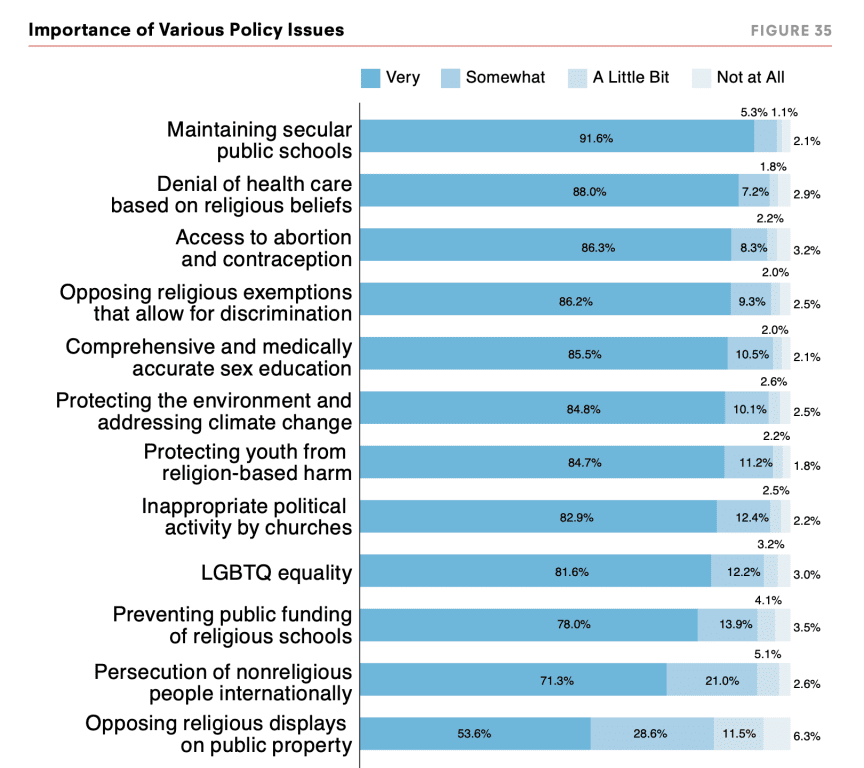 Most participants want secular schools, access to birth control, and no special treatment for religious groups. But fighting a Ten Commandments monument on public property? Not a major priority.

In order to understand the policy priorities of nonreligious people, we asked survey participants how important a number of policy issues were to them personally. Issues were selected from among those discussed as important to nonreligious people during focus groups. While survey participants expressed strong interest in all these policy issues, overwhelming concern was expressed for maintaining secular public schools (91.6%) and about the denial of health care based on religious beliefs (88.0%).

This doesn’t surprise me. There are a lot of groups that will fight for abortion rights and keeping schools secular. Those are not “atheist issues,” per se. The sort of things atheist groups tend to fight are, by definition, going to be niche causes, even if they have legal importance. 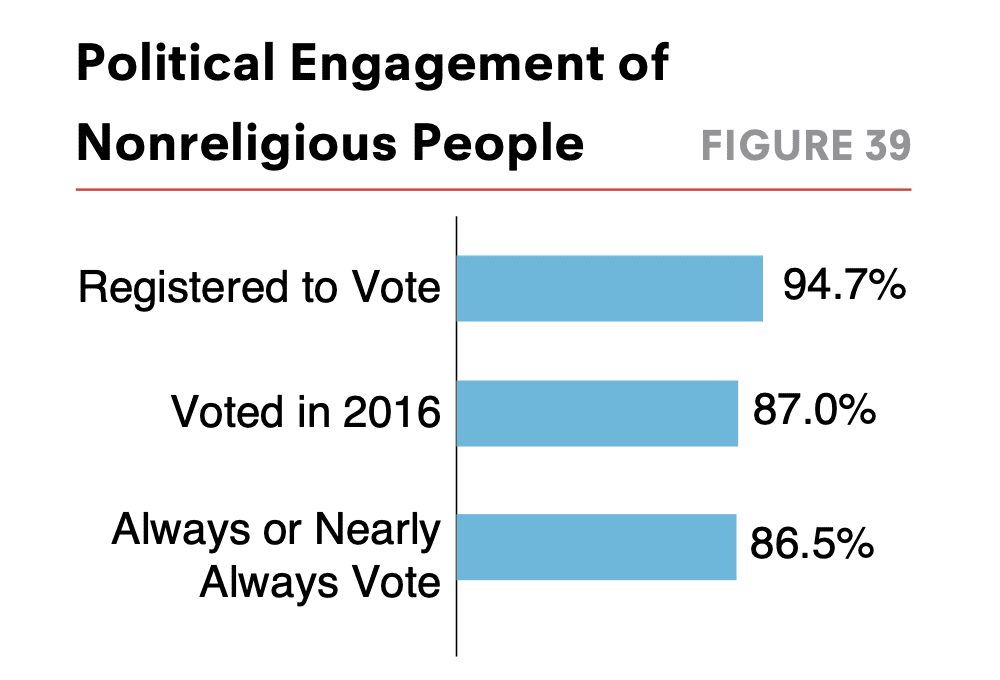 Although not directly comparable, these rates are much higher than the voting rate in 2016 (55.7%) for members of the general voting age population (FEC, 2017).

At some point, Democrats need to recognize we’re a valuable voting bloc and stop avoiding us. It’s to their advantage to engage with us and support our (fairly mild, totally sensible) policy issues.

In a statement, Nick Fish, president of American Atheists, said, “Now that we know the power of organized secularism, it’s up to secular organizations to advocate for change and provide as many nonreligious Americans as possible with the support and community they need.” That’s a fair point. This survey isn’t about what certain groups ought to be doing. It’s about who they all represent. If just about everyone is dealing with anti-atheist discrimination, for example, then calling it out and working to change it would be a valuable endeavor for any secular group.

There’s so much to sift through in this 60-page report, so check it out for yourself. We’ve never seen anything like this. 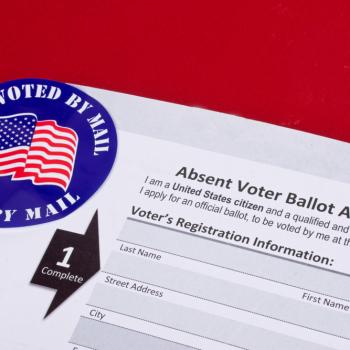 May 5, 2020
Missouri's Jewish Leaders to GOP: Our Faith Requires Absentee Voting in Pandemic
Next Post