Jim Bakker to Court: Selling a Fake COVID Cure is Part of My “Religious Freedom” May 4, 2020 Hemant Mehta

Jim Bakker to Court: Selling a Fake COVID Cure is Part of My “Religious Freedom”

Televangelist Jim Bakker and his legal team are claiming that his show’s hawking of a false COVID-19 cure is merely an example of him exercising his religious freedom. Therefore any attempt to stop him is a form of Christian persecution.

Back in March, Bakker was called out by the state of New York, as well as the U.S. Food and Drug Administration and the Federal Trade Commission, for selling a “Silver Solution” that his show falsely claimed cured coronavirus.

That wasn’t his show’s only claim. Bakker said the product could get rid of “all venereal diseases” and prevent SARS and HIV. He also said the silver is “almost like a miracle” and that “God created it in Heaven.”

But the coronavirus claim was especially egregious. Certainly hawking a cure would be a horrible idea now, but it was a bad idea then as well.

The Silver Solution soon came down from his website and Bakker tried to distance himself from the controversy by saying he had never personally suggested it would cure COVID-19. (It wasn’t him, of course. It was his guest, “naturopathic doctor” Sherill Sellman. But Bakker never pushed back on her claims.)

The legal problems didn’t go away. Missouri’s Attorney General Eric Schmitt also sued Bakker’s ministry in March for lying about the effectiveness of “Silver Solution” as a “treatment for 2019 novel coronavirus (COVID-19).”

Bakker and his legal team are now asking the courts to dismiss that Missouri lawsuit.

In filings made public today, instead of explaining why they promoted a false coronavirus “cure,” Bakker and his lawyer, former Missouri Governor and Attorney General Jay Nixon, argue that Schmitt is going after Bakker’s “religious freedoms.”

This is from their press release:

“Jim Bakker is being unfairly targeted by those who want to crush his ministry and force his Christian television program off the air,” said Jay Nixon, Bakker’s attorney and former Governor and Attorney General of Missouri. “The video recording of The Jim Bakker Show clearly shows the allegations are false. Bakker did not claim or state that Silver Solution was a cure for COVID-19. This case is about religious freedom.”

Nixon described the complaint against Bakker and his ministry as “unprecedented” and disappointing.

“Similar silver products are commonly sold health supplements, available at Walmart, Amazon, CVS, and GNC,” Nixon said. “Targeting a Christian pastor, who has been using and offering the product for the past 10 years, is not supported by the facts or the law.”

It’s true that silver products are sold elsewhere. But no one else is suggesting it as a cure for a virus that currently has no cure. That would be false advertising.

The official response to the lawsuit is even more bonkers. It claims suing Bakker for selling a product (even though he was making a false claim!) is actually a violation of church/state separation because Bakker was simply practicing his faith.

The Attorney General’s claims are barred by the First Amendment to the United States Constitution, including the Establishment, Free Exercise, Free Speech, and Free Press Clauses, as made applicable to the State of Missouri by the Fourteenth Amendment, and by the corollary rights found in Article I, Sections 5 and 8, of the Missouri Constitution, because application of the MMPA [Missouri Merchandising Practices Act] to Pastor Bakker and Morningside (a) requires excessive entanglement with religion, including the secular resolution of purely religious questions, thereby exceeding restraints on government authority and invading the sphere reserved exclusively for religion, (b) constitutes impermissible regulation of their religious speech and religiously-motivated expressive conduct (e.g., preaching, solicitation, and/or advertising), and (c) purports to impose civil liability for false or misleading speech (and for speech which has the capacity or tendency for being, but is not, in fact, false or misleading) without requiring a showing of actual malice.

Apparently, unless Bakker knowingly sells a product that could hurt people, he should be allowed to get away with it. Though a man that ignorant can always play dumb. It’s not an excuse for irresponsibility.

That response also includes a declaration from Maricela Woodall, the president of Bakker’s ministry Morningside Church Productions. Here’s the kicker, in which she says selling Silver Solution is just an act of Christianity.

Our sincerely-held religious beliefs require us to encourage our partners to prepare spiritually, mentally, and physically for the second-corning of Christ, and assist them in doing so by bringing experts to our broadcasts to teach how to accomplish this goal. An integral part of this expressive ministry and practice, as well as the doctrinal teachings of our religion, includes educating our partners concerning, and offer them, products, including Silver Solution, that we believe have been made available to this generation by God. We believe in providing practical tools and supplies to prepare for the end-times, in connection with the solicitation of funds for the ministry.

Each of the products offered on The Jim Bakker Show, including Silver Solution, are products that Pastor Bakker and Morningside feel divinely inspired to offer to the world.

Each product! Even the giant buckets of apocalyptic food!

By the logic of Bakker’s legal team, he could sell anything he wants, promote it as a cure for literally any disease, then shield himself from responsibility by saying he was just living out his faith. People could die, or they could delude themselves into thinking they’re cured when they’re not, and Bakker doesn’t believe he should be held accountable for any of it.

Honestly, is there any crime Bakker couldn’t get away with by saying he was just following God’s Word? That’s what he seems to be reaching for here. Total immunity using religion as an excuse.

No court should let him get away with it. 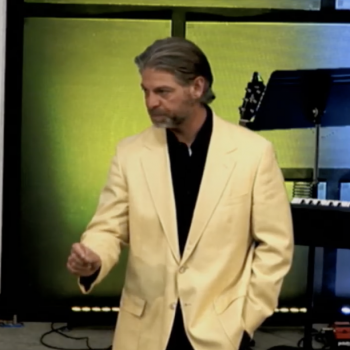 May 4, 2020
Judge to Pastor: Even the Bible Says You Don't Need a Crowded Church for Worship
Next Post