Why was a high-ranking U.S. Army chaplain preaching to a group of National Guard members who never asked for it? It’s an example of how Christian proselytization in the military is commonplace despite how illegal it is.

Here’s the backstory: Nebraska is one of the few states where there have been no stay-at-home orders. Republican Gov. Pete Ricketts has refused to take that step, and Nebraska has, not surprisingly, seen more than 5,000 positive cases of the virus. Nearly 700 of those cases have come from a Tyson Fresh Meats’ beef plant in Dakota City. (It’s the largest employer in the area, with over 4,300 workers.)

We only know about that high number of positives because, last week, the Nebraska National Guard was enlisted to help the state’s Department of Health and Human Services conduct testing of Tyson’s employees at that site.

Here’s where it takes a bizarre turn.

A few days ago, a member of the Nebraska National Guard told me about an incident that happened after the first day of testing. Members of the Guard were debriefing at a rest area at the Tyson plant afterwards when Colonel Philip G. Houser, the Nebraska National Guard Chaplain, arrived on the scene. He promised he wouldn’t “preach a sermon”… but then proceeded to do just that.

The member in question even got it on video. You can see everyone participating whether they wanted to or not.

Keep in mind that Houser isn’t merely a chaplain. He’s a colonel. He’s high ranking. No lower ranking soldier could reasonably be expected to call him out on it — certainly not in real time.

… You all are on the front lines. You know that, I’m sure. You see and hear it on a daily basis, and it really makes a difference in the lives of all kinds of people. I’d like to — quickly, if I could — just offer up this word of Scripture from the Psalms and then say a prayer. And by the way, also, I should also add: I will be here if anybody wants to visit with me. You are welcome to do so.

So from Psalm 77, this is written in a time of catastrophe for the author, King David.

Great travail came upon him and his people, so he writes, “I cry aloud to God; aloud to God and He will hear me. In the day of my trouble I seek the Lord; in the night my hand is stretched out without wearying; my soul refuses to be comforted… Will the Lord spurn forever, and never again be favorable? Has His steadfast love forever ceased? Are His promises at an end for all time? Has God forgotten to be gracious? Has He in anger shut up His compassion? Then I said, ‘I will appeal to this, to the years of the right hand of the Most High.’ I will remember the deeds of the Lord; yes, I will remember Your wonders of old. I will ponder all Your work, and meditate on Your mighty deeds. Your way, O God, is holy. What god is great like our God? You are the God who works wonders; You have made known Your might among the peoples. You with Your arm redeemed Your people, the children of Jacob and Joseph.”

I promised I wouldn’t preach a sermon, and I will not do so, but I do want to say that David refers to the hand of the Lord intervening on his people — his and his people’s — behalf. The fact of the matter is: You all are agents of that divine mercy. You all are the one who are doing… the dirty work on the line. The temperature taking and all the rest of it. That makes a difference. That’s how God preserves our nation and our people, so thanks again for that.

Let us pray: Almighty God, heavenly Father, give us grace to trust You during this time of illness and distress. In mercy, put an end to the COVID-19 epidemic that afflicts us. Grant relief to those who suffer, and comfort all who mourn. Sustain all medical personnel in their labors, and cause Your people ever to serve You in righteousness and holiness; Be with these soldiers and airmen as they serve on the front lines. As they do their duty, protect them. Be with them. Strengthen them and uphold them. Station your Holy Angels around them, that a hedge of protection be always theirs.

Lord God of hosts, stretch forth Your almighty arm to strengthen and protect all who serve in the armed forces of our nation. Support them in times of war and in times of peace. Keep them from all evil and epidemic. Give them courage and loyalty. Grant that, in all things, they may serve with integrity and honor through Jesus Christ our Lord.

Well, thanks again for the opportunity to be here with you. And as I said, anyone who wants to do so is free to speak with me, formally or informally. It doesn’t have to be formal… Don’t be afraid to talk to me informally… Anyway, thanks very much. I’m not going to take any more of your time.

May the Lord be with you.

All of that might be fine in a private setting or a church service. It’s absolutely uncalled for in a secular setting where soldiers may represent different faiths or no faith. Imagine if Houser did what he did as a Muslim or atheist. But because he’s a Christian, with all the privilege that comes with it, he delivered a sermon assuming everyone would automatically appreciate it.

That’s not the case. In fact, the National Guard member who took that video isn’t just an atheist; he’s an atheist running for a seat in the state legislature.

Joseph Couch has been part of the state’s National Guard since 2013, when he turned 19. (He’s 26 now.) As someone who’s been a public servant his entire adult life, it’s no wonder he’s also now running in a primary for the Nebraska State Legislature from District 21. That election is on May 12. (The Freethought Equality Fund PAC has endorsed him in the race.) 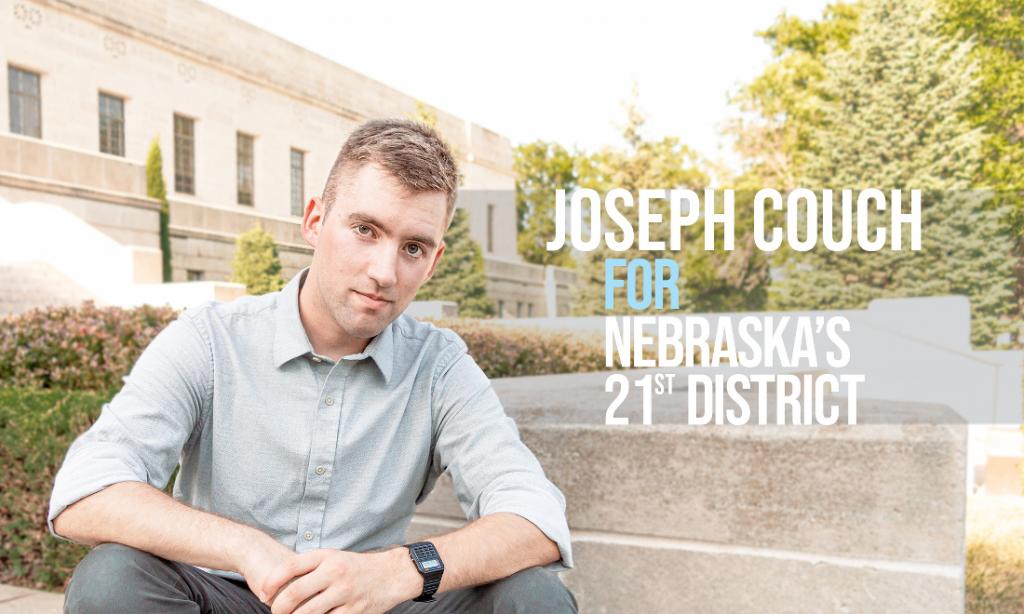 When Couch was called to serve with the National Guard, he stopped campaigning and went to work. But he recognized the problem with the prayer. He made it clear to me that the chaplain meant well, but that doesn’t make his remarks appropriate. It’s not a chaplain’s job to promote Christianity to a captive group of public servants. (It’s another reason we need more Humanist chaplains in the military, but that’s a separate story.)

I asked him if he worried that sharing this story might affect his campaign. It’s hard to imagine an atheist calling out a Christian chaplain would endear him to voters. But his concerns were simply defending the Constitution and promoting church/state separation. He wouldn’t have said anything if this was a Christian service, but it wasn’t. It was a gathering of all National Guard members after a particularly grueling day.

For what it’s worth, after I shared details about this story with the Freedom From Religion Foundation, they informed me they would be taking action. If nothing else, they’ll send a letter to the appropriate officials letting them know why Houser’s conduct was unacceptable. 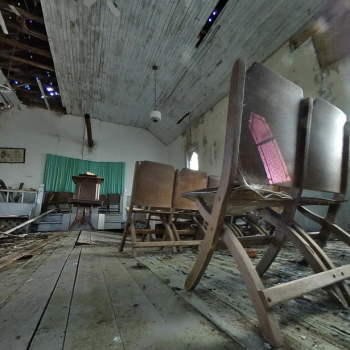 May 4, 2020
These Photos of a Collapsing Church Are a Reminder of Loss... and Secularization
Next Post