Christian apologist Alex McFarland, who has no idea why Millennials are abandoning faith and claimed in 2018 that the entire Democratic Party was committing treason, now says progressives hate the Constitution because they are working for Satan.

“The hate for the Constitution is a spiritual issue,” McFarland said. “Satan hates America. Why? Because over the last 242 years, the greatest engine for not only creating personal freedom and prosperity, empowering people, the creation of wealth, but the greatest contributor to world missions — the Great Commission — has been the United States of America.”

It’s amazing how someone who defends a president who demonizes journalists for asking critical questions (so much for freedom of the press) and routinely promotes conservative Christianity (so much for no establishment of religion) is condemning progressives for ignoring the Constitution. That’s not even getting into his other violations of the Constitution.

Progressives aren’t enemies of the Constitution. They want a government that lives up its ideals instead of trying to shred it for their own political interests. Not that McFarland cares. It’s easier for him to call his enemies agents of Satan than addressing their concerns honestly. That’s what his faith teaches him to do.

April 25, 2020
Saudi Arabia Bans "Flogging" as a Punishment (but Executions Are Still Allowed)
Next Post 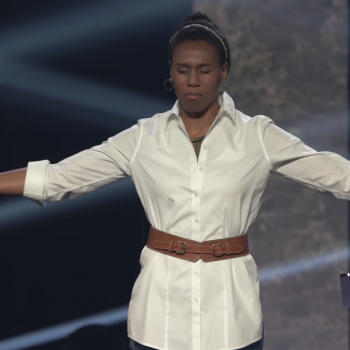 April 25, 2020 Christian Speaker: Satan is Using COVID-19 to "Discourage God’s People"
Browse Our Archives
What Are Your Thoughts?leave a comment