Franklin Graham: 30 People Died in a Tornado, But God Saved This Pound Cake

Whenever there’s a tornado or other natural disaster that flattens an entire city, there are always Christians who point to a non-destroyed Bible found in the rubble as proof of… something. They’re desperate for hope, so they say the Bible is a sign of God’s love, ignoring the fact that they also believe the same God just killed a bunch of people.

During this pandemic, times are even more desperate.

Maybe that’s why evangelist Franklin Graham, taking a break from his No-Jews-Allowed-To-Work-Here hospital in Central Park, is bragging about a pound cake that survived a deadly tornado in Mississippi.

When Jerel Wade turned on the weather on Easter Sunday morning he saw that a deadly twister — one of many that struck across the South — was headed straight to his parents’ Soso, Miss. home. He texted them and they immediately took cover in their bathroom. When Robert and Judy Wade emerged, they stepped out into wholesale destruction. A massive tree lay against the house, the roof had collapsed into the kitchen, and the refrigerator had vanished. Amazingly, the pound cake Judy Wade had baked earlier that morning was still sitting perfectly intact on the kitchen counter under a glass cover. Jerel said, “‘I’ve seen His hand of mercy, I hear his voice of cheer. And, just the time I need Him, He’s always near.’ This Easter hymn has come to life. My parents were home during this storm. Their house was completely destroyed. But, their lives and Mama’s pound cake were spared.”

At least 30 people died. This family’s home was destroyed. But there’s cake. So… thank you, Jesus?

I know we say this a lot, but you don’t have to celebrate the idea of a serial killer leaving His calling card on your table. I’m sure, given the choice, anyone would gladly give up the cake in exchange for less destruction.

This isn’t about the family, though. If they want to cling to something for hope, so be it. They’ve suffered enough. But Graham promoting this story like it’s good news? Christ, he needs help.

He added in his post that a manager of his Samaritan’s Purse group “met the Wade family yesterday and was able to rejoice with them.” So they prayed? They ate cake? They praised God for killing 30 other people but not them? The arrogance here is astonishing. 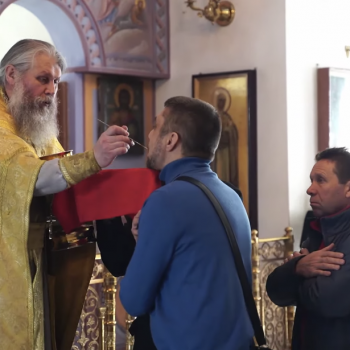