Pastor Tony Spell of Louisiana’s Life Tabernacle Church has paid his bail and left jail after being arrested on charges of aggravated assault for backing up a truck in the direction of a protester.

As he stepped out of jail, there was a crowd of Christians celebrating his release, and Spell milked the whole experience, casting himself as a martyr fighting on behalf of his faith… even though he’s leading a death cult and eager to put more of his followers in harm’s way.

We hold these truths to be self-evident, that all men are created equal and are endowed by the Creator with certain unalienable rights. My rights to have church and to preach the gospel of Jesus Christ are endowed to me by my Creator. Not my district attorney. Not my chief of police. And not my Governor John Bel Edwards. Not my president. And not my Department of Justice.

I was arrested by the Central Police Department this morning. I was led into a trap. A half a dozen officers handcuffed me, put me in the back of the car, and booked me into East Baton Rouge Parish Prison.

While I was in the prison, I preached to the inmates. [Cheers] When the guards used profanity I said, “Every time you use profanity, I’m going to quote a scripture.” It went quiet in that jail cell. And then I preached to people.

The only thing I’m guilty of is practicing my faith, which was given to me by Jesus Christ Himself. Thank God for my church who is here today, who stands with me.

Just to point out the obvious, no one was ever taking away his right to preach Christianity. He can always live-stream his services. The problem is that he wants to kill people in the process. That, and I cannot stress this enough, is bad.

There’s also no evidence of any “trap.” There was a warrant out for his arrest and police literally spoke to him about how it would go down:

Central Police Chief Roger Corcoran said Spell initially requested for officers to meet him at his church, but Corcoran declined, saying he wanted to avoid media showboating. Spell was told to turn himself in at the police station. The building is closed, so the arrest was made in the parking lot.

That’s not a trap. That’s coordination.

Remember: One member of Spell’s church has already died, and Spell’s own lawyer (who attended the church) is now sick with COVID-19. The only question is how many more gullible people will allow Tony Spell’s inflated Christian ego to hurt them, too. 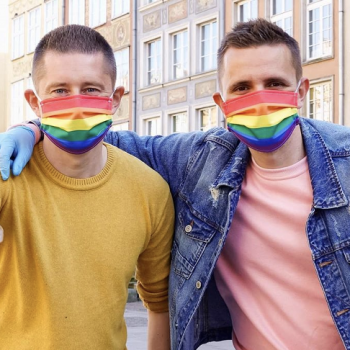