A day after roughly 130 people attended Louisiana’s Life Tabernacle Church, Pastor Tony Spell has a new set of criminal charges against him. Somehow, it’s not related to the church member who died of COVID-19, or Spell’s lawyer who’s currently sick with the virus.

Spell was already issued a misdemeanor summons last month on six counts of violating the governor’s executive order banning large gatherings. While he wasn’t arrested, it’s still serious, and Spell will face those charges in court. Now he’ll have additional charges to defend against.

This particular incident is a charge of “aggravated assault with a deadly weapon” that has to do with how Spell dealt with a protester on Sunday.

Look at the video below and you can see a church bus backing up — purposely, it seems — in the direction of a protester:

#BREAKING Central Pastor Tony Spell has a warrant out for his arrest for an incident with a protestor that happened on Sunday. Watch below. ⬇️ ⬇️⬇️ @BRProudNews pic.twitter.com/mEaSJkPpt5

Police in Central say Spell allegedly backed up a church bus into the direction of a person protesting in front of Spell’s church Sunday. Video of the alleged incident shows the bus coming to a stop just short of where the protestor was standing.

An aggravated assault charge would apply even if the protester wasn’t physically injured.

It would be something if Spell was arrested for basically threatening the life of a protester, even though, as video from his Sunday service shows, he was already putting many more lives at risk inside the church. Either way, it’s about damn time he was held accountable for his actions. 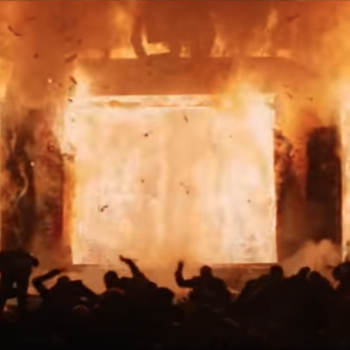 April 20, 2020
We Should Retire the "Fire in a Crowded Theater" Line Already. Here's Why.
Next Post

April 21, 2020 AT&T: DirecTV Channels May Want to Drop Jim Bakker's Show After COVID-Cure Scam
Browse Our Archives
What Are Your Thoughts?leave a comment