This Man Has Seven Reasons For Rejecting Atheism, and None of Them Make Sense April 18, 2020 Terry Firma

This Man Has Seven Reasons For Rejecting Atheism, and None of Them Make Sense

By and large, atheists know a lot about religion. (In a quiz about world faiths, they answered more questions correctly than any religious group.) Wouldn’t it be nice if Christians and others returned the favor? You know, learned a little bit about what atheists think and why we think it, rather than make assumptions and cast aspersions?

… has been a disciple of Jesus Christ more than 65 years, been preaching the gospel more than 55 years, and has been writing and cartooning for Christian publications more than 45 years.

He fancies himself quite openminded: Back in college, he says, he “considered” atheism. Not all that seriously, mind,

… but I read some of the stuff, talked to a few of the people, thought about the ramifications of it all, and made my choice to take my stand with believers.

Read some stuff. Gabbed with some folks. There’s a certain nonchalance about McKeever’s supposed foray into freethought. If he’s willing, maybe we can belatedly clarify some “stuff” here and now. 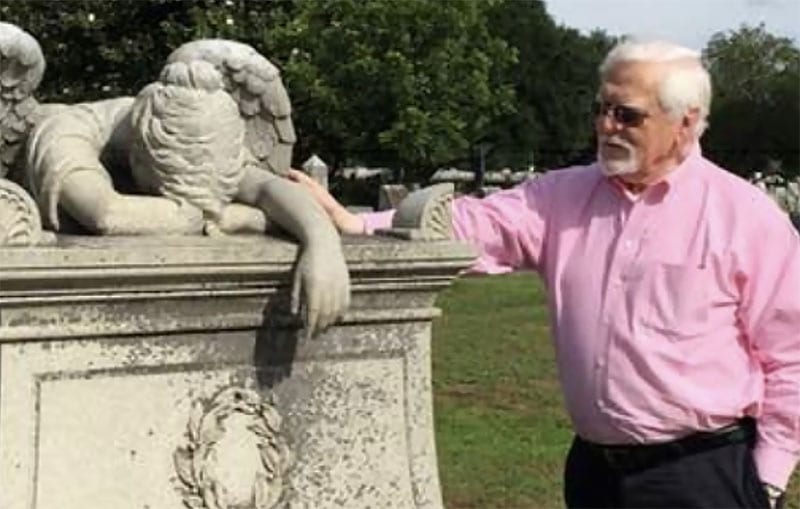 As a rule, atheists tend to be a pretty miserable lot.

Aaaand we’re off. I’m rarely miserable, and I know few atheists who fit that description. As a group, we’re neither Eeyores nor Pollyannas. We do point and snicker a lot, and sometimes we’re openly profane. The people on the receiving end of our teasing and lambasting can easily misconstrue that as meanness or rage. I guess we’ll just have to forgive them!

Now, it’s true that a lot of us get angry occasionally. I’ll cop to that myself. But so what? Isn’t it entirely appropriate to get furious about the endemic child rape within Islam? About pederast priests and prelates and others who engage en masse in the same stunning criminality? About prayerful faith healers who let sick children die rather than take them to a doctor?

Maybe the real question isn’t why atheists sometimes fume, but why more people of faith don’t. I view our righteous anger as an affirmation of our humanity, our groundedness, our normality. Especially for the sake of those too young to defend themselves, I’d much rather see less forced positivity from the religious, and more honest self-examination, metaphorical house-cleaning, and accountability.

[T]he best Christians I know are also the most put-together, positive, and effective people in the room.

Is this Christian “put-together” and “positive”? What about this fine specimen? Or this one?

And are religious people “effective”? I suppose so, but in what exactly? Protecting their country from coronavirus? Nope. Raising money for bigots? Yep. Spreading God’s love to tribes on the other side of the world? Not really. Wiping them out? Sometimes.

McKeever seems to think Christians, in their state of grace, don’t get angry, so I have to wonder if he’s never witnessed the hatred that pours from Steven Anderson‘s mouth, the madcap spite in Kenneth Copeland‘s eyes, or the cauldron of seething hostility that is the Westboro Baptist Church.

His God, too, has been known to get a little touchy. In fact, at one point, the Almighty got so monumentally pissed that He killed almost all land-based life on the planet.

But somehow it’s atheists who are ragers, and Christians (and their God) who are sweet and kind. Alrighty then.

Stop him if you’ve heard this one.

Since faith is required for either position,

… choosing to believe this amazing universe came together by chance and will go out the same way requires far more faith than this Alabama farm boy can muster.

He’s apparently never heard about the God of the Gaps, and never pondered the argument from ignorance that is at the basis of this inanity.

But let’s say, for argument’s sake, that the universe was indeed created by a higher power. What conclusive proof is there that McKeever picked the right god? How does he know that the blessed Creator isn’t Zeus, or Anubis, or Wodan, or Vishnu, or any other one (or several!) of thousands of deities?

He’ll probably protest it’s because God sent His son to die on the cross. But bulletproof evidence of a historical, miracle-performing Christ is hard to come by — even for intellectually honest Christians who’ve spent years yearningly looking for it.

McKeever is not above relying on the Bible to make his case in this regard, as we’ll see later. But that won’t fly, either; circular reasoning is by definition illogical.

McKeever believes, without presenting evidence, that

Christianity is the only world religion that has come through the scientific revolution and emerged intact.

Really? That’s news to me. About half of U.S. scientists self-identify as being spiritual and even belonging to a faith tradition (which isn’t the same thing as believing in a Creator). The other half plainly reject the idea that there is a God, unless you look at this study that says that nonbelievers among scientists — atheists and agnostics combined — form an almost two-thirds majority.

And if you ask the question just a little differently — Do you know without a doubt that God exists? — only one in 10 U.S. scientists says yes. Among their French and northern European colleagues, the number is even lower.

None of that points to religion having passed some sort of scientific test, much less with flying colors.

As for the historicity of Jesus, the best evidence we have points either to Bart Ehrman‘s conclusion, or to Brian Dunning‘s. Ehrman believes that the historical Christ is a myth, whereas Dunning allows that a self-styled prophet named Jesus of Nazareth possibly existed but that he was un-noteworthy in his day — and became absurdly mythologized over time.

That’s Atheism 101. For dummies. We all know this proposition as Pascal’s wager, and freethinkers have been patiently debunking it for more than three centuries.

Pascal’s wager fails on at least two counts. First, we can’t simply choose to believe — not when our pesky brain keeps evaluating and rejecting religious claims as irrational, whether we want to or not. (We could go through the motions and pretend to embrace religion, but an omniscient god would see our deceit, and probably deny us entry to heaven anyway.)

Second, even if we could somehow will ourselves into believing in god, which one(s) should we choose? “Well, mine,” McKeever would probably bluster, because true believers are nothing if not confident. But an imam would say the same thing, and so would a rabbi, a Hindu priest, et cetera. All think they are on solid ground theologically, chosen even; and all quietly pity the others for not intuiting what the real faith is.

If the actual God, were He real, doesn’t have a sense of humor, what will He do if you pick the wrong religion? Take Pascal to heart, and you may end up becoming a Christian — only to tremble before the mesoamerican deity Xipe Toltec on your day of reckoning, when He commands you to explain why you didn’t flay any people in His honor.

5. The Christian spirit of charity.

[D]oes anyone know any charitable ministry ever started by the atheists?

… all but scoffs McKeever.

Okay, I’ve learned of two or three. But show me one and I can show you a hundred hospitals and colleges, children’s homes and crisis centers begun and maintained by Christ-followers.

This is worth its own long post, if not a whole book, so let me just toss out some quick bullet points for now.

• With one five-second search, I found well over a hundred posts on the Friendly Atheist site alone detailing generous charitable giving by average non-believers. (Imagine — all those donors didn’t even expect a divine attaboy!)

• In the U.S., religious adherents outnumber atheists about 13 to 1, so it’s no surprise that the former contribute greater absolute sums of money to good causes.

• Christians who kindly pitch in often arrive in marked church vans, wearing the apparel of their religious group. By contrast, atheists helping out are less likely to wear their identity (literally) on their sleeves. The Christians are probably going to reap more notice, publicity, and acclaim.

• Researchers have found that most Christians see prayer as an active contribution to someone who needs help; this tends to reduce the amount of their subsequent donation, if any. See here.

• When an atheist donor offers assistance to the poor, no recipients are pushed into praising Richard Dawkins, nor are they asked if they’ve heard the good news about godlessness. When Christians provide help, there may be precisely such strings attached. Ulterior motives and true selflessness are uneasy bedfellows.

McKeever has an odd concept of miracles. He’s not talking about burning bushes or talking snakes, or even about pretty sunsets or the complexity of the human eye. Instead, these things are miraculous to him:

The existence of honest inquiry among believers? If that were widely in evidence among Christians, including in McKeever’s hit piece, I wouldn’t have had to write this rejoinder… and I could probably retire from Friendly Atheist.

He’s welcome to call the Bible a miracle, but stretches the truth just a bit in praising its clarity. Let’s charitably leave it at that.

We’ve already addressed the existence of the Man of Galilee (see #3).

The line about the Church — “so flawed [that] without its divine nature, surely it would have vanished long ago” — is an amazing example of a conclusion chomping on its own tail. McKeever argues that the Church is such a defective institution that its divinity is proven by its continued existence, despite how imperfect it is. Make sense to you? Me neither.

My testimony — and yours — show that that power of Jesus Christ is changing lives.

Less and less, though. Growing numbers of especially Americans and Europeans no longer buy what McKeever and his clan are selling. Two thumbs up.

If, as C. S. Lewis pointed out, a skeptic scoffs that my life is so far inferior to what a true Christian should look like, I do not argue with that. But I can reply that my life is still so far beyond what it would have been without Christ.

That passive-aggressive putdown of non-Christians doesn’t quite seem compatible with the kindness and grace that McKeever believes characterizes godly people. And he’s not even done:

I could not be an atheist on my worst day. God has done far too much for me to be so ungrateful.

There we have it. Atheists are miserable, uninformed, stingy, and thankless. McKeever sounds exactly like the other Christians (Roxane B. Salonen, Steve Harvey, Richard Weikart, Angelo Stagnaro, Father Bernard McGarty) who’d much rather hate on the godless than try to get to know them. Maybe they’re smart that way: the greater the distance, the bigger the strawmen, the fatter the checks.

If I could point them to a relevant Bible verse about how they’re doing as Christians, I would. Perhaps something involving an eye, a splinter, and a mote?

But I’ll give the last word to Mrs. Betty Bowers, America’s Best Christian:

Question: What’s the difference between atheists and evangelicals?

Answer: Atheists are honest about not following Jesus.

P.S., added Sunday afternoon: Several readers have correctly pointed out to me that I misstated Bart Ehrman’s thoughts on the historicity of Jesus. I may have been thinking of Richard Carrier. Ehrman’s position, too nuanced to do it justice in a few sentences, is closer to that of Brian Dunning’s, who I mentioned. I regret the error. For more on Ehrman, see here.

April 18, 2020
Baptist Leader Who Called Trump an "Embarrassment" in 2016 Will Now Vote for Him
Next Post