If cleanliness is next to godliness, a Florida church that sells an industrial cleaning agent as a sacrament in beverage form must be holy indeed.

Three times last year (1, 2, 3), we raised concerns about the Genesis II Church of Health and Healing (G2C), a predatory outfit that’s been advising its members to essentially drink bleach in order to cure cancer, multiple sclerosis, leukemia, Alzheimer’s, and more. The chemical, which the G2C has dubbed MMS for “miracle mineral solution,” is a kind of bleach known as chlorine dioxide.

Alarmed, the Food and Drug Administration twice warned the public that chlorine dioxide is unacceptably risky for human consumption. “Potentially life-threatening side effects” include

Incredibly, eight months after the last FDA notice, G2C is not only still in business, it has found a brand new market for its “sacrament”: people who want protection from the coronavirus. Those who’ve already contracted COVID-19 are treatable with the same miracle solution, the so-called church claims.

The organization recommends adults take up to six doses a day for five days to treat the coronavirus, with children receiving about half that amount. Genesis II Church says MMS “should wipe it out this flu-like virus that many are being scared with its presence in the world.”

Evidently, the church’s grammar is just as effective as its bleach cocktail.

It looks like the authorities are finally getting serious about shutting down G2C’s dangerous MMS hooey.

A federal judge in Florida on Friday ordered the leaders of a self-described church to stop selling an industrial bleaching agent they promoted as a “sacrament” that can treat and prevent the coronavirus. …

U.S. Attorney for the Southern District of Florida Ariana Fajardo Orshan praised the decision. “We will zealously pursue perpetrators of fraud schemes seeking to take advantage of the COVID-19 pandemic,” she said.

So far, the scammers don’t appear to be blinking, reports the Washington Times.

Genesis II Church, which is lead by Archbishop Mark Grenon, Bishop Joseph Grenon, and Rev. Jordan Grenon, argued that as a church, they don’t need the government to approve its sacraments.

With any luck, selling a mixture of sodium chlorite and hydrochloric acid as a cure-all will soon be a thing of the past. I’m afraid, however, that a mixture of religion and horseshit (but I repeat myself) will endure for a few more centuries. 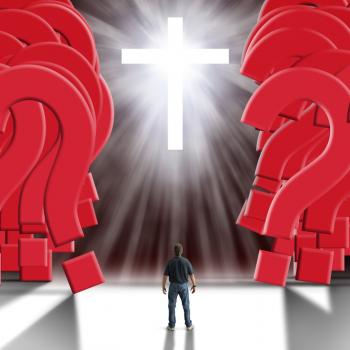 April 18, 2020
This Man Has Seven Reasons For Rejecting Atheism, and None of Them Make Sense
Next Post