COVID-19-Defying Pastor Wants People to Send Him Their $1,200 Stimulus Checks

Pastor Tony Spell, the head of Louisiana’s Life Tabernacle Church who has refused to close his church because “True Christians do not mind dying,” is coming after everyone’s stimulus money.

In a video released yesterday, Spell encouraged his followers to hand over their $1,200 checks. Because that’s what good Christians do.

If you don’t have a church, give through my website… I’m here on the Mississippi River. I’m here at Red Stick. Baton Rouge. #PastorSpellStimulusChallenge.

Apparently, it’s a big sacrifice when his own family donates their money to… him.

Ironically, though, Spell is the one guy who shouldn’t be getting money based on his own rules since he’s still holding in-person church services and is therefore collecting offerings.

He’s not interested in helping pastors in a time of need. This is about his own greed, ripping off the very people who might need that money for rent, food, medicine, or more.

It’s bad enough that some Christians are putting their congregations in harm’s way. This guy doesn’t just want to take their lives; he wants what’s in their pocketbooks first. 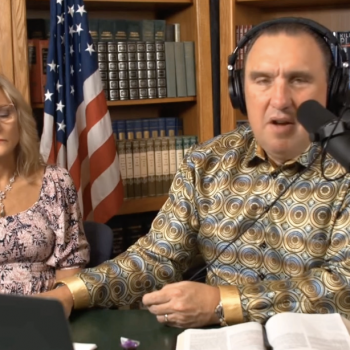