Earlier today, students at Liberty University filed a class action lawsuit against the school and its president Jerry Falwell, Jr., saying Falwell’s decision to keep the school open put their lives at risk.

Falwell has insisted for weeks now that the COVID-19 threat isn’t serious enough to warrant shutting down Liberty University for good. He said last month that the school was back open for students. In fact, an estimated 1,900 students were back on campus, which is bonkers even if they were supposedly keeping their distance from each other. Faculty members were also told to teach online classes from their offices and hold office hours with students. And all of this was happening despite Liberty having the resources to go fully online for everyone.

It was so bad that one faculty member (who’s transferring schools at the end of the year) published an open letter in the media calling for Liberty’s board of trustees to override Falwell’s desire to put everyone in danger.

It got worse when reporters carried out their journalistic duties. Last week, Falwell said the school had “taken out warrants” against the news site ProPublica and a freelancer for the New York Times over reporting that said Liberty’s re-opening brought “coronavirus fears” along with it. Those warrants came from Liberty’s campus police… who, like everyone else there, have an obligation to do whatever Falwell wants.

Whether or not anyone took his threats seriously, the point was that Falwell was raising hell about a problem of his own creation. Instead of taking responsibility for potentially putting his staff and students in harm’s way, he treated everyone else like the enemy, as if they were more interested in persecuting him than telling the truth (and looking out for the students’ best interests).

Now at least one student is speaking up — and many more may join her.

The federal lawsuit filed today on behalf of “Student A” says Falwell and Liberty University “placed their students at severe physical risk and refused to refund thousands of dollars in fees owed to them for the Spring 2020 semester.”

… The suit, filed in Virginia federal court, claims that though the school suspended most services and moved classes online as COVID-19 spread, it purported to remain open to avoid returning student fees for room and board and other activities. At the same time, Falwell Jr. recklessly downplayed the significance of the pandemic, claiming in an interview that people are “overreacting,” comparing COVID-19 to the seasonal flu, insinuating that the reaction was an attempt to harm President Trump, and even suggesting the virus may have been a “Christmas present” from North Korea and China.

… This placed students and their families in the difficult position of deciding whether to remain on a campus that has been effectively closed, in residence halls that were not outfitted to keep students safe, or move home and forfeit the amounts they had paid for room and board and other campus fees.

The lawsuit goes on to say that tuition for the school year ranged from $9,200 to $16,000. But Liberty would only give back $1,000 to students who had been living on campus but chose not to return in light of the pandemic. That money wasn’t even cash. It was a credit that would only apply to the fall semester that begins later this year. So if you’re leaving Liberty, you’re out of luck. If you lived off-campus, you don’t even have an option here; you’re getting nothing back.

The fact that Falwell bullied one parent on Twitter, calling him a “dummy,” didn’t help either. That’s why the lead plaintiff is anonymous — she fears retaliation.

The complaint notes that: “Liberty has further shown its willingness to retaliate against anyone who criticizes Liberty’s COVID-19 response, going as far as seeking and obtaining arrest warrants for members of the media who wrote news stories critical of Liberty. Upon information and belief, people who have made social media statements about Liberty’s COVID-19 response or provided quotes in news stories on that same subject have received harassing or intimidating messages from Liberty supporters and critics alike.”

The lawsuit said Liberty is “improperly” keeping money paid by the plaintiffs for tuition despite the fact that they “can no longer obtain the value or benefit of the services for which they paid.” That’s a breach of contract. The suit also claims “Unjust Enrichment” by keeping fees students gave them instead of giving back the “unused, prorated portion of the fees.”

They also complain, perhaps ironically, about “conversion.” Legally, that means they paid for a service (on-campus classes) but are not getting that in return.

Falwell will inevitably complain about this, too. But the complaint is now coming from inside his house. This isn’t the “liberal media” out to get him. This is a Christian student worried about her safety and demanding the education she paid for; she could be joined by many others.

It’s good to see a student speaking up like this. Let’s hope she’s not the only one. I don’t just want her to win. I want her and every other future plaintiff to get their money back so they can transfer to a real school instead of one ruled by an incompetent dictator who seems to care more about lining his pocketbooks that making sure his students get the best possible education in the safest environment. 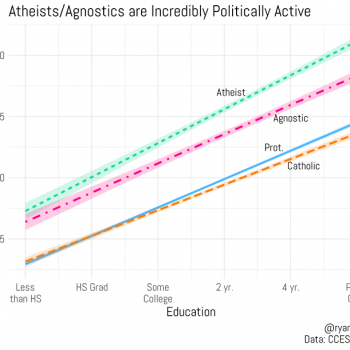 April 14, 2020
Hey, Democrats: Atheists Are the Most Politically Active Group in the Country
Next Post