Hey, Democrats: Atheists Are the Most Politically Active Group in the Country April 14, 2020 Hemant Mehta

Hey, Democrats: Atheists Are the Most Politically Active Group in the Country

It’s no secret that the Republican base includes a sizable number of white evangelical voters. They’re active, they vote, they don’t have the “my candidate or bust” mentality held by far too many on the left, and this is why they get what they want regarding public policy and judges. (Roughly 80% of white evangelicals voted for Donald Trump in 2016.)

We’re all worse off because of their political involvement.

The question for us, then, is whether non-religious voters can ever have the same clout on the other side.

Here are some obvious problems with that:

1) Only about 70% of non-religious Americans voted for Hillary Clinton in 2016. We don’t pledge allegiance to Democrats as faithfully as white evangelicals do to Republicans. Conservative Christians always vote “above their weight,” percentage-wise, compared to how many of them are in the country.

2) There’s also the longstanding political taboo against candidates reaching out specifically to non-religious people — they tend to avoid voicing their support for complete church/state separation and public policy that relies on facts and not faith.

3) We don’t even have a specific list of things we expect from candidates. Not all Secular Americans care about church/state separation or science education the same way white evangelicals care about forcing women to give birth against their will and hurting LGBTQ people. (In a sense, then, it’s easier for Republicans to pander to white evangelicals because everyone knows exactly what they want to hear.)

All that said, we’re a growing percentage of the American population. “Nones” are arguably the largest single “religious” group in the country now. If we were as active as white evangelicals, it would become much harder for politicians — especially Democrats — to ignore us.

Professor Ryan P. Burge of Eastern Illinois University crunched the numbers, and in a new post, he says atheists are a lot more politically active than any survey has shown. If he’s right, that means Democratic candidates up and down the ballot would be wise to pay a lot more attention to our desires.

Burge looked at the Cooperative Congressional Election Survey, which asked people about their political activity over the past year — Did you vote? Did you donate to a campaign? Did you knock on doors for a candidate? Did you contact a public official? Things like that.

In every instance, atheists — not “Nones,” but atheists — were at or near the top of every category. They were more likely to answer “yes” to the examples listed above.

A quarter attended a march or protest compared to just 4.4% of white evangelicals. Four in ten atheists have contacted a public official or donated money to a candidate. That’s tied with Jews, but is much higher than most Christian groups in the sample. Agnostics are not far behind, either. They usually trail atheists but just a few percentage points for each of the political actions.

Even when Burge took formal education into account, atheists were more like to answer yes to doing the six activities than other religious groups: 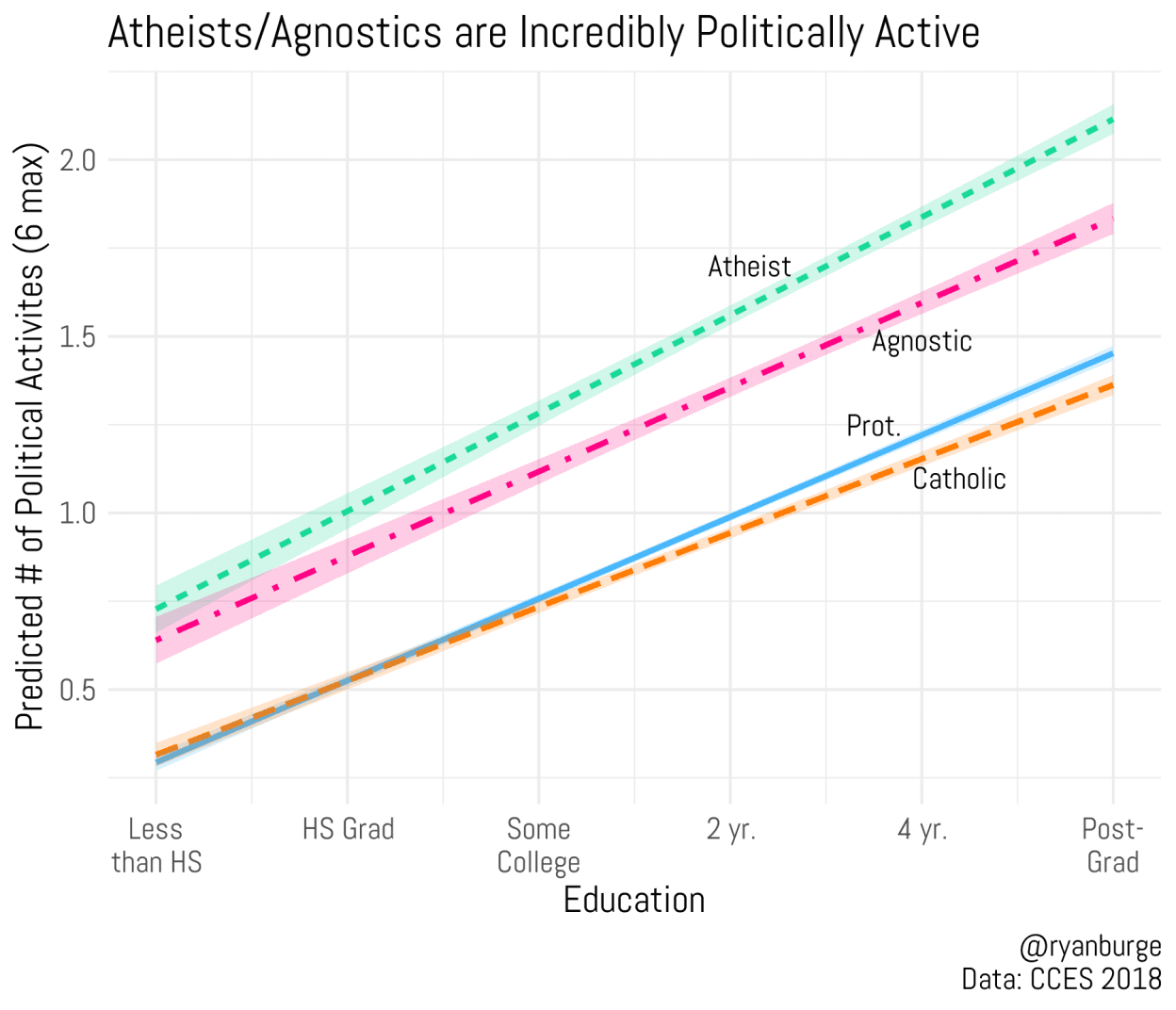 More education leads to higher levels of political activity among all religious groups, but the relationship is even stronger for atheists than other groups. An atheist with a graduate degree participated in 2.1 political activities in the last year. It was 1.8 activities for agnostics. For Catholics and Protestants it’s between 1.3 and 1.4 activities. That’s not a small difference.

Burge notes that there’s another reason this may be the case: When you’re in the political minority, of course you’ll be more engaged. You want to see change! Still, that means the 2020 elections, which will likely come down to a handful of votes in a handful of swing states, could hinge on how well Joe Biden energizes non-religious voters who are already inclined to vote for Democrats.

I would also add that this is all well and good. But we know “atheists” are a relatively small slice of the population compared to conservative Christians. The “Nones” as a whole aren’t as politically active as white evangelicals.

So does any of this even matter? After all, it seems logical that the type of person willing to call herself an atheist is also eager to take religion-in-politics more seriously too. I would argue it does, because our group is still growing and we have a much better chance of influencing people than conservative Christians who got everything they wanted along with a president who’s utterly incompetent in the job.

Democrats don’t have to pander to atheists. We’re not asking for special treatment or a curtailing of anyone’s rights. But they can use our energy in their campaigns if they reach out to us. They can excite us by fighting for issues that matter to most Secular Americans, like protecting science and sex education, recognizing the seriousness of climate change, fighting for evidence-based policies, promising less religious influence over the government, supporting women’s rights and LGBTQ rights,

We’re an untapped resource. In an election where every vote will matter, it’s irresponsible for Democrats up and down the ballot to ignore us the way they have in the past. 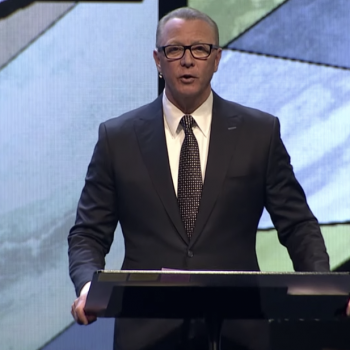