Cardinal George Pell, the Catholic leader who was convicted of raping little kids until Australia’s highest court, this week, overturned his sentence, delivered an Easter message full of the same ignorance we’ve come to expect from a man whose own lawyer once described his actions as nothing more than a “plain vanilla sexual penetration case where the child is not actively participating.”

Pell wrote in a piece for the Weekend Australian that things are looking up in the world! There’s always a silver lining! Even in — wait for it — the Church sex abuse crisis.

The sexual abuse crisis damaged thousands of victims. From many points of view the crisis is also bad for the Catholic Church, but we have painfully cut out a moral cancer and this is good. So too some would see COVID-19 as a bad time for those who claim to believe in a good and rational God, the Supreme Love and Intelligence, the Creator of the universe. And it is a mystery; all suffering, but especially the massive number of deaths through plagues and wars. But Christians can cope with suffering better than the atheists can explain the beauty and happiness of life.

Leave it to Pell to write a paragraph that begins with “The sexual abuse crisis damaged thousands of victims” and includes the word “but.”

And just because Christians have false hope doesn’t mean atheists can’t find beauty in the sacrifices of the first responders putting their lives at risk to help strangers, and doctors and nurses working long hours to help those with COVID-19, and everyone who’s donating money and masks to help those who need it, and even politicians who risked their popularity in the early stages of this pandemic to make the difficult choice to inconvenience everyone’s lives in the name of public health.

There’s joy in seeing people go out of their way to make our world a better place in the midst of a pandemic while a president propped up by white evangelical Christians continues screwing everything up.

Pell didn’t stop slandering atheists there, either. He included a slew of ignorant comments straight out of Christian apologists’ books and Pure Flix movies.

The atheists today believe that the universe, including us, is the product of blind chance, that no transcendent Intelligence exists to help explain our DNA sequence, the 10,000 nerves connected to an eye, the genius of Shakespeare, Michelangelo, Beethoven and Albert Einstein.

Jesus Christ, this man is dumb. There’s all the sex abuse, yes, but also, he’s dumb. To say that atheists believe in “blind chance” and that there’s no natural explanation for things that entire books have been written about just shows how Pell hasn’t learned a damn thing since being locked up.

He finally addressed his own situation:

I have just spent 13 months in jail for a crime I didn’t commit, one disappointment after another. I knew God was with me, but I didn’t know what He was up to, although I realised He has left all of us free. But with every blow it was a consolation to know I could offer it to God for some good purpose like turning the mass of suffering into spiritual energy.

God was with him. But not, apparently, with any of the victims of the Catholic Church’s sex abuse crisis.

Somehow, that’s his Easter message. He may not have to go back to jail, but he would be wise to keep his mouth shut. There’s nothing he says that’s worth hearing. That was true years ago and he’s showing us why it’s still true today.

April 13, 2020
Kentucky Cops Sent Warnings to Dozens of Christians Who Went to Church on Easter
Next Post 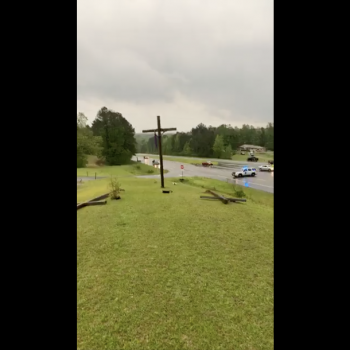