After Tornado Destroys Dora, AL, Local Man Thanks God for Leaving Up One Cross

A tornado hit Dora, Alabama yesterday and the damage is intense. One news source says three people are injured, one gas station was entirely destroyed, and Lawler Baptist Church had major roof damage. It’s possible that everything is even worse than that. We’ll find out in the coming day or so.

But one local man, Trey Dunnam, posted a video showcasing the damage… only to celebrate the fact that one of three crosses near that church was still upright. The middle one! The Jesus one! On Easter Sunday! Hallelujah!

I’m not posting this to mock him or his emotions. Here’s hoping his family and his community come out of this disaster with their health and homes intact.

Still, it should go without saying that, like a leather-bound Bible found after fire damage, a still-standing slab of wood is not a sign of God. If God wanted to send a message, then He could’ve stopped the tornado altogether, not leave a business card after committing an egregious act of divine vandalism.

It’s natural for those affected by a tragedy to look for any piece of good news, but when a video like this has been shared more than 30,000 times so far, you know some people are genuinely treating it as proof of God’s love, not a sign that God’s nowhere to be found. This is a coincidence, not a sign of something holy.

(Thanks to Steph for the link) 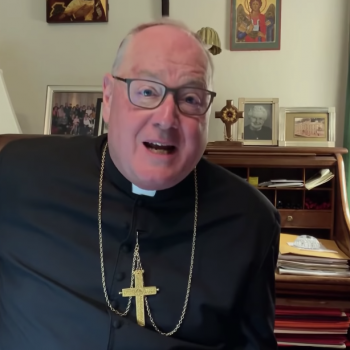