Conservatives Lash Out After KY Gov. Says Churchgoers May Be Quarantined

Kentucky has a statewide stay-at-home order, but it’s unclear if churches are exempted from that rule, which means Easter Sunday could be a disaster for citizens. If people dare to attend a service, in person, with hundreds of other people, they could be putting everyone they meet at risk.

Yesterday, Democratic Gov. Andy Beshear warned people — not just Christians, but everyone — that he was taking the stay-at-home order seriously. He said that if there were any gatherings of more than 10 people, law enforcement officials would record all license plates and make sure you are quarantined for 14 days. It’s for the sake of everyone’s health. You can see it around the 37:11 mark:

If you’re going to expose yourself to this virus, and you make that decision to do it, it’s not fair to everybody else out there that you might spread it to. This is just an example of personal responsibility. We’re going to make sure that those that are going, and get noticed, that this will happen, that if they’re going to participate in the mass gathering, it’s 14 days, self-quarantined, at their home.

Somebody makes that decision, okay. But understand that this is the only way that we can ensure that your decision doesn’t kill somebody else.

All of that is sensible. If you’re going to spread a disease, you must be isolated from the public.

But of course conservative Christians — who have no self-worth if they’re not pretending to be persecuted — are claiming Beshear (and anyone else who’s a Democrat, really) wants to punish Christians for practicing their faith.

Folks, I tried to warn religious leaders that this was going to happen. If you give an inch the godless leftists will shut down your churches, threaten to arrest your preachers, and quarantine your congregation.

Jesus Christ, he’s an idiot. There’s no atheist group celebrating the pandemic because it moves church services online. If Starnes thinks Beshear is going after Christians, then he ought to explain why it took a pandemic that shuts down all mass gatherings for the plan to go into effect. It’s not like mosques, synagogues, and book clubs are exempt from the rule.

But it’s easy to lie to Republicans by pretending Democrats hate Christians.

By the way, not only is Beshear a Christian, he and his wife are deacons at their church.

Sen. Rand Paul also jumped in on the right-wing bandwagon:

Taking license plates at church? Quarantining someone for being Christian on Easter Sunday? Someone needs to take a step back here.

Kentucky Governor Announces Plan to Record License Plates of Easter Church Goers and Force Them to Quarantine for 14 Days https://t.co/z7U42liQRh

Again, this isn’t a plan to persecute Christians. It’s a rule to prevent all mass gatherings for the sake of public health. I swear, anytime a neutral rule applies to Christians, conservatives think it’s only about them.

I would urge people to avoid church in general, but at least this weekend, avoid in-person services. Watch a service online. If you pray from home, God will still pretend to hear you. 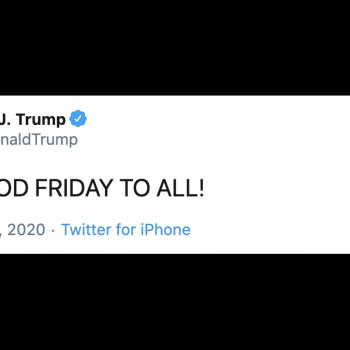 April 11, 2020
Trump, Clearly Unaware of What Easter's All About, Tweets "HAPPY GOOD FRIDAY"
Next Post

April 11, 2020 Right-Wing Pastor: The Role of Elected Officials is "to Point People to God"
Browse Our Archives
What Are Your Thoughts?leave a comment