Listen to This “Prophet” Share His Dream of Dr. Fauci Turning into a Big Rat April 6, 2020 Hemant Mehta

Listen to This “Prophet” Share His Dream of Dr. Fauci Turning into a Big Rat

I mentioned yesterday that self-described “prophet” Pastor Jeremiah Johnson recently had a dream in which Dr. Anthony Fauci turned into a giant rat in order to defeat Donald Trump.

He explained all this in a bizarre article. That was weird enough. But it turns out it’s even weirder when he tells the story in his own words. He sounds like someone who just did a ton of pot at a party and now wants to tell you how the world really works.

He did this on the show It’s Supernatural, hosted by Sid Roth. That’s the show where Christian dreams are taken completely seriously — and even reenacted. Roth has featured a man saying Jesus taught him to play the saxophone while he was dead and another guest who said God literally regrew his missing hand.

Roth doesn’t have an audience or an acting budget right now — he’s properly self-quarantining — so just take a look at Johnson telling Roth the rat story.

JOHNSON: Well, I had had a dream on March the 30th where I was sitting in a press conference in the dream with Mike Pence, Donald Trump, and Dr. Anthony Fauci. And I was sitting in the front.

Trump was giving a very hopeful, encouraging word over the nation, and suddenly, Dr. Fauci turned into a big rat on the… stage. And I was stunned in the dream. And I ran around to the side of the stage and, to my amazement, there was a group of business-looking men, many of them were not American, and they were handing money to him. And God began to speak to me.

I woke up at 3:30 in the morning on 3/30 — March 30th — God immediately began to speak to me and say that there is a plot right now to make Donald Trump a political puppet rather than the prophetic anointing that God has given him…

Yep. Totally normal. Guy takes his dream as a sign from God, egged on by a Christian talk show host who will believe literally anything people tell him, all as part of an attempt to undermine one of the only voices of credibility coming out of the current administration.

Anyone who takes these Christians seriously is putting everyone they meet in danger. 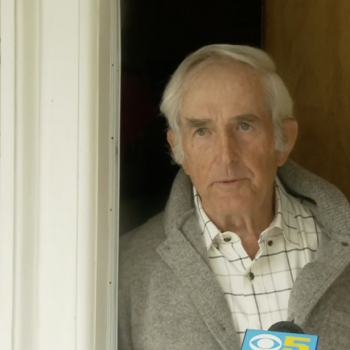