Some Christians Are Still Going to Church, Citing Protection by “Jesus’ Blood”

Churches wouldn’t still be open if not for the fact that plenty of churchgoers are still willing to attend, against the advice of the CDC and scientists everywhere. While plenty of churches are hosting online services, CNN interviewed a handful of people in Ohio who explained why they are still attending Solid Rock Church in the city of Warren.

The answers are as ignorant and self-absorbed as you can expect.

One woman answered, “I wouldn’t be anywhere else.” When asked if she was concerned about getting infected or infecting others, she responded, “I’m covered in Jesus’ blood!”

She wasn’t the only person to offer “Jesus’ blood” as an answer, as if it’s a cure for every disease. The pastor at the unnamed church was also interviewed, claiming that no one in his church was sick, because if they were, “he would know.”

(He would not know. The virus can spread among asymptomatic people.)

“Don’t go sharing any fake news about me!” he shouted as he drove away.

Families with small children hugged the greeter holding the door open, who then went on to hug everyone else who came through: young, old, and in-between.

Church leaders refused to provide a statement as to why they are still open. A note on the door claimed that they’re practicing social distancing in the sanctuary, but the camera crew wasn’t allowed in to confirm. Given the hugs exchanged at the doorway, though, that seems unlikely.

Unfortunately for them — and for all of us — faith will not prevent the spread of COVID-19. By refusing to listen to experts, in the name of religious freedom or American superiority, they’re making sure the virus always has somewhere to go. Who knows how high the body count has to be before they finally realize what they’ve done. 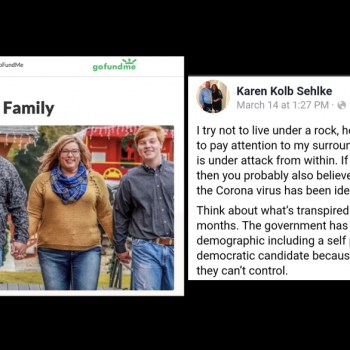