Right-Wing Pastor: Avoid COVID-19 Vaccines Since They’re from the “Pit of Hell”

We’ve seen plenty of irrational responses to COVID-19 in religious circles — from holding in-person gatherings, to prematurely declaring the crisis over, to proclaiming it an avatar of Satan that must be spat on — but this one may be the most dangerous of all.

Right-wing pastor Curt Landry said this week that believers should shun any eventual vaccine that protects you from the virus because it is surely “from the pit of Hell.”

“Do not pray, do not hope, do not think, ‘Oh, praise God they are going to have a vaccine,’” Landry said. “That vaccine is from the pit of Hell. Do not pray for those vaccines, and do not take the vaccine. These vaccines are going to be coming, they are not going to be good. They’re not good for you physically, and spiritually, they’re a set-up for what shall come later.”

Landry warned that “they are going to have a computer record of everybody who does take the vaccine,” which will allow them to know who will later accept the Mark of the Beast.

“In order for them to put the chip in, you are going to have proof and verification that you have had these vaccines,” he said. “If you won’t take the vaccines, then you don’t get the mark, and you can kind of figure out where that goes.”

Those are lofty claims with absolutely zero evidence. The “Mark of the Beast” is a reference to the book of Revelation, the last book of the New Testament, which is probably one of the most metaphoric books of the Christian Bible. As you can probably guess, there are no reference to vaccines. The idea that a vaccine is a tool of the devil should have been eradicated when polio disappeared.

As one popular meme says, anti-vaxxers may want a world without vaccines, but the world is in a rare state of chaos without just one vaccine. Nobody should be taking medical advice from anyone but actual doctors and scientists. 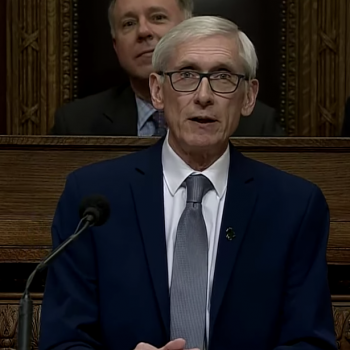 April 6, 2020 Ignorant Wisconsin Republicans Want the Governor to Open Churches for Easter
Browse Our Archives
What Are Your Thoughts?leave a comment