No TV network should be airing Donald Trump‘s daily rallies. They’re not informative, and they’ve become a substitute for his campaign rallies, where he mocks the press for quoting him directly, stirs up resentment toward his perceived enemies, and throws out slurs against groups he doesn’t like. Every network can easily air clips afterwards, fact-check them as they do it, and offer the full video online for anyone who wants to watch it. It would be a better public service if they did that.

Today’s episode was a perfect example of why.

Rather than offer useful information, Trump ceded time to Mike Lindell, the CEO of MyPillow and a low-level hero among MAGA cultists, who used the opportunity to praise Jesus during the “briefing” with the presidential seal right below him on the podium.

“God gave us grace on Nov. 8, 2016, to change the course we were on,” Lindell said, referencing the day of Trump’s election. “God had been taken out of our schools and lives, a nation had turned its back on god. I encourage you to use this time at home to get back in the word, read our Bibles and spend time with our families.”

Lindell, standing behind a podium bearing the presidential seal, said Trump “gave us so much hope” and cited the strong economy that has since cratered due to the virus.

“With our great president, vice president, and this administration and all the great people in this country praying daily, we will get through this and get back to a place that’s stronger and safer than ever,” he said.

We know Trump lies. But now he’s bringing in people to lie for him.

Lindell is wrong. God was never “taken out” of school because students are welcome to pray or read their bibles. Forced Christian prayers are no longer acceptable — as it should be. (Trump hasn’t changed that, either.)

The nation hasn’t “turned its back on God,” since the majority of people are still religious. They’re just starting to recognize that white evangelical Christianity has become a cover for a political party that cares more about power than Jesus. If anything, Trump has only made that distinction more clear.

And the idea that this administration, which dragged its feet in responding to COVID-19 while refusing to provide complete aid to states if their governors don’t show sufficient obsequiousness, is going to make us stronger has been disproven more times that we should have to count.

It is appalling that anyone, much less a president, would waste the nation’s time by allowing a pandemic briefing to turn into a church service. It’s even more disturbing how few people care. Then again, given all the ways this administration tramples over the Constitution, you can hardly blame the media for not sufficiently covering them all. 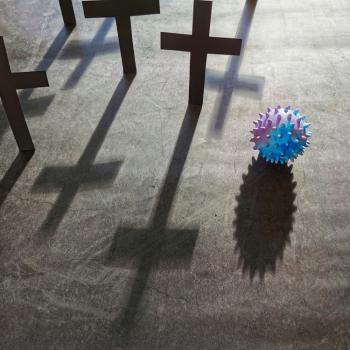 March 30, 2020
The World Over, Stubborn Believers Don't Care About Their Survival — or Yours
Next Post