I’m Going to Be a Contestant on Jeopardy! Here’s How I Got There.

So here’s a story for you…

Almost exactly a year ago, I took the online test for Jeopardy. It’s 50 questions long and you never find out your score, though you can always try to guesstimate it. I had taken it a couple of times before, but nothing ever came of it. I didn’t think this time would be any different. Maybe I failed. Maybe I did okay, but I wouldn’t be selected to go any further. It’s one of those things you just do and put in the back of your mind.

I was surprised when, this time, I got an email inviting me to an in-person audition. I made it through the first filter! That audition is meant to give the casting folks a chance to see people’s personalities and ability to perform in a mock game. (Plus, there’s another 50-question test, mostly to make sure no one cheated online.)

So I drove up to Milwaukee last November where I met a few dozen other hopefuls in a hotel lobby, along with a local news team:

Did it go well? I’m normally a cynical person, but I felt… not awful.

At least I knew which questions I didn’t know and felt good about my educated guesses. The mock game went smoothly, as did the brief conversation I had with the casting team. But I was surrounded by a lot of (obviously) smart people with interesting and funny personal anecdotes. I’m sure everyone else was doing what I was doing and playing a mental game of That person is totally going to be on the show instead of me.

Still, neat experience! Definitely a fun story even if nothing came of it. (“Let me tell you about the time I almost made it on Jeopardy!…”)

In case you’re wondering, I didn’t spell out my profession. I said I was a “blogger” who covered religion and politics — which is accurate if not specific — and left it at that.

There was another film crew that pulled me aside after everything was over to ask some questions, and a few seconds of our interview appeared in an ABC special that aired in January just before the show’s recent “Greatest of All Time” tournament. You can catch me around the 9:45 mark. 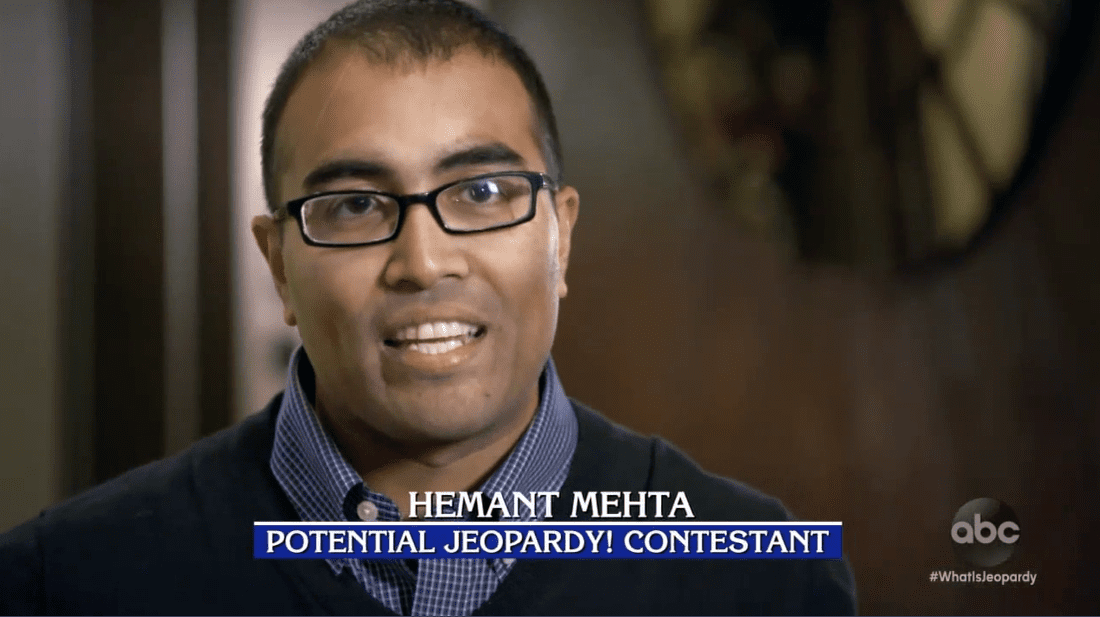 They said to us at the audition that approximately 80,000 people take the online test each year. About 3,000 are selected to come to an in-person audition. About 400 actually get invited to be on the show.

This was unspoken: Most of them are going to lose.

The odds of getting to play, much less winning, are against everyone.

But to those of us in the room that day, they said we were in the “contestant pool” for 18 months. If they wanted us to be on the show, we could get a call anytime between now and then… but (let’s be real) probably never.

There are lots of stories online from contestants who put the audition out of their minds entirely, only to get a call in month 16 or 17. (Or even month 20 because why not.) There are even more stories of people who never get that call, so they just keep auditioning again every couple of years.

I got a call three weeks later.

Holy hell, I got a call.

I was about to pick up my kids from daycare one night when a random number from “Culver City, CA” popped up on my phone. It was completely unexpected and… amazing? I mean, how often do we get pleasant surprises these days? From what I can gather, they didn’t call because I had some crazy-great audition. I think I just got lucky in terms of who they wanted and when they needed contestants. ¯\_(ツ)_/¯

They told me I would need to fly myself out to California in six weeks to film an episode. I didn’t bother looking at a calendar. I would be there no matter what. (Contestants pay for their own flights and hotel rooms, but anyone who loses the game is guaranteed $1,000, so it all balances out.)

I spent all the free time I had in those weeks brushing up on the show’s most popular categories: World capitals, Shakespeare, American history, Geography. I avoided “trivia” sites like Sporcle but played every past Jeopardy game from present-day to as far back as time would allow. I made it to mid-2017 by the time I got on the plane. Besides just getting familiar with the content, I held out hope that the show’s writers might have written 100 clues about one category, only to spread them out over the years. Even though I’ve watched the show often enough, it gave me better insight into the way everything is asked, what the “buzzwords” are, and what I needed to study. (Answer: More. Always more.)

Something about playing dozens of games at a time, instead of watching it once a day, really hammered home how I was doing.

By the end of January, my Google Maps search history was just bananas, jumping from islands to national borders to rivers to deserts. Wikipedia became my best friend. As someone who rarely drinks, I realized I knew absolutely nothing about alcohol (“Potent Potables”) to the point where it baffled me to find out anyone would put an onion in a liquid or that there were 38123912 different kinds of drinks made with rum.

I also found out how little I really knew about movies. And classic literature. And opera. And Canada.

My strengths were anything related to wordplay or crosswords, religion (I would hope), and numbers… but it’s not like those topics come up much. Maybe once in a game, tops.

Contestants have no clue what the categories will be until the game begins. A Ph.D. could play a college dropout and it’s anybody’s game. It’s all just a giant crapshoot. There were plenty of practice games I played where I felt like I knew next to nothing, so naturally, the fear of potential embarrassment was high no matter how many “good” games I played. I spent far too much time thinking about how, exactly, I would end up making an ass of myself on TV, only to live in perpetuity as a meme.

I arrived in California at the end of January — thankfully several weeks before they shut down filming due to COVID-19.

They were taping five shows that day, and I’d be somewhere in that mix. I spent a few hours that morning going through an orientation with my fellow contestants. We practiced on (the real!) stage with (the real!) signaling devices, and got the standard advice: Don’t buzz in too early or you’ll be locked out for a fraction of a second. And Once Alex is done reading the clue and you see the off-screen lights, buzz in like there’s no tomorrow. It’s a delicate balance that can make or break everyone’s game.

We also got a lesson in the unwritten rules: No Daily Double wagers ending in 69 or 420. No slowing down gameplay if you’re ahead because we’ll edit out your stalling. (We’re onto you.)

Besides makeup and paperwork, we also went over which pre-submitted stories Alex Trebek might chat about with us during the show — though we were also told he might go off-script. (The idea of ad-libbing with Alex Trebek on national TV is horrifying.)

As for the other contestants, they were honestly delightful. As much as we wanted to beat each other, I was surprised how much we were also rooting for each other when we weren’t playing. I thought it might be easier if I went in thinking, You’re all going down. Instead, when I was told I would be taping the Wednesday show — only seconds after the Tuesday taping finished — my fellow challenger and I fist-bumped and hugged because we had just spent hours getting to know each other and it was finally our turn.

I took my spot at the podium where Ken Jennings had recently won $1 million, awkwardly smiled into the camera as filming began, and Trebek walked onto the stage.

Interesting thing: For security reasons, we don’t get to see Alex Trebek until the tapings begin. He knows the clues, therefore we can’t be around each other. What you see on the show is really the only time the contestants see him. Except for a few seconds after the first “commercial break” (when he takes a quick picture with the challengers) and for a minute after the episode ends (when he chats briefly with the three contestants), there isn’t even small talk.

For what it’s worth, he looked good! He looked healthy. He was joking with the studio audience during breaks. We’re all wishing him the best.

As for the show itself… my lips are sealed.

It goes without saying that we’re not supposed to reveal the clues or the results. My parents couldn’t make it to the taping and they still have no idea what happened. (They are very upset about this.)

Here’s what I can tell you: It was an emotional rollercoaster. There were moments where I felt amazing and moments where I felt nothing was going right. (In which order? WHO KNOWS.) And all of those feelings came and went within seconds because the show is taped in real time.

If we gave a wrong answer, we were advised to just “shake it off” and keep moving forward. (That’s just good life advice.) There are so many instances when all three contestants know the answer and it’s a race to the signaling device — followed by utter frustration when someone beats you to a clue you would’ve gotten right. There are moments when players kick themselves for not knowing something they feel they should have known.

Even today, two months after the taping, I couldn’t tell you most of the clues we had. I have no memory of how I reacted to much of anything.

It took a year — including several weeks of intense cramming — for the opportunity to play for 22 minutes (with the possibility of more) against one person who’s already a champion and someone else who’s a wild card. So many things can happen to change the outcome of each game — and anyone who’s ever played can undoubtedly tell you every single one of them.

Hell of an experience, though. I can’t believe it happened. 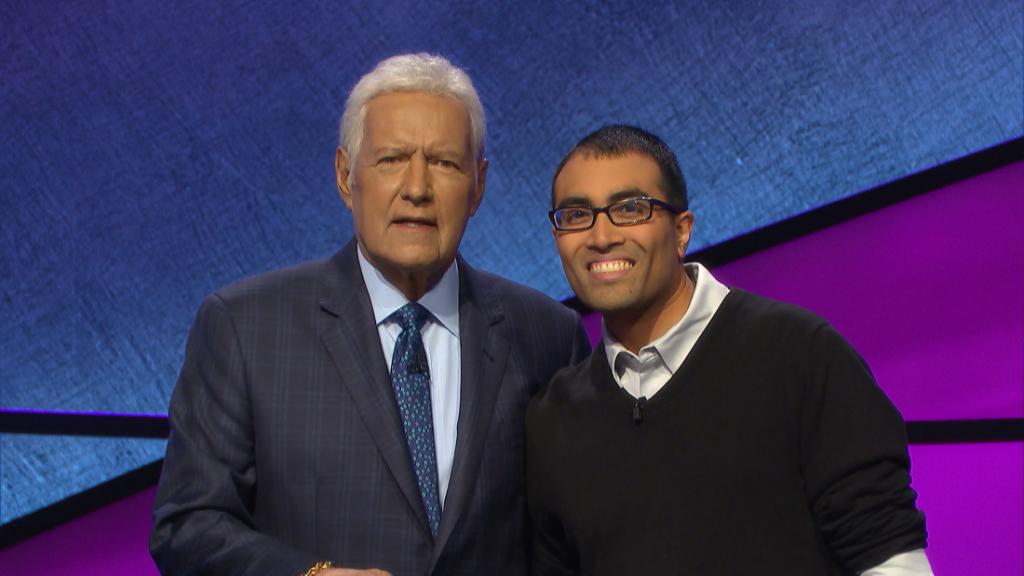 Here’s hoping you can catch the episode. It airs on April 1. Next Wednesday. No joke. 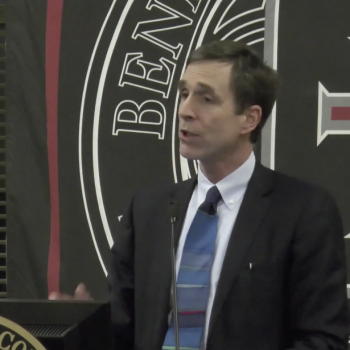 March 25, 2020
Catholic Writer: During the COVID-19 Outbreak, Protecting Life is Overrated
Next Post 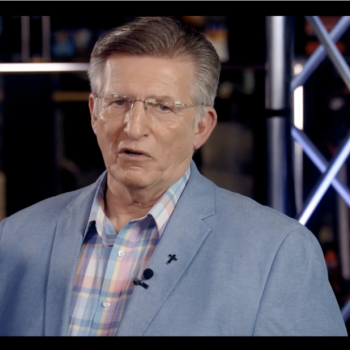