Christian Activist: In This Pandemic, Donald Trump is “So Sensitive to God” March 23, 2020 Beth Stoneburner

Christian Activist: In This Pandemic, Donald Trump is “So Sensitive to God”

No president in American history has been as “sensitive to God” as Donald Trump.

If you believe any of that, then you must be right-wing conspiracy theorist Chris McDonald, since no sensible person would ever mistake Trump as a seriously devout man.

He made the comments on his “The MC Files” show last week:

“He’s got a prophetic mantle on him in the sense that he’s been called to a prophetic time,” McDonald said. “He is a man unlike any I have ever seen that is so sensitive to God in the sense that he is trying his best — and he may not do it correctly all the time, he’s never going to get right all the time — but Amanda, he’s trying. I see it in him. He’s trying so hard to listen to God.”

“He’s trying so hard to listen to God and let God rule through him in the nation,” McDonald continued. “We’ve never had a president, going all the way back to George Washington, even the early presidents were not as sensitive to God as this one is.”

Imagine how delusional you have to be to think Trump is “trying his best” at anything that doesn’t benefit himself.

His “best” apparently includes firing the pandemic office, making more than two dozen false claims about the virus, and causing the entire government to not take swift and necessary actions when it was needed. For goodness’ sake, Trump wasn’t even aware that the flu killed thousands of Americans each year.

This is the man God supposedly raised up “for such a time as this”?

For an all-powerful being with an infinite amount of resources, that’s hardly a worthy endorsement. 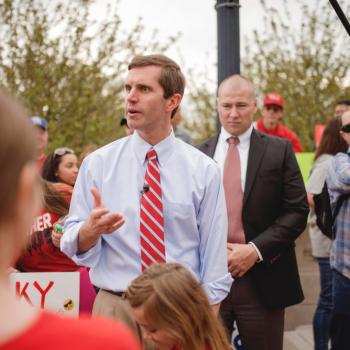