Survey Finds Religious Americans Are More Afraid of… Everything

We’re living in scary times. That goes without saying. And yet Secular Americans may be less afraid than religious people.

The Association of Religion Data Archives just released the annual “Chapman Survey of American Fears” — a survey that asks people how much they fear a variety of things, ranging from clowns to heights to cyber-terrorism.

Naturally, Ryan P. Burge of Eastern Illinois University was quick to parse the data based on religious differences.

There wasn’t much of a difference in some cases. We’re all about equally afraid of ghosts, public speaking, and needles. But there were marked differences on spiritual matters (obviously) and political threats like a nuclear attack. Non-religious Americans were less scared than Catholics and Protestants on just about all those items. 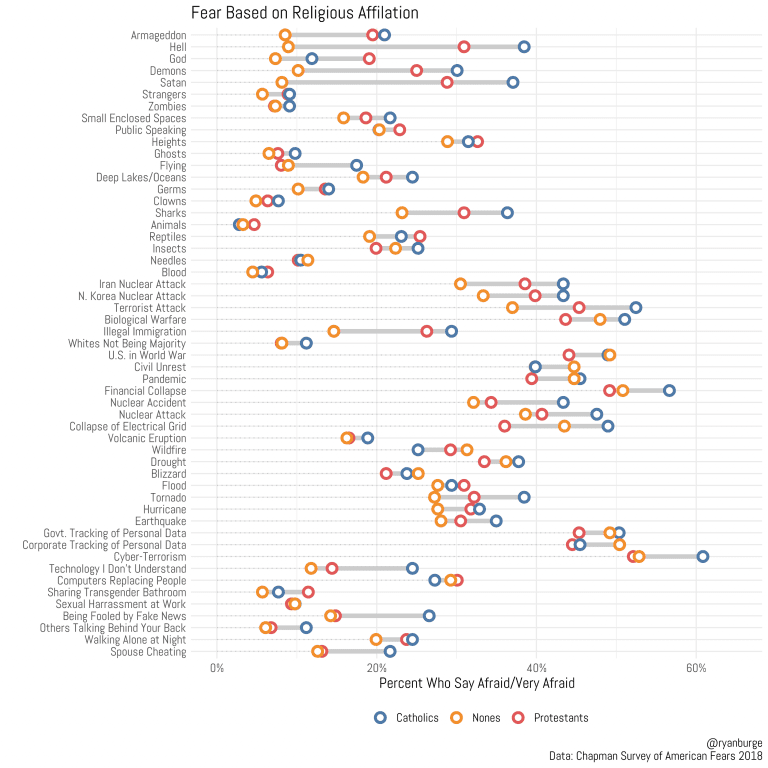 Where is there a large gap between the religious and the non-religious? Clearly, spiritual matters are not a source of fear for many “nones.” The largest gaps appear on items like “Hell” and “Satan.” It’s notable that the overall fear for the nones really doesn’t shift on spiritual items — they are just as afraid of God as they are of demons. It does look like Christians are not that concerned with armageddon, though.

Beyond this, the data paint a clear picture – Catholics are more afraid in almost every scenario compared to Protestants or the religiously unaffiliated. I cannot find a single instance when Catholics are significantly less afraid of something than a “none.” And there are many instances where Catholics show a much higher level of fear than Protestants (Hell, Satan, Technology). For reasons I can’t fully explain, Catholics are a concerned bunch.

Burge also found that regular church-goers were more afraid of everything in general than occasional church visitors… which also doesn’t seem that surprising. When you’re fed a steady diet of fire and brimstone — or even sermons where Hell is treated as a real place — you’re naturally going to be more afraid of things that violate traditional biblical norms or anything that could precipitate an early end to the world.

What were Secular Americans more afraid of than religious people? The things that involve the actions of humans (sometimes made worse by religious beliefs): Being embroiled in a world war. Civil unrest. A pandemic.

Things are bad enough. Let’s not make them worse than they are. 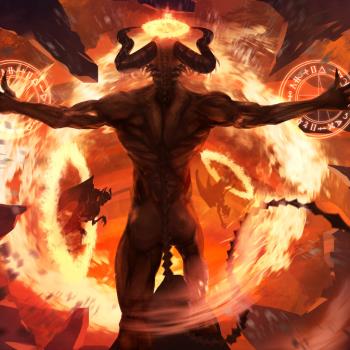 March 18, 2020
What Name Comes to Mind When You Think of Atheism? Many Americans Say... "Satan"
Next Post 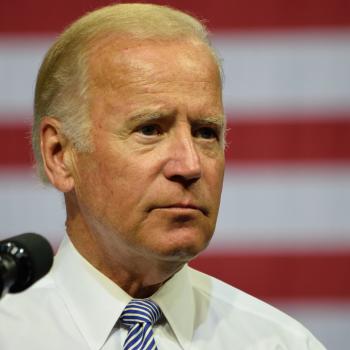