Pastor: We Won’t Close Over COVID-19 Because We’re “Not Gonna Fold to the Fear”

There are still some churches staying open despite the threat that presents to their congregations and the community at large.

Christian Hate-Pastor Greg Locke, who runs Global Vision Bible Church in Mt. Juliet, Tennessee, is one of those leaders who doesn’t have any understanding of the virus, but insists he’s going to keep his church open because that’s what’s best for his community.

… We are going to remain open… we are not going to give in to the chaos. We are not gonna fold to the fear. The Lord has not given us the spirit of fear.

What other churches do, that’s on them. And so we are going to make a decision at Global Vision to remain open.

This isn’t about fear. This isn’t about whether the church has courage or not. This is about protecting the safety of everyone by making sure people aren’t infected with a virus or become vectors without even knowing it. By gathering in one spot, there is a greater likelihood that the whole community — not just people who go to his church — will get infected.

But when you constantly think you’re persecuted, and you think opposing the government — even when it’s right — is a powerful act of defiance, you’re going to make idiotic decisions. If he were just putting his church members in harm’s way, that would be bad enough. Instead, he wants to hurt his entire city and beyond. He rejects science so much, he doesn’t care what medical professionals have to say about our current predicament.

What’s weird is that he already has live-streaming capabilities! There’s nothing stopping him from broadcasting sermons to everyone who wants to watch them. He’s choosing to possibly infect his congregation, or create a situation where they infect everyone they meet.

While he doesn’t run a megachurch by any means, a glimpse inside his church reveals far more people in one place than we should be seeing in the wake of the coronavirus crisis.

In case you’re not familiar with him, Locke is a guy who says transgender people are “perverts,” that the sexual revolution leads to homosexuality and bestiality, and that Planned Parenthood is really really evil. He also doesn’t understand jokes. 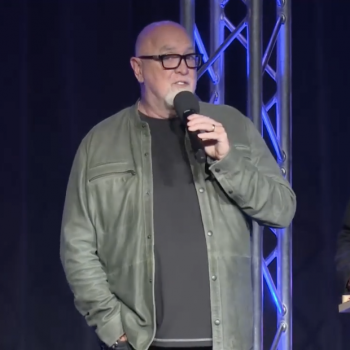 March 17, 2020
A Disgraced Megachurch Pastor from Illinois Already Has a New Gig in California
Next Post 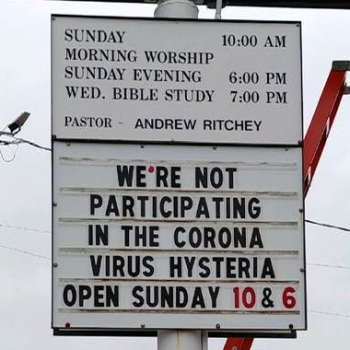 March 18, 2020 Tennessee Church Brags About Holding Services Despite Coronavirus "Hysteria"
Browse Our Archives
What Are Your Thoughts?leave a comment