***Update***: Ken Ham now says both attractions will close on Tuesday (until at least April 2). Good.

While sporting events, concerts, and even church services have been canceled in the wake of the coronavirus outbreak, Ark Encounter and the Creation Museum are remaining open.

What did you expect from people who don’t accept science?

The Creationist sites, overseen by Answers in Genesis, announced that both locations would stay open during the outbreak and that there was nothing to be worried about because the buildings are clean.

Answers in Genesis and its biblical attractions, the Creation Museum and the Ark Encounter, have always placed a very high standard on cleanliness and sanitation at all its facilities and offices, which assists in illness prevention. In fact, in guest surveys, the cleanliness of our attractions is consistently rated as “excellent” by an overwhelming percentage of our guests.

Due to the extensive publicity concerning the COVID-19 (coronavirus) and its effects, we have been taking additional steps and preventive measures, in line with guidance from the Centers for Disease Control and Prevention (CDC) and other health agencies. We use known disinfectants approved by the EPA to deal with this virus and others and routinely sanitize and clean throughout our facilities, including restrooms, kitchens, and transport vehicles such as our public shuttle buses. The sanitization and cleaning occur throughout the day during normal business operations as well as a very thorough cleaning in the evening by trained housekeeping professionals.

Cleanliness isn’t the issue. It’s the gathering of people in one spot, allowing the virus to spread, that we’re all trying to avoid. That’s why the experts are recommending self-quarantine. That’s why you’re not supposed to be going to a bar or restaurant even if you’re young and don’t think you have any symptoms — because you may be a carrier and you could pass the virus along to people whose immune systems aren’t perfect.

It’s not like they’re testing the strangers who enter the attractions. And with more people unable to go to school or work, there’s a chance more families will (unwisely) choose to visit one of those places.

What Ken Ham and his team are doing is irresponsible. It’s putting attendees in danger and compromising public health.

This is why so many people criticize Answers in Genesis. It’s not just their rejection of evolution. That’s philosophically and scientifically wrong but that’s not new. What’s dangerous is developing the mindset that says scientists shouldn’t be trusted.

That’s what these Christians constantly warn their followers. And this outbreak is a perfect example of when their embrace of ignorance could have disastrous consequences that reach far beyond their buildings.

I don’t know if they’re hoping to capitalize on the quarantines since people have nowhere else to go or if they genuinely doubt the seriousness of this virus. Based on their statement about how they’re keeping everything clean, it’s safe to assume they don’t actually understand how the novel coronavirus spreads.

Just to show you how irresponsible this move is, consider Pastor Steven Anderson, the anti-LGBTQ bigot who runs an Independent Fundamentalist Baptist church in Arizona. He released a video yesterday urging people to stay home and watch his livestream because he didn’t want people spreading the virus. (He’s still holding services, which is idiotic, but taking additional precautions.)

I’m not saying he goes far enough. He doesn’t. He’s still keeping his church open, which is a horrible idea. But even he’s taking this pandemic somewhat seriously. And yet Ken Ham isn’t changing a damn thing.

I know I’m constantly asking Answers in Genesis to stop what they’re doing, but in this case, it’s especially important.

Ken, close the attractions and send your staff home (with pay). If you want to spread ignorance, just make some of your online lesson plans available for free. But close the damn buildings so people don’t get hurt.

For once, listen to scientists. 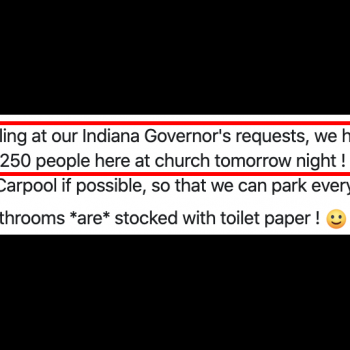 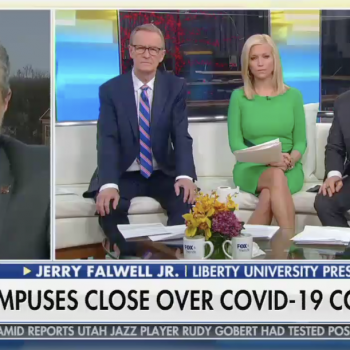 March 15, 2020 Falwell Won't Close Liberty U., Says COVID-19 Is Just an "Attempt to Get Trump"
Browse Our Archives
What Are Your Thoughts?leave a comment