High school students from Wythe County, Virginia are calling for an apology after an elected official took aim at their school’s Gender-Sexuality Alliance Club (GSA) in a Facebook post about the lack of “safe spaces” for Christianity in schools.

County Supervisor Stacy Terry made the post last month and found it spreading through the community at a rapid rate, garnering both support and outrage; to date, it has more than 1,400 comments.

Terry’s post took on the question of whether students in the local high school’s GSA should be allowed to meet during school hours. He argued that a Christian group would not be afforded the same right and that it was therefore unfair to extend the right to the GSA.

Superintendent Scott Jefferies said that all clubs are permitted to meet during the school day for 20 minutes every few weeks on designated club days — including faith-based clubs. Rolland Cook, principal of Rural Retreat High School, even called Terry in to set him straight — so to speak — on the subject.

The whole rant was accompanied by a photograph of one teacher’s door, which boasts a GLSEN “safe space” sticker depicting a rainbow triangle and the words “Espacio Seguro” (“safe space” in Spanish).

My burning question is where is the tolerance and equality for Christianity and God? Over the past couple of years our schools have taken down the prayer plaques at both Spiller Elementary School and Fort Chiswell Middle School. But we have a gay, lesbian, and transgender club in our schools!

The photo on the right is of a classroom in one of our county high schools. It is a gay pride flag. Translated to English it says ‘safe space’. I want to know where the classroom is with a picture of a cross and Bible that says safe space?

The answer, as always, is that Christianity is so deeply accepted in America that it doesn’t require safe spaces. Virtually all of society is a space where Christians can be open about their religious identity without concern, while many LGBTQ people still live in circumstances where concealing basic facts about their lives from most people is a safety measure.

Adding insult to inaccuracy, Terry said that the situation — where LGBTQ children are allowed to have support in schools but Christian groups don’t get special treatment from school administrators — is evidence of “the collapse of humanity.”

There is a prayer club at the high school, but it has to meet before school hours. The gay club meets during normal school hours on club day. When inquiring about this the superintendent explained to me that gay, lesbian, and transgender is a lifestyle, and Christianity is not a lifestyle but a religion.

Folks welcome to the collapse of humanity. We bend over backwards to support anti-biblical values in our school systems while we fight with every last dying breath to keep God out.

Later transcriptions of the post include an edit where Terry admits, “I just heard from the principal and the prayer club also meets on club day,” but the original uncorrected text is still visible on Terry’s Facebook page.

He closes the rant with a barely-veiled threat against schools that continue to support LGBTQ students — a threat that’s doubly concerning in light of Terry’s eagerness to act publicly based solely on his incorrect imaginings about school policy:

In closing I want to assure everyone who voted for me and supported me I am a huge supporter of education, however when it comes time to vote for budgets I will be voting my Christian values and principles.

Terry is ready to hit schools where it hurts: in their coffers. Unfortunately, the ones getting hurt by such a vendetta would be the students.

Fortunately, they’re not interested in taking this quietly and neither is their community. As the offending post gained in notoriety, a Wythe County community group created a Facebook event to organize attendance at Tuesday’s Board of Supervisors meeting. There’s also a petition circulating on Change.org calling for Stacy Terry’s removal from the Board entirely.

Its creator, who authored it under the name Emilee Virginia, calls out the infringement on students’ freedom from religion:

[Terry] seems to believe that 3 Christian-based clubs (yes, 3!) are not enough for the school, and insist that the school takes more action into encouraging Christianity. He also claims that sexualities and gender identities are lifestyles (they are not; people are born who they are) and that Christianity is not (it is a religion, not a lifestyle). He says in this post that this is the collapse of humanity, implying that safe spaces for LGBTQ+ youths, who face the highest rates of suicide per year, are imposing on Christianity.

They also showed up to speak out on Tuesday night:

County Supervisors are responsible for allocating resources within their communities, and Stacy Terry has made it clear that he will not allocate them fairly, giving preference to projects that promote Christianity and denying them to groups whose work he deems counter to “Christian values and principles.”

Emilee Virginia is right. He’s lost the trust of his community. It’s time to step down. 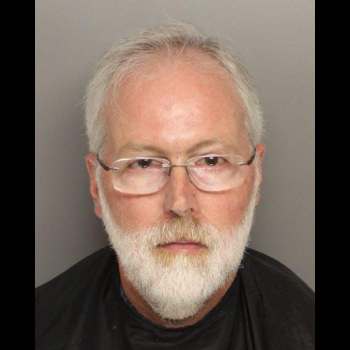 March 12, 2020
A Christian School Botched a Sexual Assault Claim in 2005; Now It's Apologizing
Next Post