Last week, Lynda Slimer, her wife, and their two daughters came home to find that their neighbor had put up a sign in his front yard.

It seems that after a year, Rex Cornwell had only now discovered that they were lesbians. And since he’s the pastor at Bossier Church of Christ, he had a message for them: 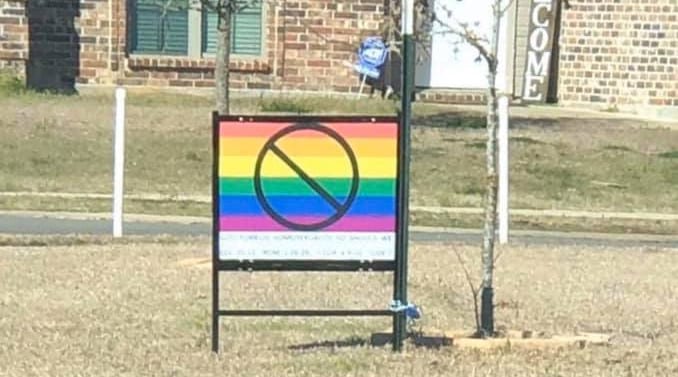 It’s hard to see but there are words under that image saying, “God forbids homosexuality, so should we,” along with specific Bible verses that conservative Christians use to clobber gay people with.

Slimer posted a picture of that sign on Facebook, and it generated all kinds of support (as you’d hope). It didn’t hurt that she herself is Christian:

… [The pastor and his wife] told us if we ever need anything to just come knock on their door. All thrown out the window because they realized that we are wives and not roommates. This is not a representation of God. Jesus would not do this.

Jesus WAS in my neighborhood today though. Jesus was there in all of my neighbors that were upset and showed their support. Jesus was there in the policemen who showed up and asked them to remove the sign, knowing that all they could do was ask. Jesus showed up in the form of our family and friends that have loved on us today. For each and every one of you we are SO Thankful!

Spiritual stuff aside, it’s a lovely sentiment. But she’s right to point out that the police could only ask the pastor to remove the sign. It’s his property. He’s allowed to keep it up. Naturally, he refused to take it down. He’s a proud Christian bigot, dammit!

It doesn’t mean this saga has ended. Last weekend, supporters of Slimer’s family showed up to stage a counter-protest.

More than two dozen people showed up to gather across the street from the church with signs that read, “Spread love not hate, ” “God is love,” and “Judge not lest ye be judged.” Some carried rainbow flags or wore rainbow-themed clothing.

Cornwell isn’t budging. He has since put up a second sign saying “Smile at the camera,” perhaps meant to dissuade counter-protesters from demonstrating against his hate.

If there’s any positive takeaway from this, it’s that this guy may be full of hate, but he’s very much in the minority. The number of people supporting the same-sex couple is overwhelming and several comment threads about this controversy are no different.

When someone’s Christian faith inspires him to hate his neighbor (even if he calls it “love”), no one is eager to get on board with him or his religion.

(via Back2Stonewall. Thanks to Jim for the link) 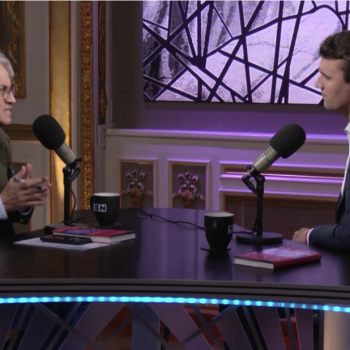 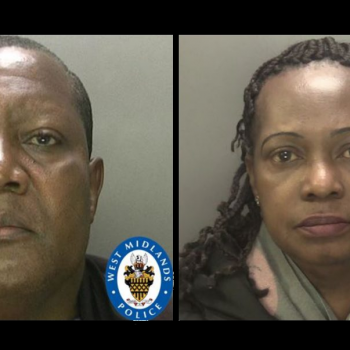