As a Tornado Destroyed a Catholic Church in TN, a Priest Saved a Communion Wafer March 6, 2020 Hemant Mehta

As a Tornado Destroyed a Catholic Church in TN, a Priest Saved a Communion Wafer

Approximately 25 people have died due to a tornado hitting Tennessee. It even hit the Church of the Assumption in Nashville. The building didn’t make it.

Mark Cassman, a parishioner at Church of the Assumption, shared images of the damage on his Facebook page. His pictures show that several of the church’s stained glass windows were partially destroyed in the storm, and as well as damage caused to the building by rocks thrown by the tornado.

“Mass cannot be held here for a while,” said Cassman. “It’s bad.”

The parish’s high altar sustained minimal damage in the storm, although the area of the church located near the side altar was littered with debris.

But don’t worry. The priest salvaged the only thing that mattered even as the building appeared on the verge of collapse.

Despite the dark, the possibility of more tornadoes, and the danger of the bell tower falling through the roof, [Fr. S. Bede] Price went inside the church to rescue the Blessed Sacrament reserved in the tabernacle.

“Father was worried that the church might collapse, and so he removed the Blessed Sacrament,” a spokesperson for the Church of the Assumption told LifeSiteNews.

He saved a cracker.

The building was about to come down and he thought the wise move was retrieving a cracker.

Whenever you do that thought experiment about what you would save if your home was on fire, I promise you no one in their right mind would elevate food to the top of the list, but for this Catholic leader, a mythical piece of Jesus needed protection from God’s fury. Or something like that.

Only with religion would you risk life and limb for a wafer. The kind of wafer you can just buy more of at a store.

Our lady of Assumption Prayer: Father in heaven, all creation rightly gives you praise, for all life and holiness come from you. In the plan of your wisdom she bore the Christ in her womb was raised body and soul in glory to be with him in heaven. May we follow her example in reflecting your holiness and join in her hymn of endless love and praise. We ask this through Jesus Christ our Lord. Amen. . . Hi all! We will try our best to update you all on the status of Assumption. We ask you to not call or email the parish office as they are bombarded with urgent matters. Instead please pray for Fr. Price and all those having to figure out what is next. We are still unsure of the exact damage but here are some pictures so far. Praise God Father Price was able to safely remove Jesus from the tabernacle even during a violent tornado. Let us remain hopeful for Jesus always rises again. Pax Christi.

I’m glad he’s not injured. But what he did was neither a miracle nor an act of bravery. It’s just idiotic. Had he suffered, he would be receiving a Darwin Award.

Meanwhile — and I repeat — more than two dozen people are dead because of this disaster, which the priest presumably believes God controls.

(Featured image via Facebook. Thanks to Kerri for the link) 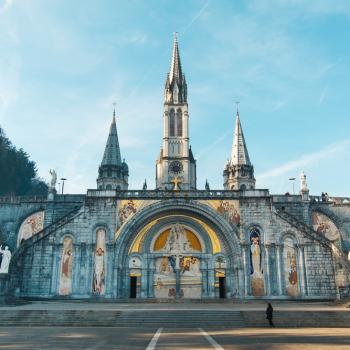 March 6, 2020 French Catholic Shrine’s “Healing” Waters Shut Down Due To Coronavirus
Browse Our Archives
What Are Your Thoughts?leave a comment