Despite Tornado-Related Deaths in Tennessee, This Bible Survived… So Yay? March 5, 2020 Hemant Mehta

Despite Tornado-Related Deaths in Tennessee, This Bible Survived… So Yay?

In Putnam County, Tennessee, 18 people have already died as a result of the tornadoes hitting the middle part of the state.

But don’t worry. Some workers found a few Bibles that are still readable. Therefore God loves us.

While searching and helping sort through the debris in Putnam County, Officer Denton with the Sparta Police Department stumbled across something that was nearly untouched — a Bible.

Officer Denton said, “There’s not a page gone in this Bible. It’s a family Bible. We’d like to find out whose family Bible it was.

Crews said they are collecting items like that Bible and will try to get it back to the rightful owners. Officials said crews found two other Bibles, also untouched.

It’s not a rare Bible. It’s not even a Bible anyone was looking for. It’s just a random giant Bible that’s supposed to represent… something.

If God wanted to send a sign, He could’ve blocked the tornadoes. Sending a book as a parting gift shouldn’t make anyone feel better, and it’s downright embarrassing that journalists at WVLT-TV are treating it as a real news story. (The headline for that video, by the way, is “Bible survives violent tornado,” as if there’s something magical about it.)

As I’ve said before, when someone destroys your home and leaves a business card, you don’t call back. 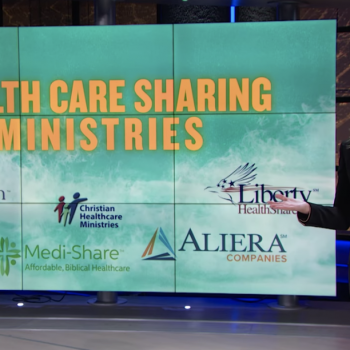