Pastor: We’ll Be “Minimally Affected by Coronavirus” Because Trump is Pro-Israel

Right-wing pastor Jonathan Shuttlesworth once said he would defend Donald Trump even if he were “found running a dog-fighting ring on Princess Diana’s grave — on Mother Teresa’s grave — while having affairs with women.”

So it’s not surprising he’s also defending Trump’s handling of the coronavirus outbreak.

Shuttlesworth said Americans have nothing to fear because Trump is sufficiently pro-Israel. Therefore… immunity?

But only if you’re in a red state.

“If God is for you, who can be against you?” he asked. “Read the Bible. A nation doesn’t have to be run by a perfect man for God to give goodness to a nation. ‘I will bless those who bless you, and I will curse those who curse you.’ Even Trump’s critics would have to say that he honors Israel. Now they can say, ‘He just does it to appeal to the Christian [base].’”

“They can say whatever they want, he honored Israel. Obama honored the enemies of Israel; Trump honors Israel, and it’s a massive difference. And because of that, I predict America will be minimally affected by coronavirus,” Shuttlesworth continued.

Who knew the virus had strong opinions on our foreign policy with Israel?

Shuttlesworth then added “a little caveat” to his prediction to claim that if America is affected by the virus, it will impact liberal states that “have chosen to give God the middle finger.”

I can’t believe this needs to be said, but viruses don’t care about your religion or your politics, and they don’t obey manmade borders. In this particular case, the people who are most at risk include those who already have poor health and/or don’t practice good hygiene. (If God was so angered by Obama supposedly honoring Israel’s enemies, why not send him the coronavirus?)

Christians today are diagnosed with diseases every year — at the same rates as everybody else. So believing in the same God as Shuttlesworth makes you about as immune from disease as taking medical advice from Jenny McCarthy or Gwyneth Paltrow.

The strain of coronavirus we’re seeing isn’t God’s punishment for anything. And if it was, you would think He’d be far more upset about this administration separating refugee kids from their parents and placing them in cages than our foreign policy. 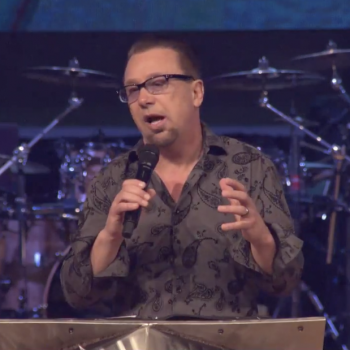 March 3, 2020
Trump Campaign Will Hold Event at "Gay Is Not Okay" Evangelical Church in Ohio
Next Post