Who among us hasn’t sat through cringe-inducing ice-breaker activities before a guest presentation?

But for 11th grade students at Harding Charter Preparatory High School in Oklahoma City, the experience went from awkward to outright offensive when an Oklahoma Christian University recruiter had students line up according to skin color — darkest to lightest — and then according to hair texture, “nappiest hair in the back and straighter hair in the front.” 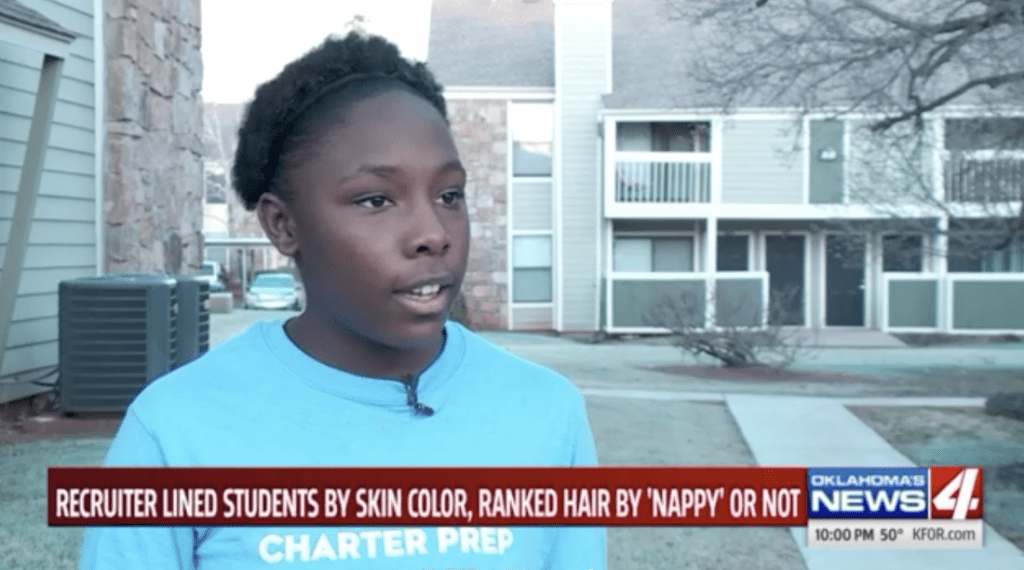 The object of the game was to learn “who is going to line up the fastest,” student Rio Brown explained to reporters at local media outlet KFOR News 4.

In that sense, it resembled a common ice-breaker game where participants order themselves by height, first initial, or date of birth.

But ranking students according to racial features caused deep discomfort to staff and students alike. Said Brown, “Teachers left; they were crying and they were offended. Their faces just looked disgusted. I know they had a talk with him after, like, ‘That’s not okay’.”

It’s possible something like this could’ve occurred to make a point about privilege… but that was never offered as a justification and, even if it was, it’d be a horrible way to make the point.

The recruiter who hosted the activity, Cedric Sunray, fancies himself quite the racially conscious activist, calling himself “an advocate and ally” to the African American community. In a response he penned for the Church of Christ news site The Christian Chronicle, Sunray touted his work “related to dismantling racism” and his history as a teacher at “predominantly black high schools” in the area.

So how did such a (purportedly) racially conscious educator make such an obvious blunder?

My teaching is unorthodox, humorous, challenging, and, most importantly, necessary. My Black and non-Black students, their families, my colleagues and others will attest to this and be quick to support my character, intention, and more typical results.

Nothing I spoke at Harding Charter Preparatory during an initial ‘ice-breaker’ session had any intention of promoting a racist agenda. My presentations are the opposite. They are intended to take a hard look at issues such as this. The most dangerous things in education are those we are unwilling to discuss. And sometimes when those discussions occur, misunderstandings and even anger can be the result.

Having done 87 of these exact presentations this year prior to this one, my only regret in reflection is not providing myself enough time to fully explain the purpose as I have been able to at other presentations, as some of the students and staff from what I understand felt like it was not explained thoroughly.

That’s a lot of words to say “anyone who was offended just didn’t get it” and shift blame to the people objecting for being unwilling to “take a hard look at issues” surrounding race. (He never explained in that essay what, exactly, he was trying to achieve.)

It’s all an easy accusation to toss around, I guess, if society looks at you and sees a white man.

According to the University of Kansas, where he completed a Master of Indigenous Studies, Sunray is not a white man; he is an “enrolled member of the MOWA Band of Choctaw Indians.” He describes himself as having a “white racial phenotype,” though — in other words, he’s white-looking.

That ability to pass as white, to decide when and whether to disclose his racial identity, makes his experience markedly different from that of many of the students and teachers who objected to his ice-breaker exercise.

Employees at Oklahoma Christian University say this isn’t the first time Sunray has found himself in trouble for hosting this sort of activity. At the time of his dismissal, he was already under investigation for asking another group of high-school students (attending the school’s “Future Teachers Day”) to arrange themselves by skin tone and lip width.

This time, though, it was in the media.

I’m embarrassed, and I’m ashamed, and I’m mad about what happened. I’m very, very sorry… We’ve got to do better.

But the school’s assistant dean of students, Gary Jones, Jr. — an OCU alumnus — challenged deSteiguer to “come up with something more tangible than ‘we’ve got to do better’.”

This personally hurts. I’ve devoted the last eight or nine years of my life to coming back to the place that was uncomfortable to me as a student to make it better… to make sure no kid experiences what I experienced.

As a start, Oklahoma Christian University has wasted no time in firing Sunray from his position, issuing a statement to that effect:

The OC admissions counselor who visited Harding Charter Preparatory Academy on Monday is no longer an Oklahoma Christian University employee. OC admissions leadership did not approve the inappropriate activity in advance and has communicated closely with Harding administration since the visit. Admissions staff are scheduled to visit the academy Monday to apologize to Harding students and staff on behalf of the University.

But the damage is done, at least for the coming year’s crop of freshmen: It’s hard to imagine too many of the students from Harding Charter Prep pursuing degrees at Oklahoma Christian University now.

March 3, 2020
Cindy Jacobs: God Told Me to Hold a "Global Day of Prayer" Against Coronavirus
Next Post 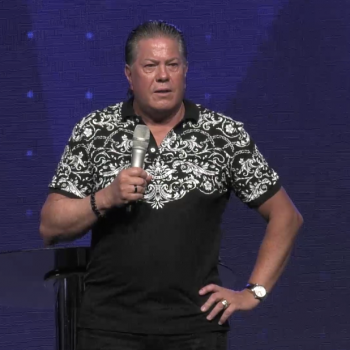