Dave Daubenmire: Buttigieg Should Be in Jail for Showing Compassion to a Gay Boy February 25, 2020 Hemant Mehta

Dave Daubenmire: Buttigieg Should Be in Jail for Showing Compassion to a Gay Boy

Dave Daubenmire is the latest Christian Right activist to pile on after Democrat Pete Buttigieg answered a question from a nine-year-old boy about how he could be brave when it came to telling people he’s gay. (Buttigieg said the kid, just by asking the question, didn’t need any advice from him on bravery.)

Daubenmire made the comments on his “Pass The Salt Live” program yesterday, saying that Buttigieg should be punished for “contributing to the delinquency of a minor.”

“Fifty years ago, they would have thrown Buttfudge in jail for even bringing it up and talking about it in front of a young kid,” Daubenmire bellowed. “What ever happened to shame? Why didn’t his mommy put him in a headlock and drag him off the court? Where’s his daddy?”

One of the participants in Daubenmire’s show then piped up to say that someone in the audience should have demanded that the sheriff remove Buttigieg from the stage for “violating the moral code of our lives,” while another declared that the boy who asked the question “was probably molested by either mom or dad or some relative.”

For his part, Daubenmire couldn’t believe that we live in a society where “a possible presidential candidate [is] contributing to the delinquency of a minor.”

Remember this exchange whenever Christians say they’re fine with homosexuality, just not homosexual acts. That’s not true. They can’t handle gay people, period. And they’re delusional about when people realize their sexual orientation.

Daubenmire and his guests are far more upset about Buttigieg treating a gay child with compassion that anything Donald Trump has done to harm children, whether it’s separating refugee kids from their parents or serving as the worst role model in American history.

These Christians don’t give a damn. Their bigotry overrules any semblance of common sense. 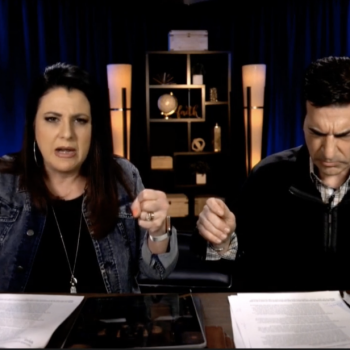