This is a guest post by Andrew Seidel. He is an attorney for the Freedom From Religion Foundation and the author of The Founding Myth: Why Christian Nationalism is Un-American.

Iowa legislators have proposed nine bills out of the Project Blitz handbook. Nine bills. That’s more than any other state. Christian nationalism is on the march in the Iowa Capitol. 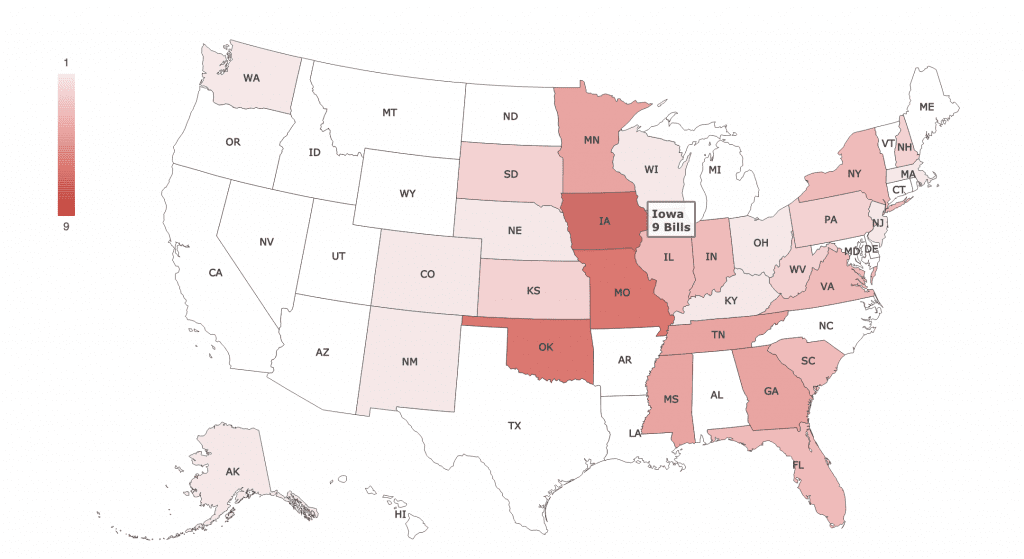 Iowa’s Blitz bills include some that were proposed in the last session and appear to be languishing, but not technically dead. Three of the nine bills are meant to smuggle Christian Nationalism into Iowa schools. HF 231 will use public schools to teach the bible, a recipe for litigation and teachers violating students’ rights. Other bills deal with school decor, not student decorum — legislators are actually spending time decking the halls of every Iowa public school. HF 444 would “conspicuously” emblazon the Christian nationalist’s favorite phrase, “In God We Trust,” while SF 2101 would require displaying the second sentence of the Declaration of Independence — not the first sentence and certainly not the whole document, just the “endowed by their Creator” line.

The remaining six bills — HF 2273, HF 258, SF 240, SF 2193/SF 2194, and SF 508 — are the same in their essentials. They would legalize discrimination by conservative Christians against LGBTQ citizens, non-Christians, and even the wrong kind of Christian. God would be a license to discriminate.

Legislators are lifting the text of these bills verbatim from the Project Blitz handbook — basically ripping out pages and proposing them. These laws don’t serve Iowans. They serve Christian nationalism. Healthcare, jobs, the economy? The legislators proposing these laws care more about using the power of the government — the power of We the People — to promote their personal religion. Apparently, they believe in big government, a government big enough to impose their religion on other people.

But that understanding of our government is backward. The United States of America invented the separation of state and church. It’s an American original. The idea was born in the Enlightenment, but it was first implemented in the American Experiment. This is one of our country’s unique contributions to humanity. Not only that, it guarantees that other foundational American value: religious freedom. There is no freedom of religion without a government that is free from religion.

These bills use the machinery of the state to impose Christian Nationalism on Iowa. They are fundamentally un-American.

February 21, 2020
Michael Brown, Who Fears a Gay-Married President, Responded to Our Criticism
Next Post