In a disappointing, but widely expected, ruling from the Eleventh Circuit Court of Appeals yesterday, a Giant Christian Cross in a public park in Pensacola, Florida was declared constitutional.

It comes after a long legal journey that included a stop at the Supreme Court.

This case centers around a Giant Cross in Pensacola’s Bayview Park. In 2015, the American Humanist Association’s Appignani Humanist Legal Center and the Freedom From Religion Foundation separately sent letters to city officials saying the Cross had to go, based on information that its origins were purely religious.

“By prominently displaying a Christian cross at Bayview, a public park, the city is promoting Christianity over all other religions and religion over non-religion,” said Monica Miller, an attorney with the Appignani Humanist Legal Center…

Pensacola officials never responded to them. So in May of 2016, the two groups filed a joint lawsuit against the city, saying the Bayview Cross “sends a clear and exclusionary message of government preference for Christianity over all other religions.”

In June of 2017, a U.S. District Court judge agreed with them, saying it was unconstitutional and had to come down within 30 days. (Hallelujah!)

But even though the city of Pensacola — i.e. the taxpayers — had already ponied up more than $130,000 to fight this battle, city officials appealed the decision. They had the help of 14 attorneys general from across the country, all of whom said the Giant Christian Cross should be considered a totally secular monument.

Their argument was that we use crosses to honor heroes and create makeshift memorials when people die, therefore it’s not always about promoting Christianity. Furthermore, when the Giant Christian Cross has been up for 75 years without a challenge, we should be able to assume it reflects “cultural heritage” rather than religion. (They glossed over how the mayor once said of this display that there will “always [be] a place for religion in the public square.”)

It didn’t work. In September of 2017, the 11th Circuit U.S. Court of Appeals unanimously affirmed the earlier decision because of course the damn cross has to come down.

But they didn’t make that decision happily. In fact, the judges said they were “bound by existing Circuit precedent” and “constrained to affirm.” In other words, they didn’t want the monument to come down, but the law said it had to come down, and HEY SUPREME COURT, MAYBE YOU SHOULD LOOK AT THIS.

… our hands are tied. Absent en banc reconsideration or Supreme Court reversal, we are constrained to affirm the district court’s order requiring removal of the Bayview Park cross.

Two of the judges wrote concurrences that urged the Supreme Court to allow religious monuments at taxpayer expense if they have “historical” value. One judge even said SCOTUS needed to reverse precedent on this because their “Establishment Clause jurisprudence is, to use a technical legal term of art, a hot mess.” That judge, Kevin Newsom (nominated for his seat by Donald Trump) elaborated further, laying out five things he knew for sure:

1. That the Supreme Court’s Establishment Clause jurisprudence is a wreck;

2. That as a lower court, we are nonetheless obliged to do our best to discern and apply it;

3. That in the last decade, the Supreme Court has increasingly emphasized the centrality of history and tradition to proper Establishment Clause analysis, culminating in its statement in Greece that “the Establishment Clause must be interpreted ‘by reference to historical practices and understandings’”…

4. That there is a robust history — dating back more than a century, to before the time of the adoption of the Fourteenth Amendment, by which the First Amendment would eventually be applied to state and local governments — of cities, states, and even the federal government erecting and maintaining cross monuments on public land; and

5. That our now-35-year-old decision in Rabun — which invalidated a cross situated in a state park and, in so doing, summarily dismissed “historical acceptance” as a reliable guide for Establishment Clause cases — is irreconcilable with intervening Supreme Court precedent.

In short, he wanted Christian symbols allowed on government property — presumably including Ten Commandments monuments outside schools and city halls and crosses under the guise of war memorials — if there’s an argument to be made that they’re “historical” in nature (even if religion had something to do with why they were put up in the first place).

As we all know by now, the Supreme Court granted that wish last June. Justice Samuel Alito, writing for the majority, said a different Giant Christian Cross, in Maryland, was legal precisely because of its historical nature. Even if it was once purely Christian, the passage of time had made it “indisputably secular”… somehow.

It was such a bizarre argument that even Justice Neil Gorsuch (in a concurrence, mind you) questioned the logic of that, asking, “How old must a monument, symbol, or practice be to qualify for this new presumption?” (We don’t know.)

In any case, the Supreme Court had spoken. And their decision cast the Pensacola one in a new light. About a week after that ruling, the Court decided to toss out the Eleventh Circuit’s ruling and told those same judges to give it another shot in light of what they had said about the Bladensburg Cross.

In other words, now that there’s new precedent on this issue, will it change the earlier decision?

The Supreme Court basically gave the Eleventh Circuit judges all the tools they needed to allow the Pensacola Cross to remain in place simply by virtue of its age.

So it’s not surprising that the Eleventh Circuit unanimously has now ruled that the Pensacola Cross is constitutional.

Applying the new Supreme Court ruling to the Bayview Park cross case, a three-judge panel wrote a 42-page opinion on the “Pensacola Cross Case 2.0” that concluded “the cross does not offend the Constitution.”

“Removal of the Bayview Park cross at this point — more than 75 years after its original erection and more than 50 years after its replacement with the current concrete version — could well, in the Supreme Court’s words, ‘strike many as aggressively hostile to religion,’ ” the opinion said.

While they cited the history of that cross, the decision goes even further than what the Supreme Court said. SCOTUS was talking about a war memorial in the shape of a cross. The Pensacola Cross is just a straight up homage to Christianity. But the Eleventh Circuit thinks government promotion of Christianity is fine as long as it’s been happening for a long time.

Even beyond their decision, two of the three judges wrote a separate concurrence that questioned why the plaintiffs had standing at all to bring forth this case just because they were “offended,” “affronted” or “excluded.” All of them live in the community. If they can’t sue over what their government is doing, it’s hard to imagine how anyone could.

The American Humanist Association called this a “devastating blow to the Establishment Clause.”

“It is troubling to see the court attack the principle of church-state separation that was held dear by our Founders,” said Roy Speckhardt, the Executive Director of the American Humanist Association. “Today’s decision is part of the religious right’s ongoing crusade to privilege Christianity at the expense of true religious freedom for all.”

The AHA is considering a further appeal.

FFRF agreed with the sentiment:

“It is not ‘hostile to religion’ to uphold government neutrality over religion. Bayview Park is not a Christian park, Pensacola is not a Christian city and the United States is not a Christian nation,” says FFRF Co-President Annie Laurie Gaylor. “Tax-exempt church property abounds where this cross belongs. Its presence in a city park sends a message that Christian citizens are insiders, and the rest of us are outsiders — and that’s an alarming message.”

It really is a disturbing ruling. But this is what happens when conservative judges take over the federal system. Christianity becomes the de facto religion for the nation. And because Christians broke the law decades ago, our legal system now says they should be able to get away with it in the present day. 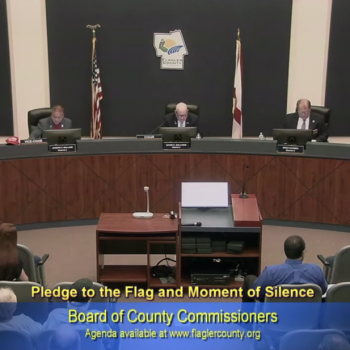 February 20, 2020 Harrisburg (PA) Catholic Diocese Declares Bankruptcy After Sex Abuse Lawsuits
Browse Our Archives
What Are Your Thoughts?leave a comment