Over the weekend, the National Association of Christian Lawmakers, the creation of Arkansas’ Christian Nationalist State Sen. Jason Rapert, did something idiotic on the internet.

They put up a poll on Twitter asking people if they believed “America would be better off if more Christians served in elected office.”

There were only two things that could happen. The first was what they wanted: They were hoping their followers — presumably Christians — would respond in the affirmative, creating the false notion that lots of people want more Christians in office.

Instead, the second thing happened: Plenty of other people saw the poll and skewed it in the other direction almost immediately.

Hilarious. And entirely predictable if you know anything about the internet.

Also predictable is how the Christian group is now blaming everyone but themselves for what happened:

We are aware the Satanists and Atheists have decided to pile on this poll. While you are here know this – God loves everyone and forgives all who ask Him. Salvation is available only through His Son Jesus Christ. John 3:16

Right. Satanists and atheists. As if no one else could possibly be against Christians who use the government to advance their right-wing religious agenda.

Another tweet referred to the comments mocking the poll as examples of “religious persecution and anti-Christian bigotry.”

View the comments on this thread to see what religious persecution and anti-Christian bigotry looks like in America. Satanists and Atheists piled on this poll and have begun leaving vile messages as well. @NBCNews @ABC @seanhannity @FoxNews @CBSNews @LifeSite @CBNNews https://t.co/fQ3sYFMqzD

Imagine how little persecution you must actually receive when a Twitter comment is the best example of bigotry you can find.

The entire group is as useless as that poll. There are plenty of Christians in office — nearly 90% of the current Congress — and people like Rapert act like non-Christians have no business in elected office. They’re the problem, not the solution.

The fact that they released a poll in order to pretend that people want more Christians in power is just an example of how pointless their mission is. A real survey wouldn’t give them the data they want. So they tried to fake something. It backfired. Now they’re whining about it. 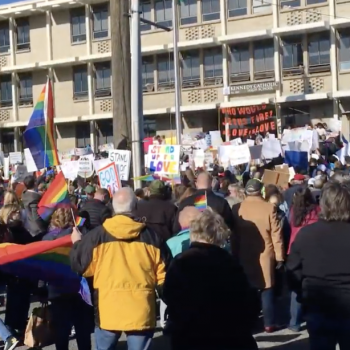