Professional Jew-hater Rick Wiles has a colorful history of blaming the Jews for every political move he doesn’t like. This week, he hosted two speakers on his TruNews program who claimed that Zionists are apparently trying to make all humans androgynous in order to take over the world… or something to that effect:

Featured on the program were Messianic Jews Steve and Jana Ben-Nun of Israeli News Live, who claimed that the transgender rights movement is a Zionist plot to make all of humanity androgynous.

“They want to rule the world,” Jana Ben-Nun said of the Jews. “They want to get Gentile riches, and they want to rule the Gentiles. They don’t consider Gentiles [to be] fully human beings. In fact, as an end game, they have this strange doctrine: the Adam Kadmon doctrine. Adam Kadmon was, originally, according to the Zohar and the Talmud, he was androgynous; Adam, he wasn’t male or female, he was male and female in one body, and this is why you see this transgender agenda today.”

“… They want to bring it to the original. Who was original? Adam. He was androgynous. So now they’re putting specific things in food, in drink, and basically their end game is to make humans on Earth that will survive — whatever it is they are bringing — androgynous.”

It’s true that the Talmud addresses gender fluidity. But at no point do the speakers give any citation for this as a means to “take over the world,” which has never been a collective Jewish goal. If anything, Jews have maintained a goal of simply wanting to live freely in this world, left alone by gentiles who seek to persecute them (or worse).

The claims that these guest speakers are making — that Jews are supposedly putting things in people’s drinks to make them androgynous, as if that’s even possible — are no different than the equally false claims of the Middle Ages, when Jews were accused of causing the Plague by poisoning the wells.

We all know how that ended up. Radical anti-Semites listening to this garbage will only be encouraged in their hate, which can embolden them to commit violence. 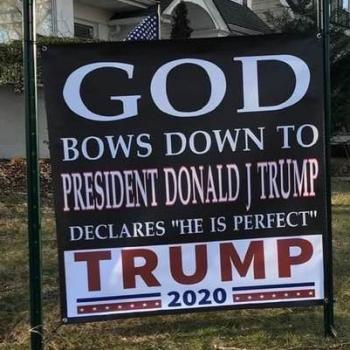 February 17, 2020
This "God Bows Down to President Donald Trump" Sign Is Meant to Be a Joke
Next Post

February 18, 2020 Trump's "Spiritual Adviser" Tells Followers to Pay Her Church Before Their Bills
Browse Our Archives
What Are Your Thoughts?leave a comment