The Percentage of Religious “Nones” May Have Finally Hit Its Peak February 10, 2020 Hemant Mehta

The Percentage of Religious “Nones” May Have Finally Hit Its Peak

For more than a decade now, we’ve been seeing stories about how younger people were becoming increasingly non-religious. Each new generation seemed to include a larger segment of “Nones.”

That may finally be changing.

It’s not that people are suddenly finding God or anything, but the percentage of Nones may be stagnating or decreasing. That’s according to Paul A. Djupe and Ryan P. Burge who are masters of finding nuggets of religious gold out of available data.

By looking at the General Social Survey, they found that Generation Z (born after 1995) is somewhat more religious than Millennials. Or at least less less religious. Notice below that younger generations are all higher up on the chart… but there’s a change when it comes to Gen Z. 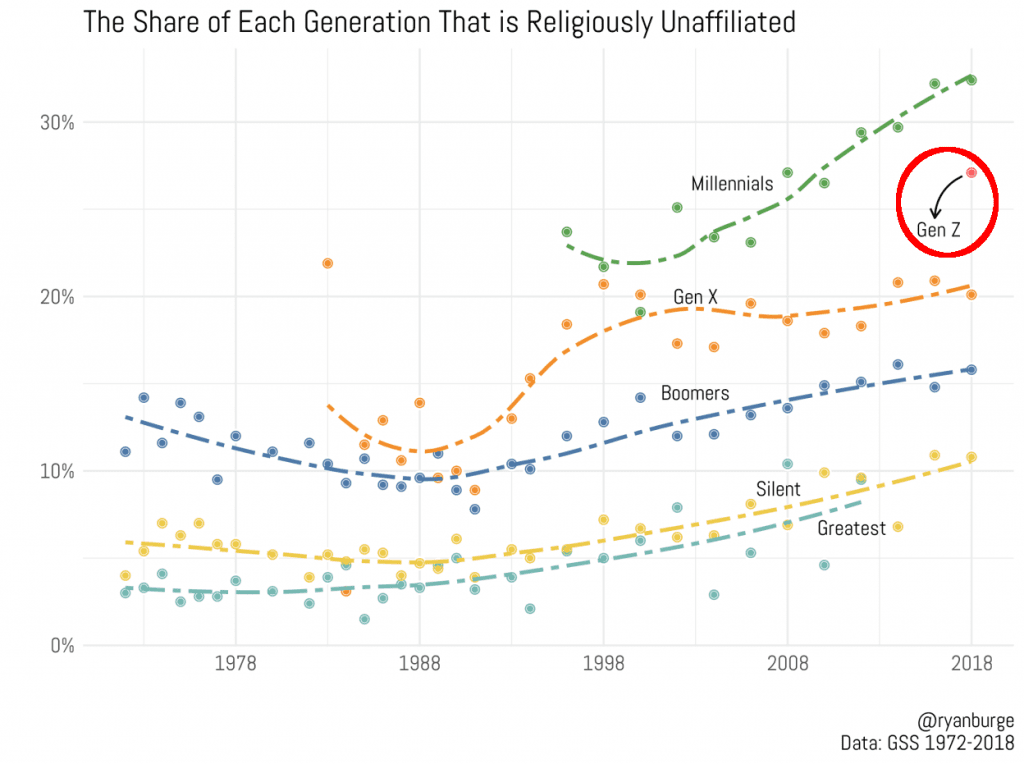 Other data sets show that, even if the percentage of Nones hasn’t dropped, the rate of growth has certainly slowed.

The lesson is clear — the rate has drastically increased with each generation through to Millennials and has since slowed so that Gen Z is so far no more unaffiliated than Millennials. In 2018, 42.8% of Millennials were nones (combining atheists, agnostics, and those ‘nothing in particular’), while 42.9% of Gen Zers were nones.

If this is all accurate, why might it be happening? It’s too early to point to anything specific, though keep in mind that a drop in Nones doesn’t mean a rise in any one particular religious group. It’s not like atheists are becoming evangelicals. But it’s something we’ll be seeing more reporting about in the future.