We already know that Charisma, the Christian magazine, regularly publishes faith-based nonsense. Like when they warned readers about a “demonic squid” or an apocalyptic asteroid.

The fact that just about all (if not all) of their writers are supporters of Donald Trump is a given. But now the magazine’s CEO Steve Strang says Trump has “become our champion” even if he’s not perfect.

Talk about understatement of the century…

“In a way, God allows all leaders, good and bad, but he has raised up people in history at crucial times. You know, I believe in prayer. And there are a lot of people who are praying that our country is going in the wrong direction, almost like we’re in a crisis. And Donald Trump, for all his faults, and even though he’s not exactly a choir boy, he’s become our champion, and that’s what we needed,” Strang said.

The majority of Americans weren’t asking for, much less expecting, a “choir boy” president. Minimally competent would be just fine right now. More to the point, Trump’s not just “not exactly a choir boy.” He’s a corruption machine who’s bilking the federal coffers while putting our reputation, our troops, and our safety in harm’s way through his careless decisions.

Overturning healthy meal prerogatives for public schools out of spite for the Obamas? Back out of the Paris Agreement, along with every initiative to keep water and air clean and safe? Be an immature asshole on Twitter? Check, check, and check.

But, you know, he’s nominating one conservative justice after another. The Republican Party has no problem watching other people suffer if they can hijack the courts for generations.

January 28, 2020
Priest Who Tied Up, Blindfolded, and Threw Boy in Closet Gets 60 Days in Jail
Next Post 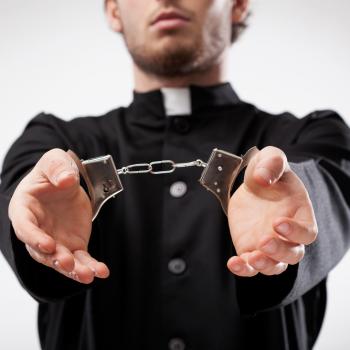 January 28, 2020 ProPublica Created a Searchable Database of Credibly Accused Predator Priests
Browse Our Archives
What Are Your Thoughts?leave a comment