Did you know that Hillary Clinton, a practicing Methodist, planned to put Christians in concentration camps if she got elected?

It’s true in the Bizarro World inhabited by right-wing commentator Rick Wiles, who took a comment Clinton made about the joy of “camps for adults” — like actual camps — and twisted it into something incomprehensible.

“The queen of sleaze, Hillary Clinton, she jokingly told her supporters one day, ‘What we need in America are fun camps for adults,’” Wiles said. “If you’re wearing the uniform, you may be sadistic and have a lot of fun, but if you’re a prisoner, you may not think it’s too funny.”

“Hillary told her supporters, ‘Maybe you will run the camps,’” he continued. “Just think about what she was saying. All the leftists there knew what she was hinting about. Re-education camps. Concentration camps. And you might have a job there. She was sending the signal of what they could anticipate if she got in the White House.”

This is just another reason Democrats shouldn’t bother trying to cater their language to mollify conservatives. Anything they say or do will always be taken out of context by dishonest people seeking to cast them in the worst possible light. All the more reason to push for the most progressive possible agenda they can without worrying about how conservatives will spin it. The most innocuous statements will be treated as a subtle call for genocide.

It’s also ironic that Wiles is so offended by concentration camps given that he has no problem with our Republican-run government creating them for refugee kids. Good luck searching for any clips of him speaking out against those, though.

January 17, 2020
Kanye West to Appear at Rally of Christians Hoping to Spark a "Great Awakening"
Next Post 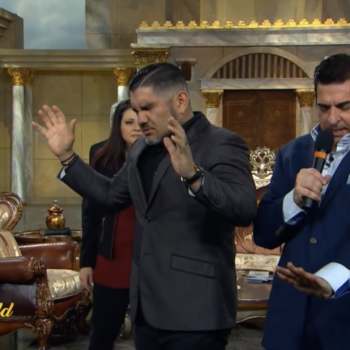 January 17, 2020 Pastor Slaps Man's Chest and Speaks Gibberish in Bizarre "Faith Healing" Clip
Browse Our Archives
What Are Your Thoughts?leave a comment