As we’ve mentioned before, officials in Scottsdale, Arizona are in the process of throwing away roughly $130,000 of taxpayer money in order to block Satanists from delivering an invocation at city council meetings. There’s no reason to think they’ll win this battle.

But while they’re still blocking Satanists from speaking, Luke Douglas of the Humanist Society of Greater Phoenix was given the green light, and he made the most of it, delivering an invocation that included some positive words about Lucifer.

Rather than closing our eyes or bowing our heads, it is customary in a Humanist invocation to keep one’s eyes open. Look around at your neighbors, your colleagues, your fellow Human beings. Humanists have no holy books, only the literature and philosophy of humans who have gone before, whose ideas stand or fall on their own merit. My reading for reflection today is from the twentieth century activist Saul Alinsky:

“Lest we forget at least an over-the-shoulder acknowledgement to the very first radical: from all our legends, mythology, and history (and who is to know where mythology leaves off and history begins, or which is which), the first radical known to man who rebelled against the establishment and did it so effectively that he at least won his own kingdom — Lucifer.”

This character, to some the personification of evil, and to others a poignant metaphor for freethought and the importance of challenging traditional authority, may divide people of different faiths, but no matter our creed, may a fair and religiously neutral government and equal protection under the Constitution unite us all.

With these reflections, let us turn our hearts and minds to building a society where hearing all voices is not radical. Thank you all.

You can tell that the mayor isn’t exactly sure how to respond, tripping over himself when saying “thank you.”

The invocation deserves praise, though. It’s positive. It’s upbeat. It’s optimistic. There’s absolutely nothing wrong with it. There’s no reason to think a Satanic invocation would be any different. Yet these same leaders are wasting time and money trying to make sure they never have to listen to a voice that they prematurely deem offensive.

If they didn’t like this week’s invocation, they should blame themselves. 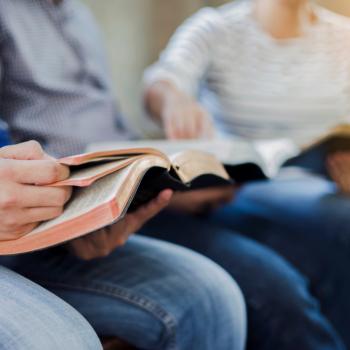 January 16, 2020
Québec Takes Religion Out of "Ethics and Religion" Course in Public Schools
Next Post

January 17, 2020 Kanye West to Appear at Rally of Christians Hoping to Spark a "Great Awakening"
Browse Our Archives
What Are Your Thoughts?leave a comment