While their actions didn’t prompt further discussion that night, someone in the city is furious, apparently, since he wrote an angry letter to the local newspaper:

Imagine how weak you have to be to whine about city leaders not playing along with your personal favorite ritual. That guy didn’t whine about their votes, or their concerns, or their proposals. He chose the least substantive part of the night to complain about.

It’s not the first time the mayor has done this. Now she has company, given that Magill just got elected to her position. That’s how change happens. Now maybe a few of their other colleagues will join in… or just vote to get rid of the mindless ritual altogether. 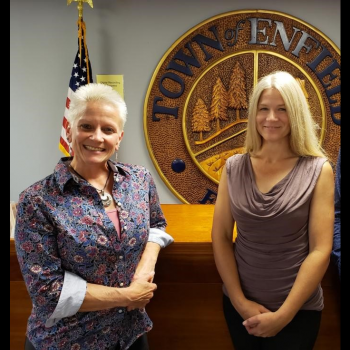 January 14, 2020 At Urging of New Member, Enfield (NY) Town Board Gets Rid of Pledge at Meetings
"According to Cracked, there's enough Jesus foreskin in circulation to make several entire penii."
Matri Saddleback Church Counters Southern Baptists by ..."
"I don’t think either of us is getting what we want, I just know what ..."
EdmondWherever German Priests Plan to Defy the Catholic ..."
"Alberta never fails to disappoint. Along with racist anti-maskers and law breaking pastors they now ..."
Socialist Ninja COVID-Denying Pastor Arrested and Charged for ..."
"They are trying to change the meaning of the words so that they can straw ..."
BensNewLogin COVID-Denying Pastor Arrested and Charged for ..."
Browse Our Archives
What Are Your Thoughts?leave a comment