Megachurch Preacher: I Pray to God That Iranians Live in Fear of Donald Trump

What does it mean to “Make America Great Again”? Apparently, frightening the hell out of Iran.

That’s according to Pastor Terri Pearsons, daughter of televangelist Kenneth Copeland and leader at his Eagle Mountain International Church, who praised Donald Trump for the death of Iranian Major General Qassem Soleimani during a Sunday service last week.

Because nothing says “I love Jesus” more than murdering someone.

After reading and celebrating a couple of Trump’s tweets, Pearsons issued a prayer asking God to terrorize Iran.

Jesus asked people to turn the other cheek. This megachurch preacher wants citizens of another country to live in fear that a deranged president might bomb their faces. Members of her congregation presumably consider themselves “pro-life.”

I guess they never learned how cognitive dissonance works. 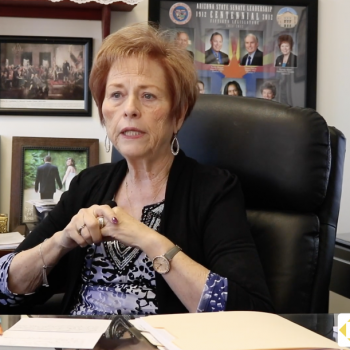 January 11, 2020 Trump’s Faith Adviser Invokes “Superior Blood of Jesus” to Defend Trump's Lies
Browse Our Archives
What Are Your Thoughts?leave a comment